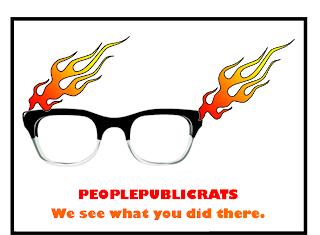 I'm so fed up with politics and government that I am starting a new party of all disenfranchised voters and I'm calling it the Peoplepublicrats. It's the new party of logic and fiscal responsibility, fueled by the shared fear of no retirement and eventual economic Hades for all flipsters.

Our party logo will be giant reading glasses, signifying the fact that we actually read printed media, and we're burned by what we see. Perhaps with flames, for emphasis.

If I handled my childhood allowance as poorly as our government is handling the funds within their administrative oversight, my Dad would have just kept it.

Let's target a few examples. If the Internet (that bastion of all that is true) is to be believed, our government is currently paying for the following things (fact checkers, I'm too busy birthing a movement to dig deep):

1. A soccer field for the detainees of Guantanamo Bay: $750,000? (Five years ago, that prison that was supposed to be closed by executive order, Mr. O. If the detainees are "prison worthy", I'm not concerned about their lack of soccer or hobbies. After all, they also have yoga.)
2. Wasteful daily printing to the tune of hundreds of millions of dollars. I know a thing or two about the Congressional Records...namely the Federal Register that used to come in a ridiculous number of installments per month. Working in a medical billing capacity, I had the job of opening those envelopes, reviewing the content and filing them in one of many books that made up a wall of my office. The thin, see-through paper was typed in a handy 4 point font (I'm guessing) that no one could read.
3. 25 Billion to maintain buildings that are unused or vacant.
4. 500 million on a program to see why a five year old can't sit still in kindergarten?

Do I have to be the one to say "cray-cray"? Get ready to cut a check for a few million to yours truly (my fee as your feral accountant). If a decision has to be made, I'll solve those four budgetary train wrecks right now:

1. Guantanamo: Close it. YOU said it's a done deal, Mr. O.
2. Wasteful printing (and tree murder): Stop it. It's not your money you are wasting. It would make more sense to print it on toilet paper if the plan is to throw it away. At least it would have served a purpose. Go digital. The Kindle-gressional Record would be fine.
3. Money Pit buildings: Fill them with the homeless, sell 'em at a loss, or encourage new businesses with a great deal on the properties. Tear 'em down, for crying out loud! Quit shoveling our tax dollars into a useless shell of real estate.
4. Kindergarten wiggle worms: He/She is five. Be real. Worry about the non-wiggler. Years from now, we're all going to be talking about how he was a loner...

See how easy that was? Now all those funds can be used for more important things, like shoring up Social Security so every politician from now till I die won't be holding that over the heads of Boomers and retirees (who put their money into it their whole working life).  Hey, I never thought it was the greatest idea, as government programs go, but play by the rules.  Americans who contributed to Social Security have expectations.

Peoplepublicrats, here is the task before you: find out which of these fine politicians are making a habit of supporting waste, pork barrel projects and general fiscal misconduct. Vote 'em out. Next, if common sense doesn't rear its head in Washington soon (very soon), be on the lookout for our Peoplerepublicrat Candidate for 2016. We might have to step in and shake it up a bit.

And knock it off with the Charlie Sheen suggestions! Just because he can party,  say "winning" when he is in a awkward situation and acts like he lives in his own world does not make him a politician.

Come to think of it, don't erase Charlie yet.