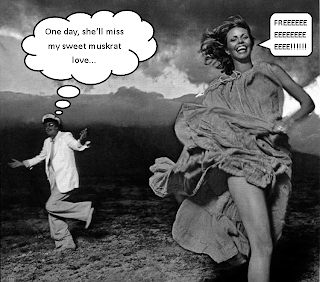 The Captain and Tennille are getting a divorce? Flipsters everywhere are weeping, as we were exposed to their musical lovefest at their peak (1974-1975).

I'm not sure any business venture would be enough to keep me together with anyone (just ask any of the bosses I've submitted resignations to over the past 30+ years; love nor money will not keep me on the job when I am DONE).

Wasn't there some love floating around at one time? Don't tell me that this once happy couple never, ever whirled or twirled or tangoed while they were singin' and jingin' the jango. If I'm wrong, Daryl Dragon and Toni Tennille were the biggest posers on the planet, so let's give them an award for that, at least. Grammy peeps, could you whip something up, perhaps with a snappy dance number?? Miley Cyrus, would you consider exchanging your teddy bear for a huge muskrat backpack for your performance on the Grammys? Pharrell, could you whip up a musk-rap? Show the love, music industry.

What a day for icons. The Captain and Tenille divorce announcement comes on the heels of the Today show anchor Matt Lauer revealing that Froot Loops are actually all the same flavor and Captain Crunch didn't really serve in the military.

Call me sentimental for wanting to believe The Captain and Tennille were the real deal. I'm sure "The Captain" was a military man, right? Perhaps Tennille is trying to tap those sweet, sweet VA benefits.
Posted by Cherdo at 9:55 AM