The Butler - Out of the Box 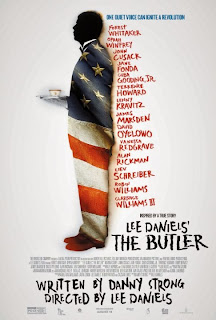 Lee Daniels' movie The Butler (PG-13) appeared in a certain red colored rental box lately, and we decided to give it a look.

Thirty years of butler service in the White House and seven presidential terms make a great backdrop of history, but this is very much a tale about an individual shaped by his own history - the butler, Cecil Gaines (Forest Whitaker). There's plenty of big names in this movie; we catch a glimpse of Mariah Carey as Cecil's mother early on and of course, the much hyped appearance of Oprah Winfrey as his wife. Who am I to split hairs and say what they did right or wrong, am I an actress? It wouldn't matter, anyway - this movie was carried along by the guys (sorry, fems). The butler's relationship with his sons was the central focus. It's the 60s and civil unrest is everywhere: assasinations, war, politics, civil rights and black panthers. Flash me a peace sign and somebody put on some Crosby, Stills and Nash.

I'll skip the spoilers and go straight to the question at hand (drumroll please): Was this worth your rental bucks? Sure! Oscar-worthy? Probably not, but there's a whole list of films that aren't on that list.
Posted by Cherdo at 4:45 PM