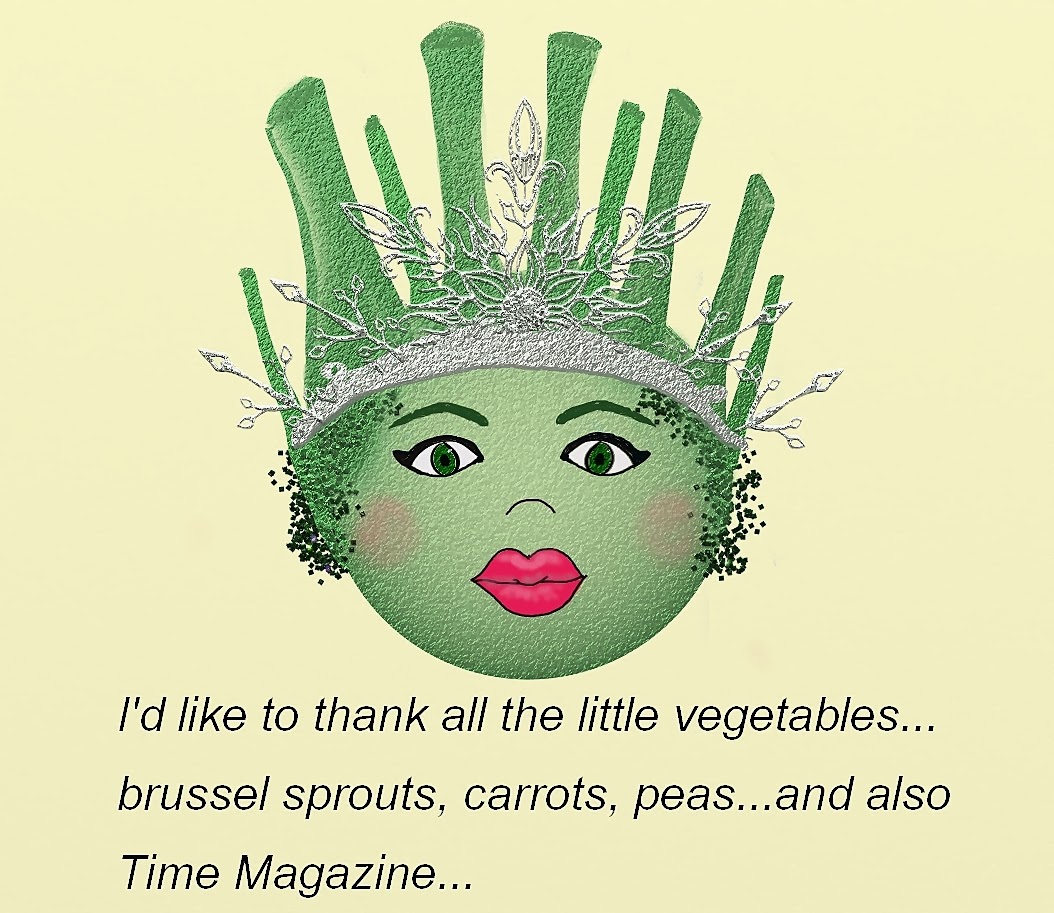 A few weeks ago, Time Magazine announced that The Kohlrabi was the new fad vegetable (and I'm capitalizing it because I just don't know how one should address the vegetable of the year and I've just watched Downton Abbey).

Since when do we have a vegetable fad of the year worth mentioning?  Did kohlrabi lovers push for this choice or is it just a given?   Those sick, sick puppies.  Is there a kohlrabi lobby?  Was there a vegetable beauty pageant with a panel appropriately balanced between farmer judges and model agency reps?  If so, how did this not interrupt the Olympics?

I've given other trends a try, selectively.  I'm still not every going to say YOLO and pump my fist in the air, but I have put birds on things, watched a reality television show (but not twice), read a book that had a vampire in it, watched a show with a zombie in it, read The Hunger Games and used the most nonsensical phrase on the planet, and my favorite - the ever popular "cool beans."   Oops...strike that last one.   Totes McGoats slipped my mind for a minute.

This is one trend I can't participate in because I don't understand it.  What is the world am I supposed to do to add more Kohlrabi to my world?  Will the neighbors mock me and say ugly things like, "Sure, she's nice enough...but I notice a real lack of kohlrabi."  Must I wear clothing with kohlrabi, or perhaps woven fabric from kohlrabi fiber?  Is kohlrabi decorative?   Will kids be denied a place at the cool kids' table in the lunchroom if they don't have kohlrabi in their lunchbox?

I'm not prejudiced; I've actually planted kohlrabi in my garden and it grew really well.  But that was pretty much a bummer, too; we only did it because they looked weird and we had a couple of tilled rows we hadn't planted.  The useless mad scientist portion of the garden that held kohlrabi, peanuts, purple potatoes and weird white carrots that actually flourished.  I believe they flourished to to spite me and to pull my attention away while a mystery critter systematically did a number on the tomatoes.  Tomatoes are in the useful part of the garden, because I really DID want to grow, and I would actually pick and eat them.  I blame kohlrabi, as the other weird plants were underground.

I appeal to the person who made this decision to reconsider.  I've always thought of kohlrabi as just a freaky goth turnip.  It looks a little crazier, but it is sitting in the same pew, metaphorically speaking.

Perhaps we can look at cousin turnip's history for a window into the future of  kohlrabi.  You may have noticed that cousin turnip has never been in high demand at restaurants, for example? I've never seen a sign out front of a fine dining establishment or fast food that boasted "we have turnips!" You know why?  Because it's a turnip; a root that someone decided to gnaw on one day.  Aren't we brave enough to say that person was wrong?  I think we may be going to our gardens and pulling things out of their dirt bed that should have been left there.  Isn't that a more respectful approach to Mother Nature?

I predict people will not embrace this idea.  It's hardly the cute kitty of the veg world.  If I handed you a kohlrabi right now, would you know what to cut off and discard - and what to eat? What will you make with it?  Kohlrabi sorbet?  Kohlrabi Lorraine?   Baked beans and kohlrabi.  Do you keep in on the counter or in the refrigerator?  Is it okay to give them as a gift - to someone you like?  And what is up with all the wacky stems?  (I do like to trim the stems and flip the kohlrabi over and pretend it's a spider.  Shhhhhh.)

Lastly, I want to point out the kohlrabi sounds a lot like "coal robbery" which will only alarm thousands of West Virginians who work in the coal mining industry.  Why upset them  needlessly?

Note that I avoided selfishly whining about the fact that an ugly vegetable has been lauded by Time Magazine before I ever was.  That puts things in perspective for me.