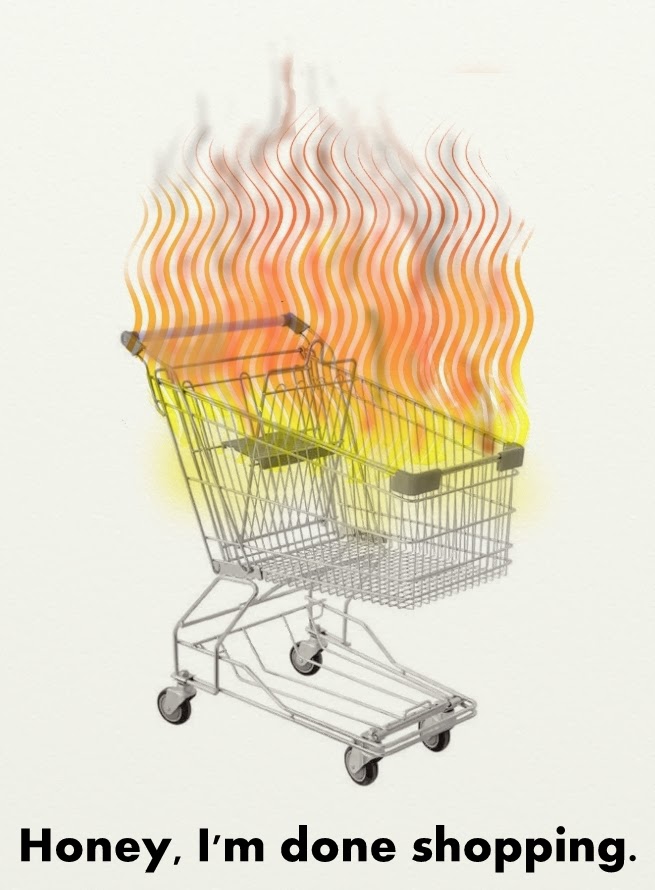 This week in Atlanta, a man entered a Kroger store and caused a disruption.   He doused himself with rubbing alcohol as he ran through the store, and the police were unable to subdue him with a Taser because of the flammable liquid.  In the end, the guy set himself on fire - nobody knows why, thus far.

I'm no police officer, but as a supportive member of the community, I'd like to offer my help in solving this mystery by suggesting some possible reasons for the man's actions that they might not have considered.

When this gentleman started flipping out, was he behind a group of ladies with giant notebooks full of coupons?  They travel in herds now, and it can be dangerous.   Once minute,  you're cruising along with your shopping cart, just picking up a few things.  Up ahead, you see that sale item you're after...but the herd forms in front of you.   You're trapped.  Instantaneously, they all start talking at once and throw around theories about coupon doubling, senior deals, and BOGO.   Suddenly, they realize they haven't established a dominant couponer in the herd, and they begin to nitpick.

If he found himself in this situation, that may have been when the gentleman made the decision to get the rubbing alcohol.

Was he distracted by the behavior of over-tired kids in carts?   I sympathize with him, if that is the case.  I'll leave the store without the stuff I wanted to get because of a tantrum parade or scream-o-rama, and I love kids.  I understand the children's discomfort, because hard wire grocery carts are fine for soda, cat litter and cereal, but not the place for a kid to hang out for prolonged periods of time.   It's jail on wheels.  Adults get immune to their plight.  I start to look at them like I do groceries and produce:  that little girl is nice, that infant isn't ripe yet, can I get a refund on that screaming toddler.  Avoiding your standard kid-having-a-bad-day is tough, but why do they all end up in the grocery store???

Men aren't cut out for this level of stress on the move.

Did the guy have a cell phone with text messages from his wife?   I've been that wife, unfortunately.  I muse about how easily this could happen:  I think I need butter, and my husband goes to the store for me.  You know what is great to make with butter?  Hollandaise sauce.  If only I had lemon juice.  I text him.  Going to the frig, I pull out the asparagus. This is going to be so much better with Hollandaise.  Now, it looks like I might not have gotten enough...I'll bet it is still on sale.   I text him, adding tips for picking out good asparagus.  Yum.  You know what?  If I'm going to make the Hollandaise, and basically I'm the one who really likes it, there's going to be leftover sauce.  If I had Canadian bacon and English muffins, I could make Eggs Benedict in the morning.   I text him.  My son walks in and asks for a 9-volt battery. I text him, thanking him profusely.   And all that thankfulness reminds me that I need to send someone a thank you card, and darn if the box isn't empty.  I text him.  A fireman responds to the text.

Anyway, officers, you have a hard job and a lot of cases to solve - I'm just trying to help and I've got enough grocery store experience to qualify myself as an expert.  If you want to stop by my house for more suggestions, just call and I'll be happy to discuss possibilities.   If there's any chance you'll be driving by the supermarket, text me, I may need coffee.  And creamer.