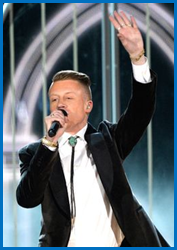 I'm too old to watch the Grammys, so I always do.  Call it Flipster rebellion.  Pretty soon, I'll be sassing my mother again, if this trend continues.

Newcomers Macklemore and Ryan Lewis burst on the scene in 2013 with hit after hit.  Where were these guys hiding?  Did they just wake up one morning and say to each other, "Let's be awesome." Talent is talent, and these guys appear to have it.  The idea that they made a record without a recording contract is just perfect;  I love hard work and passion.  They appear to have plenty of that, too.  Kudos, young men, kudos.  You deserve the accolades.

Number one, in my world, I choose not to use bad language;  I could do a whole month of posts about that - but this is not that kind of blog. Young people, clarity will sink in as you have children.  Consequently, I get irritated when a catchy tune is stuck in my head, but I can't sing it! The lyrics are a decidedly foul-mouthed rhythm play and, as previously stated, I choose not to use that language. Freedom of choice, right?  That's my choice.  However...curse you, Thriftshop, with your tag poppin' tune!  It became stuck in my head before I learned the lyrics.

I'm the one who washes Granddad's clothes, by the way.  When I'm done, you can have them.  Not a hater.

On to issue number two:  I do pay attention to what is said, regardless of whether I agree or disagree or just don't care about an issue - I want to understand a person's perspective.  In my mind, if you have the attention of 28.5 million viewers and you have a message, make sure that message is clear. Late in the show, the Macklemore and Ryan Lewis performed their song Same Love  (save your comments...this is not a blog about controversy...we're not having an us-versus-them-comment-a-thon).

Towards the end of his performance, Macklemore emphatically cries out "till the day that my uncles can be united by law."  Now, considering the star power and marketing power attached to each word said, I'm sure the comments from stage are worth tens of thousands of dollars, but since you don't pay up front, a few more for clarity would be great.

This is a grammar gripe. If anyone was uniting uncles by law, that would be strange.  Most brothers aren't that close.   Also, if any state took the lead, I'm thinking it might be West Virginia, not California.

West Virginia has long been accused of being cousin marrying hillbillies fighting with their Uncle Daddies and kin.  I know, I was reminded of it frequently (hello...born in WV) growing up in Ohio.  I was sent to speech class to get rid of that WV accent.   But I was still WV born, so the hits keep on coming.