WASTE (What A Stupid Time Exterminator) 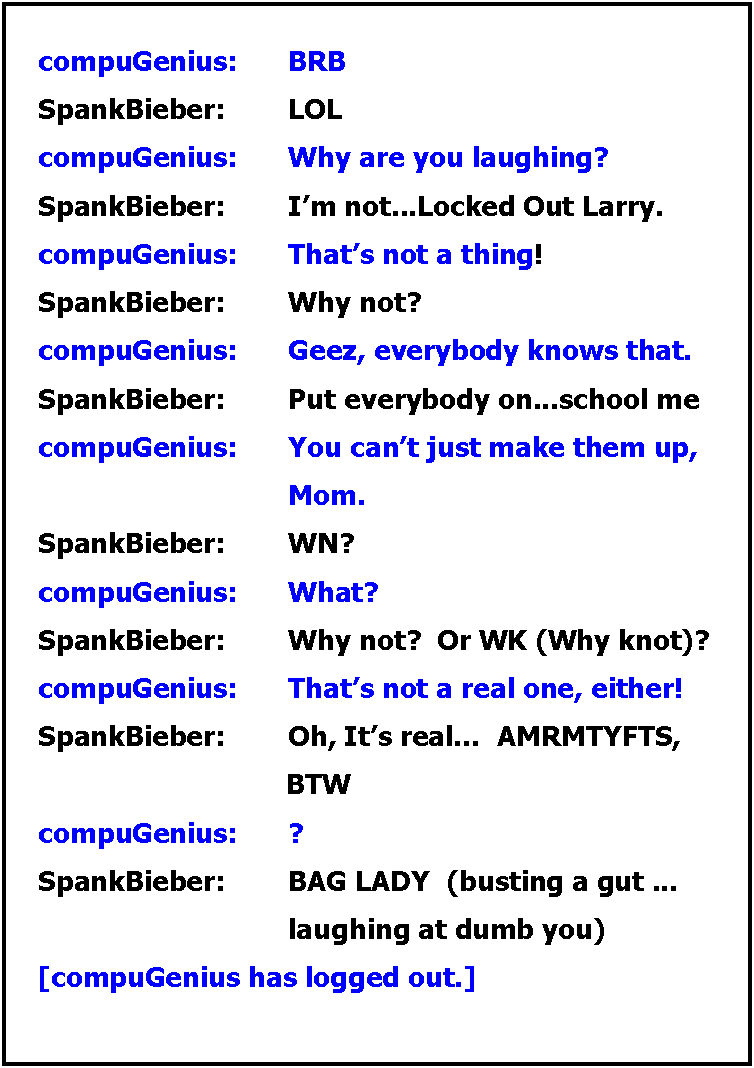 This started out easy enough.  As a tip of the hat to the fact that I survived another birthday, I thought I'd share a list of brand, spanking new acronyms for those of you who find yourself on the flip side o' 50, like myself.  With great attention to detail, I did a last minute check to make sure I was using the correct term, which I was sure would be acronym.

Why is there any question,  you might ask?  The truth of the matter is that techies and anti-flipsters (under 50) are frequently adding new and interesting jargon that I don't understand.  Why do I not understand it?  Because someone, other than yours truly, invented it and I'm just now catching up to the the "tech hip."  I'm not in the loop, as fate would have it.

Hold on just a minute, did you smirk at my blog? Knock it off!  Can you define botnet, Ivy bridge, anti-poopsocking, crowd funding, getsure or exFAT (not related to weight loss)?

[Note:  If you can tell me the definition without further investigation, why are you reading my blog? You might actually be smart.  Go Google something and save mankind.]

All I want to know is whether or not the initials used in chat for such things as "be right back" (BRB) or "talk to you later" (TTYL) are called acronyms.   Not such as easy question, as further research revealed the term "initialism" or "alphabetism" might apply, or possibly "text shorthand."  There is also some discord as to what to call abbreviations that some speakers pronounce as letters and others pronounce as a word, like IRA.  Or, consider the acronyms that are almost universally pronounced like words (RADAR).  Or, heck, just skip all that and find yourself sucked into the controversy that surrounds those that say "triple A" instead of AAA.

For crying out loud, who would have thought there was so much information to learn from a bunch of jokers who won't type out "see ya later."

Maybe the world isn't ready for my new flipster acronyms after all.  It's your loss. But just for the record, I want to let my children know that WMT means "where's my tupperware?" and IBAYHST is my personal text shorthand for "its been at your house since Thanksgiving."
Posted by Cherdo at 12:18 AM