Basically, I'm a rule follower.  I figure there has to be a perfectly legitimate reason for creating a rule in the first place, even if I don't know it and even if I disagree.  I can usually empathize and understand why the rule is in place.

As far as "outside food" in the movie theater is concerned, I get it.   Though I complain of the cost of a night out at the movie, the news media has enlightened me to the financial burdens on theater owners (by distributors) and the need to use the concession stand sales to actually make money.
When I see 8 cents worth of popcorn on sale for $8 a bucket, I don't like it but I do want to stand up and clap for capitalism.  It's a phenomenal feat that any business person can get the public to pay $8 for 8 cents worth of anything;  we all claim to be so frugal and savvy.  Score one for capitalism.

Which brings me to this observation, and the reason for I dub this Lie # 103:  You wouldn't believe the outside food I've seen in movies.

Three guys had about three feet of sub sandwiches at the last movie I watched.  Where did they hide that, they don't even have purses?  Even the projectionist could see that feast.  I saw a lady pull can after can of soda out of her tote bag and pass it down the line to a baker's dozen of children or dwarfs, I'm still not sure which. There were some really low voices inquiring about the availability of Mountain Dew.  Then I got to hear another guy chastise some kids about the package of chocolate chip cookies he dropped - apparently, they were fully committed to forming a search team on the floor.  The big guy was going all lab tech on them, thankfully.

It made me think two things:  1) These people are too hungry to go to the movie.  2) Golden Corral needs to start showing movies.

This is a bit of a sour grapes confession.  There is one person in the world who is more of a rule follower than me:  my youngest son, Gonzo.   I didn't make him this way;  he arrived out of the box in rule follower mode.  At a young age, he asked me to spit out my gum before we went into a movie (no joke).

"That's outside food, Mommy - see the sign?" he reminded.

Oh, how I'd love to sneak a $1 box of candy from the drug store past the concession.  It looks the same, and I'd have that added high that comes from not paying $5 for the exact same box that the concession sells.  But there he stands, the greatest hero a theater owner ever had - and I don't mean the Iron Man and the other Marvel characters pulling in viewers:  it's Gonzo, the Fearless Defender of Overpriced Concession. 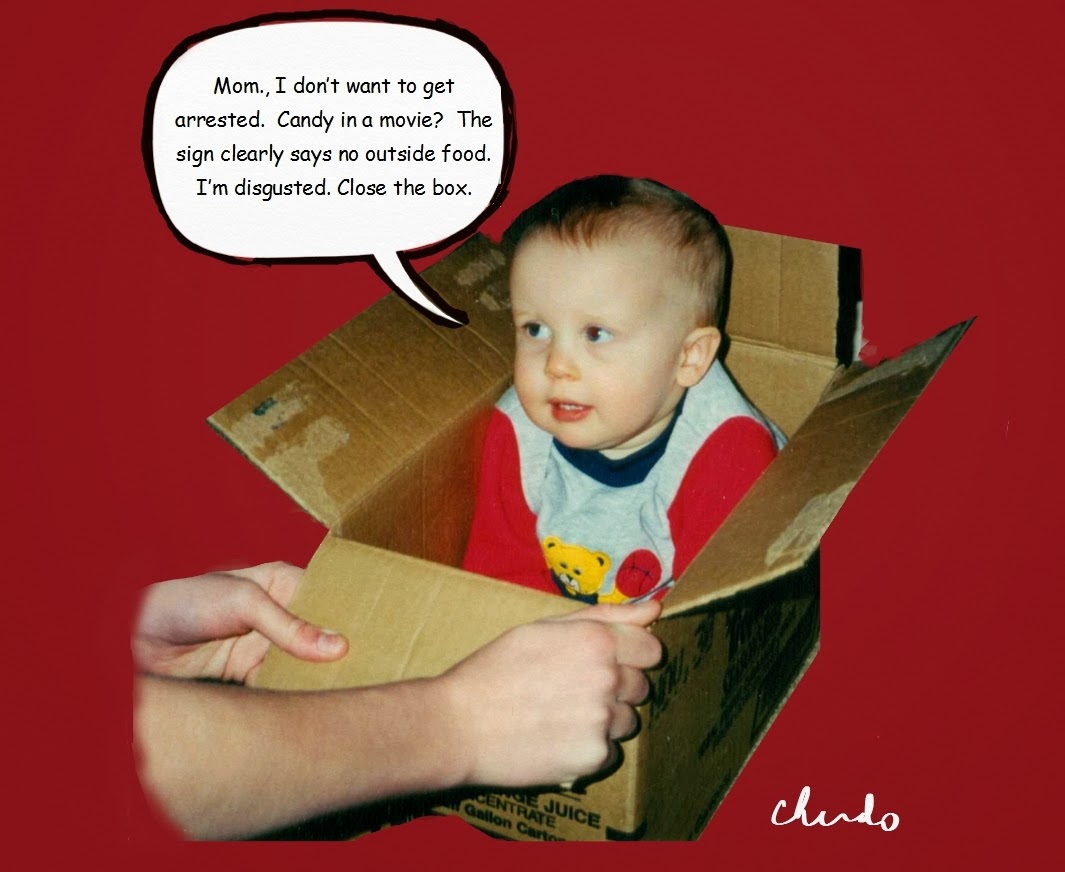