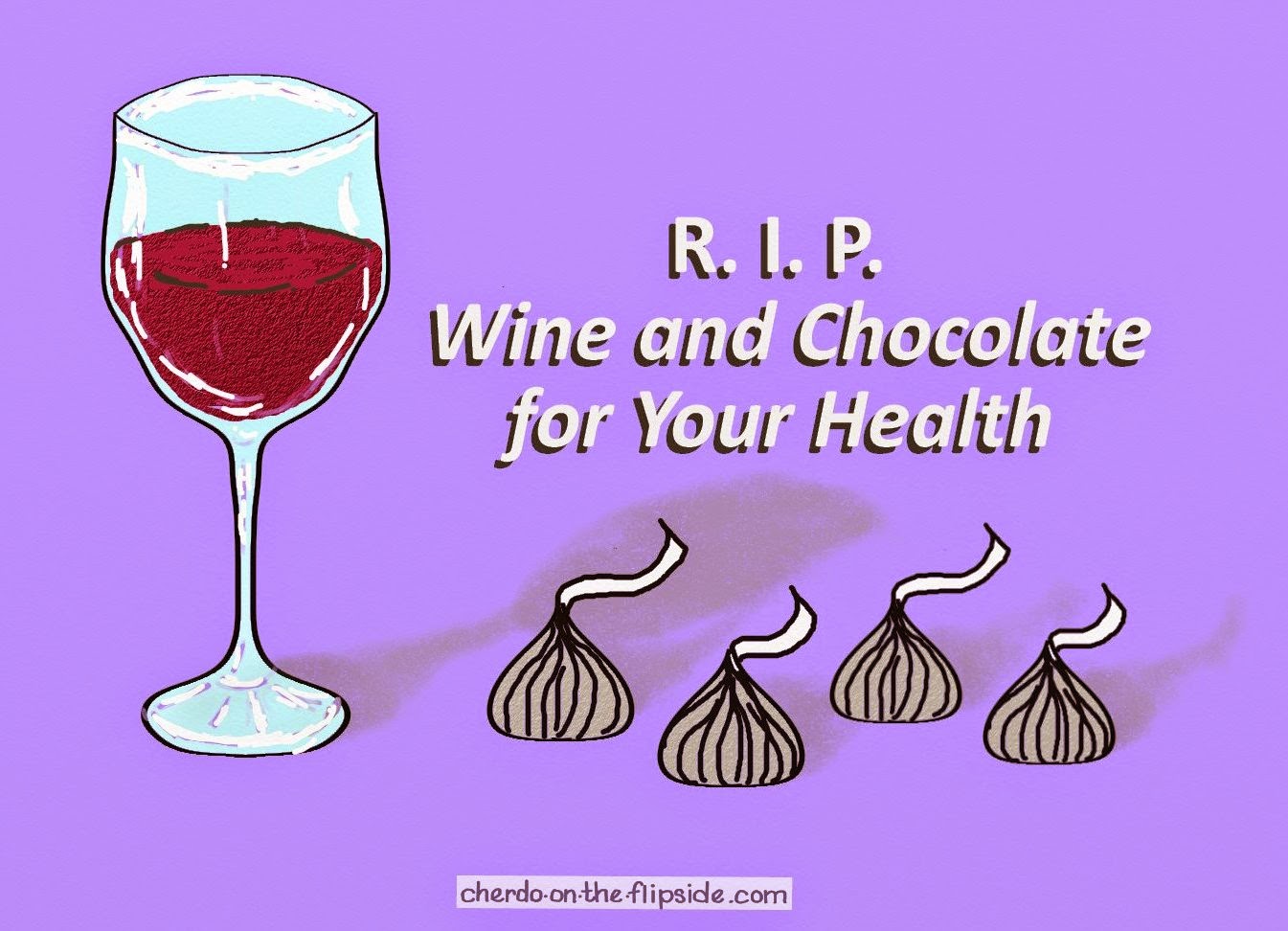 Why do I watch the news?  It only ends in heartbreak.

Oh, Resveratrol, how could you betray me?  In my heart, I had such high hopes for you!  You were the reason I believed the experts who told me that a diet high in fat and cholesterol was magically and inexplicably beneficial, if only I accompanied it with wine bearing sweet, sweet Resveratrol, the substance that made all French women look like French women (I'm told that is a good thing).

I'm one run-on sentence from weeping at the thought of it all.  But there's more...

Resveratrol, why did you have to drag chocolate into your false tale of health and age-defying ability? Children crave bunnies made of chocolate.  Housewives cling to hidden chocolates carefully stashed behind the baking soda and spices on the bottom shelf to the right of the stove...oh, wait...NO!  I must be talking out of my head!  To clarify, there is no chocolate in any cupboard near any "alleged" baking soda!  I'm under duress from the sting of the Resveratrol betrayal.

Dr. Richard Semba, you seem like a good man...how could you lead such a study?  Who attacks the long held notion that alcohol (wine) and sweets (chocolate) pave the path to health - and expects the public to embrace the news?  Scientists were the ones who told us wine and chocolate were both good for us!  Don't you realize that you may never get another party invite from a woman?  We're roughly 50% of the population (and I can massage that statistic to make it say anything I want it to say - don't make me go decimal on you).

Will science bake cupcakes for you, Dr. "Tricky Dick" Semba?   That is, if you're not already developing some new mad-scientist-insane study, hellbent on establishing guidelines that do not include something wonderful, like cupcakes, as part of a healthy diet!  Look in the mirror and ask yourself if this is the legacy you want to leave behind, with no crumb trail to follow?   It's not too late.

Don't try to rationalize my ravings (even I'm not compelled to do so)!  Your facts and numbers are a blight on late night snacking.  What are we left with now?  Tic Tacs, sparkling water and string cheese?  How dare you, sir.  HOW DARE YOU.

The news anchors tried to soften the blow with a follow up story that claimed swearing is GOOD for you, if you don't do it all the time.  Great.  Something I don't want to do - how would I take advantage of that emotional outlet? Must I use all the keyboard characters as an outpouring of "suggestive" swearing characters?  &#^*@_)*!!!   Now that just looks dumb; it's not even mildly providing angst relief and it is accompanied by the reality that in my case those characters represent something like "holy moley" or "aw, man!"

[By the way, I drink coffee from 7 to 9 a.m.  I'm not reading the news, watching the morning shows or opening the front door until I'm finished with my coffee.  I'm not giving up the coffee, downer scientists.]
Posted by Cherdo at 7:00 AM