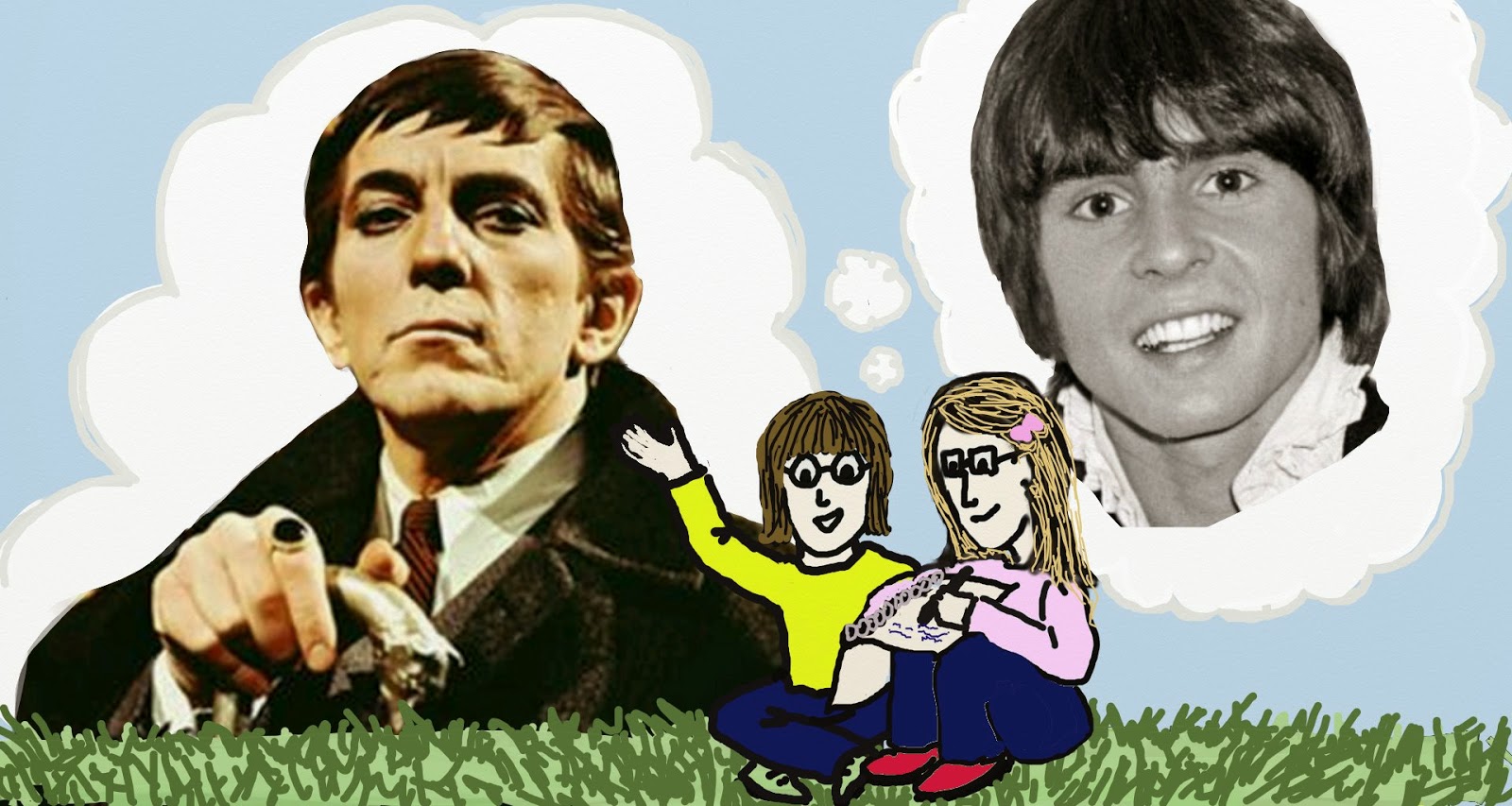 Now, hold your horses a minute...lest you think we were brilliant savants (sorry, Patti), I have a confession.  We had a particular writing style that basically revolved around our favorite television shows.  Why make up new characters when you can find perfectly good characters on all the channels (which was three channels, by the way).  We were probably doing this around the ages of eleven or twelve, blissfully free of the barrage of media that surrounds today's young people.  Limited exposure hyper-focused our attention on the one thing we did have access to; and so. it makes perfect sense that our view of the world was very much impacted by television shows of the sixties.

If we really, really liked you - you could be a top star of the stage of the Marcia Drive Playhouse!

Dark Shadows was a favorite of ours.  If you're unfamiliar with the show, it was the American gothic soap opera-like tale of the Collins family of Collinsport, Maine - and their centuries of bad luck with women, compounded by vampirism, witches and werewolves.   You know, the typical New England family.

The main character was Barnabas Collins (played by Candadian Jonathan Frid).  The story jumped back and forth from the 18th century to the present day. Nothing about Barnabas Collins was handsome or attractive, but the story line included at least two women he was involved with in the past, and two in the future - both played by the same actresses.  In the present day, he also had Dr. Julia Hoffman, who was alternately trying to help him or lusting after him. Again...not attractive, and yet this all seemed plausible to an impressionable kid.  Jumping back and forth in time - totally in to it.

Even as kids, we knew this was a good start, but we could add so much to this story.  The plot needed to pick up the pace a bit, and that is where Patti and I came in.  Armed with pencils and spiral notebooks, we'd write page after page, act out the parts with each other, and cracking ourselves up.  We thought we were brilliant. You think like that as a kid - everything is bigger!

Armed with this new found satisfaction and abundant faith in our ability to be legends on our own porch, the plot lines of our version of Dark Shadows got wilder and wilder.  We named our episodes with ridiculous titles like "One Good Bite Deserves Another" and added special guest stars, like Monkees Peter Tork and Micky Dolenz.   Teen heartthrob, Bobby Sherman, popped in scenes for a few lines with vampire Barnabas Collins. David Cassidy fought for the love of this character or that one.  It was our play and we could do whatever we wanted to, so every celebrity we loved got a starring role, at one time or another!  If Marvin  Hamlisch lived anywhere near us, we could have talked him into a musical collaboration, I'm sure.  And we laughed at our own goofyness (is that a word?) till we were half sick.

Then I grew up. Bummer.  Everything is smaller and more jaded.

Years later, I was standing in a hotel lobby with a friend when Peter Tork, Davy Jones and Micky Dolenz walked in.  Patti would have appreciated it.  Of course, I asked for autographs; I'm a geek.  Davy Jones was so kind and talkative that my friend and I were inspired to ask Micky Dolenz for an autograph;  he informed us that he didn't have time, he was checking in - with an extra dose of "I'm-so-put-out-being-me" added for effect.  Our confidence went down the toilet, but we had nothing to lose - we were adults and we didn't know anyone in the lobby who would gossip about how we got shot down by a bitter Monkee.  What the heck!  We walked over and talked to Peter Tork.   He was lovely and chatty and I had a moment of childhood excitement revisited - I was talking to someone I had seen a hundred times on the boob tube, and he was actually civil.  Obviously, my standards lowered after the Dolenz smack down...but still...

While we were enjoying this moment of revisiting childhood with Peter Tork, Micky Dolenz came back over and said "Did you want an autograph?"

"No, thank you," I replied kindly and added a dorky smile for good measure.

I'm weird like that. No matter how old I get, I always remember the Marcia Drive Playhouse rules:  no one is allowed to take themselves that seriously.

Recently, I watched an episode of Dark Shadows on Netflix.  Our plays were much better.