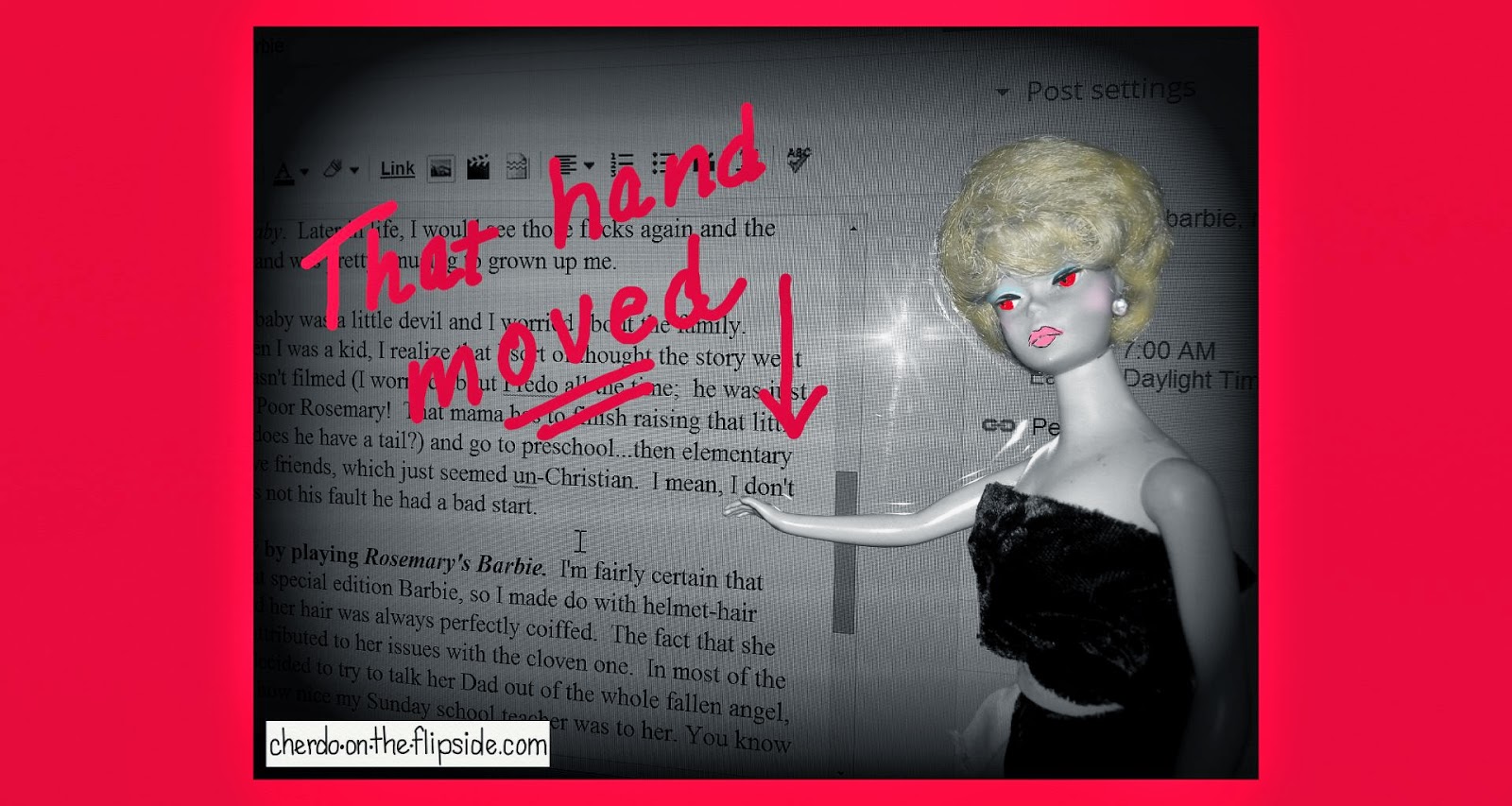 Realizing there are only so many ideas floating out there in the world, we can expect to see some stinkers.  But Rosemary's Baby with Mia (the only Rosemary) Farrow didn't need a re-do or a complete coat of stinkeroo.  It was a truly scary movie back in the day.  Part of this may have been my age.

The original Rosemary's Baby came out in 1965; I'm sure we saw it later on. As a six year old in 1965, I was an enthusiastic participant in one of our family outing favorites: the drive-in movie.  Dad would announce that we were going to the movies (about two miles from our house) and then add, "put your pajamas on." Whaaat??  We'd mope and complain about that because there was a great playground at the movie theater, right in front of the screen. Meanwhile my Dad and Mom had a perfect plan - the kids wear their pajamas, later they fall asleep before the end of the first kid-friendly movie, then they totally crash and snooze through the second movie and all Mom and Dad had to do was carry us in to our bedrooms when we went back home (back in the good old days, when I was totally tote-able).

My sister and I saw this pajama plan differently.  Possessing the early pangs of peer pressure, we knew we'd be dragging our little brother up to the well-lit swings and sliding boards in front of 50-100 cars full of our fellow movie fans.  Statistically, it would be next to impossible not to have a classmate or two in one of those cars.  Apply Murphy's Law to the mix and the one classmate present would be the biggest taunting jerkasaurus the Austintown School System ever created.  Days later, I'd likely find myself in the elementary school lunch room, trying to enjoy my mystery vegetable and mashed potatoes with hamburger gravy.  In full view of all my dorky, prepubescent, glasses wearing peeps, the cry of the jerkasaurus would ring out with some insult that involved the phrase "at the movies in your jaaammmmiiieeeessss!"

Because I never did fall asleep, I was privileged to see some movies that I didn't understand and I'm sure no one ever planned for small kids to see - like Sonny Corleone getting wacked in The Godfather...Linda Blair's head spinning like a top in The Exorcist and Rosemary's Baby.  Later in life, I would view those flicks again and the full realization of how much I didn't understand was pretty amusing to grown-up me.

Rosemary's Baby was scary, though.  Her baby was a little devil and I worried about Rosemary's family dynamic. What happened after the movie ended?  When I was a kid, you have to know that I sort of thought the story went on...we just didn't get to see it, because it wasn't filmed (I worried about Fredo from The Godfather all the time;  he was just a poor decision maker in the Mafia world).

Poor Rosemary!  That mama had to finish raising that little demon;  he has to have his diaper changed (does he have a tail?) and go to preschool...then elementary school.  I worried that Satan Jr. wouldn't have friends, which just seemed un-Christian.  I mean, I don't want to encourage him to be accepting of his devilish lot, it's not his fault he had a bad start.  Perhaps me and my friends could be positive influences ("Stay away from the neighbors and your step-dad...they got you into this mess.")

I'd act out these scenarios in my own way by playing Rosemary's Barbie.  I'm fairly certain that Mattel was never going to come out with that special edition Barbie, so I made do with helmet-haired Midge.  She was a much less scary baby, and her hair was always perfectly coiffed.  The fact that she didn't bend her legs in the baby buggy was attributed to her issues with the cloven one.  In most of the scenarios, she went to church with me and decided to try to talk her Dad out of the whole fallen angel, devil career that he had chosen and told him how nice my Sunday school teacher was to her. You know - real life scenarios.

As I grew up (sorta), my bedroom moved to the basement, and the sounds of the occupants of our house and shadows on the windows made me have pretty scary dreams.  I'd wake up and see Midge, one of the few dolls I every really played with, on a bookshelf and I'd imagine she had moved a little on her own. Maybe, by playing Rosemary's Barbie, I had cause some bad goo-goo to befall her! Prayers for Midge were offered more than once.  I had a very active imagination, but I'm a seasoned prayer partner.

Last year, my mother sent me a package with some cards and pictures she had found.  Laying on top of the stuff was Midge, now 50 years old.  She hadn't changed much, but she was missing her enviable wardrobe.  Her hair was still perfectly coiffed and she was wrapped in black velvet.  She's still giving me the weird eye look, though.  She sort of stays put now, but sometimes I'm not sure.  As Midge silently observes me typing, it's like she wants input into the blog post.  I don't think I'm imagining it...considering her fingers never did bend, she's a little condescending about my typos.