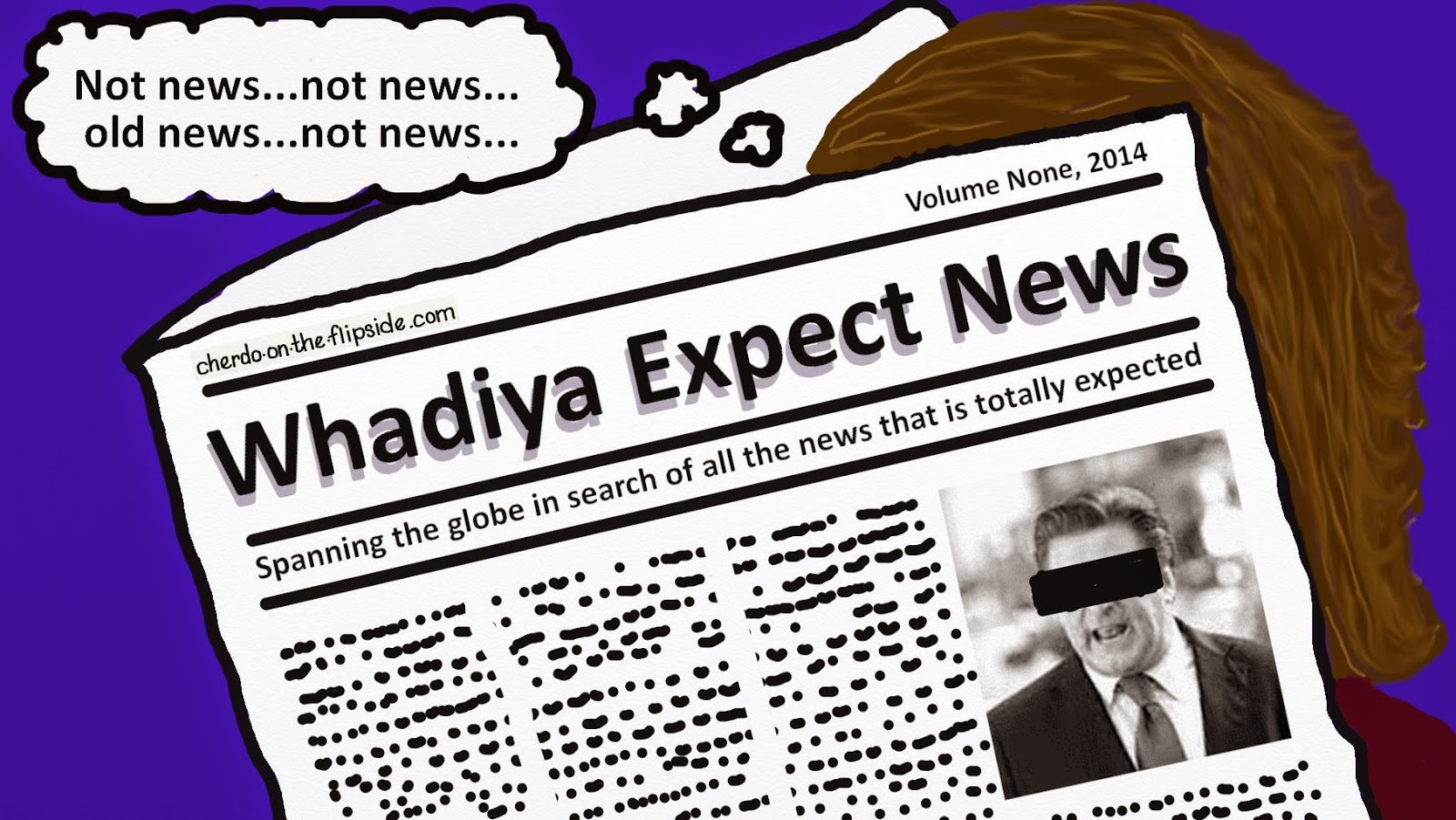 Flipping through the news, I'm noticing a trend of stories that are either not newsworthy - by virtue of their increasing frequency - or the old bait and switch, where the headline says one thing, but the content begs to differ.

The headline says:  The invitation to Kim Kardashian's wedding was leaked to the press.
Really? Aren't they wealthy enough to look in to some "security"?  The Kardashian machine would never let that happen on purpose - why would Kim want anyone to find out about her approaching nuptials? I've long held a theory that the whole Kardashian family's biz is automatically leaked to the press daily, if not hourly. Tell me something new.  Have they hooked up a press release that is leaked whenever someone first flushes the toilet in the morning?  A leak while you leak automated leak would be news.  KK seeking publicity?  Whadiya expect?

The headline says:  The National September 11 Memorial Museum opened.
NBC's webpage noted "The museum opens almost 13 years after 9/11 to tell the story of the victims and preserve the history of the attacks that killed almost 3,000 people."

The page ran a gallery of somber and heart wrenching pictures of the exhibits...  I hate to bring this up, but with all the dough NBC must be raking in, did you really need to put distracting little advertisements between every third picture?  Could this one photographic memorial be about memorializing this tragedy - NOT about ad money?   Apparently not;  whadiya expect?

The headline says:  Alex Baldwin arrested for belligerence.
Alex Baldwin was arrested on the corner of 16th and 5th Streets in New York City for riding his bike on the wrong side and being belligerent when asked for identification.  This is not news.  If anyone wants to know why Alex Baldwin was arrested anywhere, the answer is because he is Alex Baldwin and he gets arrested or irrational on the same schedule as I brush my teeth.  I do love good dental hygiene.  A real news story would be a timeline marking the number of days that have pasted since Alex was arrested last - and it actually be a number larger than one.   I totally expect this.

The headline says:  Privacy laws now tougher to follow.
Healthcare companies are really having a tough time following strict patient privacy rules.
After years of seeing everyone's information plastered on the Internet, government top secrets exposed, a trend of unfortunate naked selfies (that should never be shared with anyone other than psychiatrists), moronic self-injury plastered on YouTube and actual companies that will connect the dots and gather up info like a private detective, this seems like lightweight news.  Sorry, but I have to ask this question:  did you still think you still had privacy?  Whew!  Good thing you read that thinly veiled preemptive warning.

Coming next month:  Huge amount of healthcare data compromised.  Executives declare, "We knew this was going to happen."   Whadiya expect?

The headline says:  A bill to renew tax breaks clears hurdles.
Fifty tax breaks for businesses and individuals are set to expire, and so the heading proudly announced that the bill had cleared hurdles.  That sounds like the bill will be renewed!  Oh, wait...it also says that Congress "voted 96-3 to open the debate on the bill."   Wait - debate?  I thought it cleared hurdles?  Whadiya expect?  Having cleared hurdles...now it has more hurdles.  That's all.

The headline says:  European Courts says Google must listen to privacy concerns.
In Europe, they actually think people have the "right to be forgotten."  They feel their citizens should be able to compel the big search engines to remove information about them.  The article goes on to say that the court decision would apply to other search engines like Bing, Yahoo, etc.

I wonder if the European courts could talk to the American healthcare companies and give them some guidance about holding on to personal information long after they have processed claim data.  Maybe the best way to keep a leak from  happening is to empty the bucket before it happens?   Because you've got all our biz, man.  Unless your whole business is security, you're gonna mess up one day and it will never be a patient file, it will be an entire server full of private information.  Whadiya expect?

Another online article from Time magazine states that "Americans will never have the right to be forgotten."

What?  Europe isn't allowed to have a "right" we don't have...right?   We're a much cooler country. We need the right to be forgotten, if not for ourselves, then for the next generations of goofballs who will have to read the continued antics of the Kim Kardashians and Alex Baldwins of the world.  The time will come when we will need to forget KK and AB.  Wait - just look at the time;  it has already passed!  It's like a quarter past time to forget Kim and Alex.

This might be news: the ever rising need to forget a whole lot of things.   Didn't expect that one.