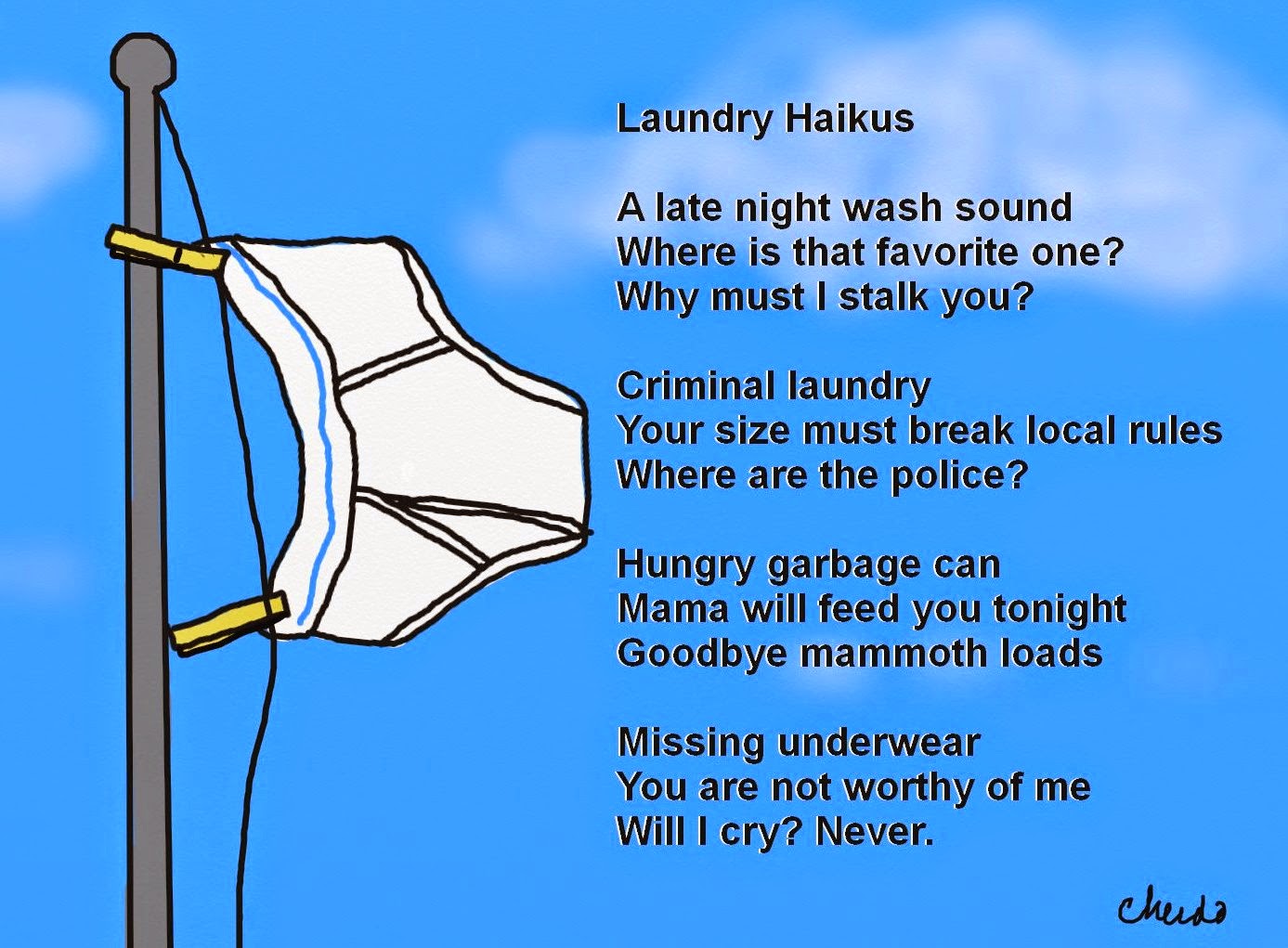 There's more than a few holes in many human evolutionary theories, yet I'm never compelled to jump on the band wagon and plug 'em up.  I have serious concerns about how things happened as recently as yesterday - so stand in line, evolution.

New neural pathways of psychological growth and development in the laundry department are forming every day, however. If you'd like to participate in my somewhat skewed tale of how I've evolved in my approach to laundry - for comparison sake - have at it. Make suggestions for improvement!  I'm willing to add more modifications;  a lot more, in fact.

Laundry proficiency is one of the skills that will never, ever get fully appreciated until it is fully absent. Think about it for a moment. Does anyone ever argue that it is their turn to do laundry?  Can I help you sort whites and darks, Mumza?  Nope-arooni. Any awards for laundry skills superiority? No; it's probably the one area where we don't give a trophy for participation (you're shooting yourself in the foot here, ladies, when you raise an anti-laundrite).

A teenager will wear a pair of jeans till they rot off and forensic investigators are standing over them before they will throw them in the laundry IF they are required to wash their own clothes. When black became the go-to color of teen angst-wear, I had a theory that it originated with a kitchen table talk about how it was time to learn to do your own laundry. Calculate the potential inflated wear time of black versus white, and bingo -  black it is. Go ahead and tell me it was just fashionable;  it's so cute to see a young rationalization. Just darling, really. I know for a fact that funky teenager clothes will kill a Snuggle bear.

Hubzam will jump in on laundry duties, if he sees I'm bogged down too much - so kudos to him for that.  There's a bit of naggravation involved, however. He quickly turns it into a raging diatribe on what is wrong with my clothing purchases. Specifically, he questions why I would ever purchase anything that requires special washing, and by "special" he means plain old sorting that I've done bent-backed for forty years (assuming I am honest with myself about doing laundry at fifteen).

Of course, he may have developed this view after I burnt a hole in his forehead  with my laser wife eyes when he turned my beautiful red sweater from Saks of Boston into a slightly snug dog sweater. To his credit, he also created coordinating underwear in pink from the same load, so there's that.

Is this really the place to let sleeping dogs lie?  So, for the record, if you wash my black sweater with a white sweater, an amazing fuzz exchange occurs - rendering both unwearable. "Cookies and Cream" is not a sweater color.  If I wanted my clothes to look dirty, I wouldn't put them in the laundry.

A bit o' history:  when I met my Hubzam, he had a closet full of khakis and pale blue shirts. Assuming he had a "uniform," that made sense to me. Unfortunately, he didn't have a uniform.  He just refused to purchase any clothes that had to be sorted.  Engineers...pffft!

My approach to the thankless chore of laundry has evolved over time.
Keep it clean, peeps.