Express Yourself Scary Movies (or Books!)

While visiting author Stephanie Faris' most excellent blog, I became inspired to join in on the bloghop hosted by Dani and Jackie. Ladies, I give you the flipster salute for creativity (high praise).  It's not a bad thing; really it isn't.  Flipster salute just sounds like you might not want one.

The challenge of this bloghop was simple: Discuss the scariest movie or book you've read that made you unable to sleep.


I'm going to take you back a bit to early Stephen King. Salem's Lot was unknown to me and hot off the presses in the late seventies when my friend, Deborah, pointed it out on the magazine rack of Allen's Drugtown.


My mother trusted Deborah with my life (and the lives of my siblings...but really, let's focus on mine) when she was our childhood babysitter. That said, she babysat us a lot - like weekly. There's a judgement question that lingers in my mind...I mean, she seemed normal, yet she was our babysitter. Hmm.


Back to the story; Deborah had read the book Salem's Lot and loved it. She encouraged me to buy it. The original cover on the copy I purchased was black with a raised impression of a women who had a drop of blood dripping from one side of her mouth. Shiver...I'm in! 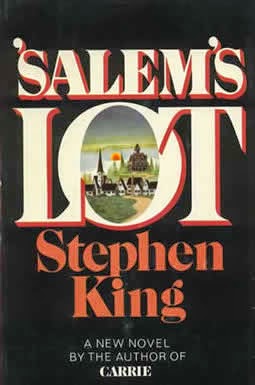 Nostalgia is flooding my brain as I think back on the excitement of getting a new book and having no job to interfere with free time. The perfect mix.

With scary novel in hand, I went home, had dinner, and started to read the book. The story opens in a small town on the California/Mexico border and gives the reader a tempting glimpse into the world of a man and a boy on the run. In no time, I found myself pulled into the chronicle of the main character, Ben Mears, as the author recounts the story of Ben's return to Jerusalem's Lot, the town of his childhood, in the state of Maine (all Stephen King novels seem to have ties to Maine) and all the resulting mayhem and horror.

Of course, every fictional trip home starts with a re-connection with lost love (FYI: that is why they call it lost...people don't actually break up because they can't find their date...that ship has sailed...no one listens). Susan Norton is the babe, in this tale.

The specter of a notorious local haunted house looms in his mind and Ben plans to write a book about it - the dreadful Marsten House is legendary in old 'Salem's Lot and scared the heebie geebies out of Ben when he was a child. Things haven't changed and they were about to get worse. Kurt Barlow (creepy Austrian) is on a mission to open a store and buy the Marsten house for his "boss" Richard Straker.  Maybe the word "master" would be more appropriate. Coincidentally, something is happening in town. A child ends up dead under mysterious circumstances... then another.

The whole town slowly becomes consumed by a bad case o' deathiness.   Deathiness is bad, man; there's no anitibiotic for it, no matter what health plan you're under. But these dead folks keep showing up after they're dead. How rude.

It's vampire time, peeps. Those jugular poppin' freakshows of the night are in 'Salem's Lot and they are multiplying like pesky wabbits. All subplots lead to the bloodsuckers.

Ben teams up with Mark Petrie;  just a kid, really, whose parents fall victim to the head vampire and his crony (not going to divulge all the details...I'm totally okay with Stephen King accumulating wealth).

This is King at his finest; in fact, he has indicated 'Salem's Lot was his personal favorite.

I'm reading this in my basement bedroom, long into the night. The vivid imagery the author created came to life in my own personal cranium in the form of creaking, weird night bird calls, strange shadows, howling dogs and distant voices. I found myself totally afraid to sleep. If those fanged foes were going to get me I wanted to be awake for the carnage, I suppose.

It occurred to me that there was no reason in the world for Youngstown, Ohio, to be excluded from the threat of vampires. In fact, King mentioned the team of Mears and Petrie traveling through Youngstown on the very first page.

This had to be some kind of code to warn us that those two dudes had passed through town, they had totally ticked off a slew of vampires and perhaps ya'll should wear crucifixes around your neck and make sure you also had crosses on your jammies. Vampires on the hunt have to eat and there were a whole lot of steelworkers who looked more than a little vampired.

Holy cow, that book was scary!  I read it straight through, and only got up for the resulting fear-diarrhea (also known as feararrhea, for the non-irritable bowel crowd) that accompanied it. It occurred to me that if I were a vampire, I would be more scared by that aroma than the garlic, but what do I know?  Feararrhea may have worked because I never did have a run in with actual vampires.  How many of you readers can say that? 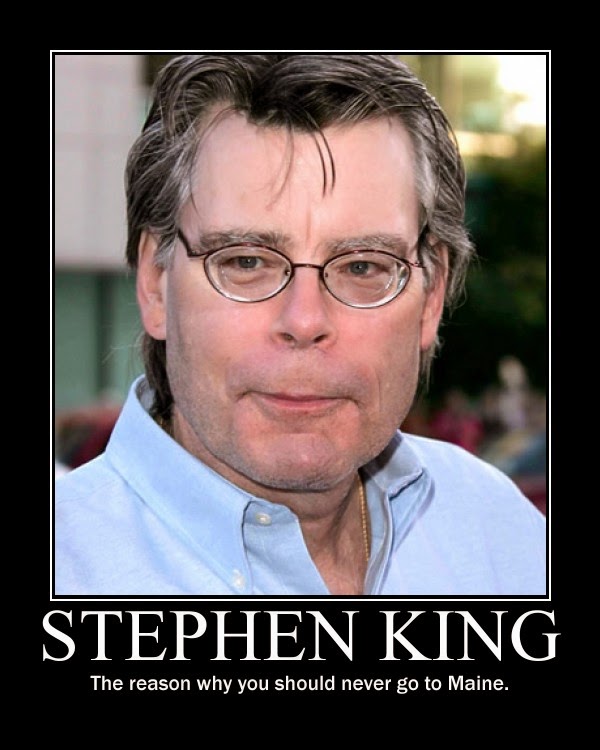 Why does Stephen King stay in Maine?

Don't get me started on King's other nail biter - It.  It ruined me for clowns and curbside sewers. 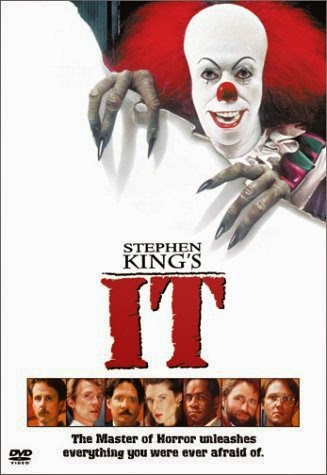 Here is the ultimate flattery:  I still have that book I bought in the late seventies. Granted, it is dogeared - especially in the middle, where I held it with my sweaty, white knuckled hands. 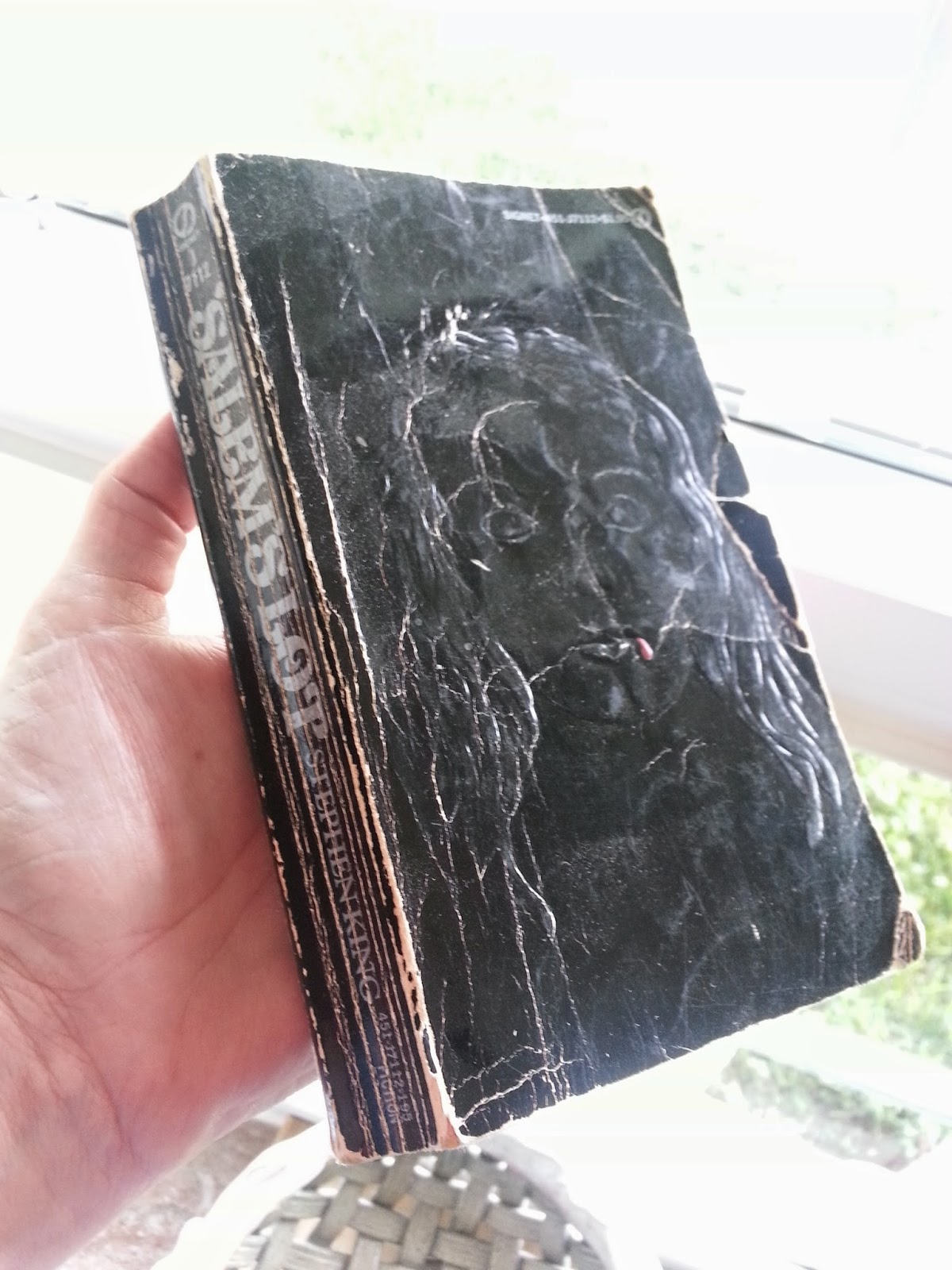 Gosh, I love a good read. Thanks, Deborah; I love you, too. I hope something knocks on your window tonight and you think of me. There is someone in the closet, by the way, and he has a balloon for you.