Why Everyone Needs a Husband (Snake!!!!!)

I've never been crazy about "cookie cutter" houses or subdivisions, but hey!  I'm middle class, baby. That is our biome.


I was thrilled when we found our current home in 2001 (you'd question my sanity, if you knew all the work we had to put in to it for it to be acceptable...but that's another story). It is at the edge of a subdivision, down a long driveway that definitely makes me feel separated from the subdivision. The house is very unique.  In the 70s, the developer of the subdivision saw an antique barn that was going to be torn down at the building site of a new plaza.  He relocated it and turned it into a private home with stone exterior and a crazy floor plan that could be improved upon if you just poured all your cash into it.  Did I say you?  Obviously, I meant me and Hubzam.

My home sits in a beautiful, pastoral setting surrounded by green fields.  At the back of the property, we have a creek at the edge of a wooded area that serves as a nice buffer between us and a busy rural highway.  It's so peaceful.

Over the years, this place has been home to many critters - some that I purchased and raised, some that were born here and some that just wandered in.  My friends started calling me "Mrs. Doolittle." Some of that is deserved, because I did have quit a few critters at one time.  As a matter of fact, I think I've had an unusual amount of wild animals appearing in my yard.

One morning, as I peeked out the window to see the what the fuss was at my blue bird house, I saw Ma and Pa bluebirds going nuts and diving at "something":  it was a black rat snake hanging on our fence and on his way to the base of the fence post which held the blue bird house.  Fledgling birdies were on the ground and I could see what was going to happen;  the snake saw a blue plate special.

As I watched, a groundhog walked up the sidewalk and sat on the porch and watched the action, too. Am I invisible? 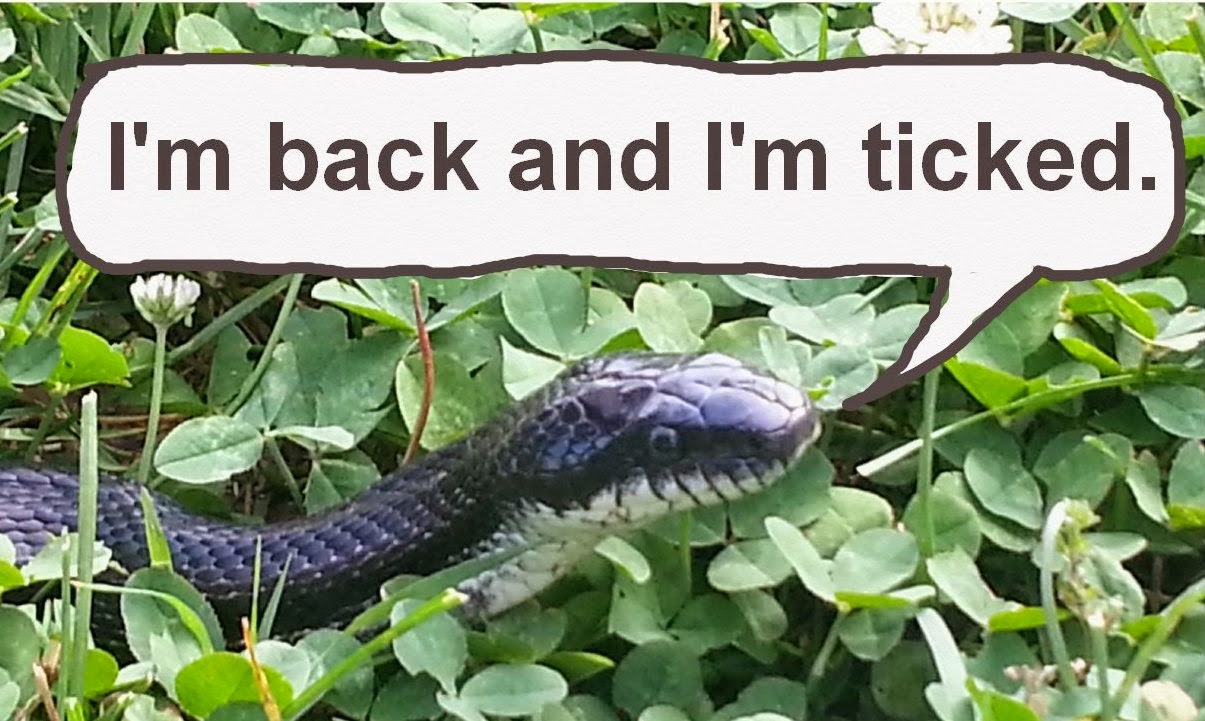 Though I don't like to mess with Mother Nature (remember the commercials?  She'll lightning-strike you over margarine!), I cannot help but save birdies.  And by "I", of course, I mean my Hubzam. Apparently, I have no problem with snakes going hungry, but I happen to know that mice love fields, snakes love field mice and the snake got relocated to the far corner of our property.  Slither away, dear, slither away! Putting two acres between you and a snake just feels right.

A few days ago, we had our yearly visit from a rat snake, or perhaps "the" rat snake.  The one we see gets bigger every year, and I tend to think it's the same one; until he wears distinctive jewelry, I'm sticking with that thought.  Hubzam was going out to the truck when he noticed it and called me out to see it.  If there is anything truly creepy in the yard, you want to make sure you see it because sometimes people run out of subject matter for their nightmares and well, that would just be sad.

The snake was now about five feet long, but this year - he was ticked off about something! Usually, we just pick him up and he hangs on the end of a stick till he reaches his new location.  Believe it or not, I have done this before;  I'm not nearly as wimpy as I claim.  But all that confidence melted away when this snake started striking at me and my snake re-locator broom.   Hey, you! You're not even poisonous! Still - it was a scary sight. Hubzam stepped in and the snake irritation heightened;  that scaly guy was determined to bite someone. Grabbing a small blanket, he tried to divert it's attention and I was amazed at the tenacity of this snake - he was going to bite something, darn it.   Finally, Hubzam grabbed a five gallon bucket, covered it and slipped a piece of cardboard underneath to trap the snake.  It was the best thing;  snake murder was on my mind.

Snakes are creepy, even if I am not a screaming, crying fool about such things.

However, HUSBANDS ARE THE BOMB!  If you don't have one, you don't know what you're missing.  If you have one, make sure you praise all snake interventions, because the darn snakes come back and you just might need a hero again.