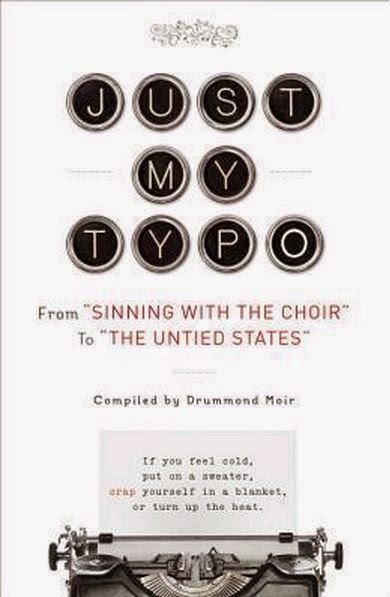 "If you feel cold, put on a sweater,
crap yourself in a blanket, or turn up the heat."

Be honest, could you really resist a book that has that on the cover?

Compiler Drummond Moir pulled me in from the minute I picked up Just My Typo: From "Sinning with the Choir" to "The Untied States".  What started as a quick trip to the mailbox turned into a prolonged state of just-one-more-page that interfered with everything that should have come after the mailbox trip! This book is absolutely hilarious and had me laughing so hard I was wheezing, the ultimate compliment from yours truly.


My son, Gonzo, desperately wanted to snatch this book from my greedy little hands, but he had to wait till I read it through. I'll probably read it again when he is finished. At just under two hundred pages, it is a quick read and worth it.

Just My Typo attacks the subject matter without apology. It's the bane of writers, editors and bloggers alike - the dreaded typo. Typos are seen in every form of printed media, and I'll bet there are even some misspelled hieroglyphics that archaeologists struggle to comprehend at this very moment. This topic needed the Moir touch, apparently, and he has done a great job at compiling a really enjoyable read.

Cleverly organized into categories with more than a touch of snark, Moir skillfully addresses all forms from the mildly amusing typo ("Germans are so small that there may be as many as one billion seven hundred million of them in a drop of water.") to the absolutely killer ("The man blew his brains out after bidding his wife goodbye with a shotgun.").

Two of my favorite chapter names were "Immaculate Contraption: kids typos" and "Life and Death: when typos kill." They delivered all that the names implied.

I would have loved to have been a fly on the wall when someone realized that a 1631 edition of the Bible contained the instruction, "Thou shalt commit adultery."

Drummond Moir grew up in Edinburgh and studied at St. Anne's College, Oxford, and Daiichi Keizai University in Fukuoka, Japan. Moir is currently based in London, UK, where he is the Editorial Director of Sceptre.

FTC Disclaimer: I received this book from Blogging for Books for this review.
Posted by Cherdo at 12:05 AM