MOCK! and The Armchair Squid are proud to introduce Mock Squid Soup: A Film Society.
Each month, on the second Friday, we shall host a bloghop devoted to a particular movie.
We invite others to watch the same film and post their own reviews. 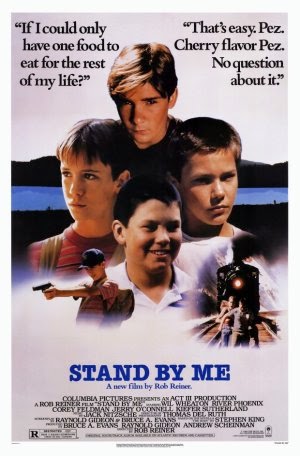 When I first saw this movie poster, a flood of fond memories hit me immediately!  Stand by Me is a classic by Cherdo standards.

Rob Reiner, my favorite meathead (and I've known a few), directed this 1986 film.  Though essentially a comedy, it had a dark side, and I'd definitely put it in the "coming of age" category of films. Based on the Stephen King story, The Body, it  follows the adventures of four small town boys who go off in search of a body of a missing boy. Doesn't that just sound like something a boy would want to do? Of course, it does.

Rather than retell the whole story, I'd like to address what is remarkable about this movie: the combination of a good script, well developed characters and a stellar cast.

The Body was one of King's better short stories, in my humble opinion, and I'm pleased that the script did it justice. As someone who loves books and movies, it is always a let down to see a sub-par adaptation. This was truly done well. If you were familiar with the story before seeing the movie, the connection between the two solidify. On subsequent readings of The Body, the actors who portrayed the characters in film inhabited the pages, too.

The story is told through the eyes of Gordie, now grown and reflecting on the childhood trek after hearing of the death of one of his old friends. The rest of the pack includes Chris, Teddy and Vern. Before long, the viewer is totally in touch with the personalities of the four boys. Chris is a bit of a n'er do well, if his family is any clue. Teddy has it rough, too; a scarred ear from an abusive act underlines that fact. Last, we have Vern: a little shy, and overweight, an easy target of ridicule.

Young Gordie Lachance was played by Will Wheaton. Most people would associate Wheaton with Star Trek or a recurring role on the Big Bang Theory as the nemesis of Sheldon Cooper (Jim Parsons). In reality, he has a huge body of film and television work. Wheaton made a perfect Gordie, the storyteller. He radiated a shyness and a little awkwardness, but you sensed he could rise above it. Gordie was the glue that held the group together. Pretty good for such a young actor.

River Phoenix played Chris Chambers. The public tends to remember the unfortunate end of Phoenix's life first and his body of work second.  He was an excellent actor. Something about River Phoenix always made me think he was cut from different cloth. There was a seriousness and intensity about his character portrayal and a bit of bad boy implied, which was basically my opinion of him in real life, too. The viewer wants to believe there is a wise soul lurking below the surface in Chris. We learn through the film that he was never the bad guy people assumed he'd be, and he would rise above adversity and become a lawyer. Chris was the friend who had passed away while attempting to break up a fight in a fast food restaurant.

Teddy Duchamp was played by Corey Feldman, who appeared in other classics of the 80s, such as Goonies, Gremlins, The Lost Boys and The Burbs. With his deformed ear and big dorky glasses, he rocked quirky; he was a bit of a wild card in the group. Every group has a Teddy, scarred or no.

Jerry O'Connell is the chubby cherry pez poppin' Vern Tessio. I always felt sorry for poor Vern, especially in light of his buddies who all seemed to have a better handle on things.

These four young actors really pulled it off, and the rest of the supporting cast weren't slackers, either. Note the big names like Richard Dreyfuss, John Cusack and Kiefer Sutherland, no less. 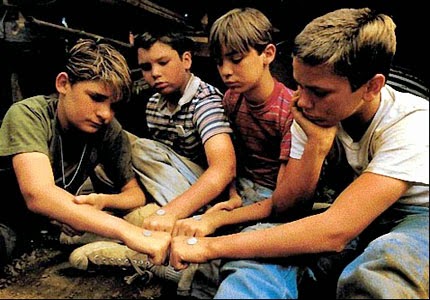 So, what did I take away from this film? For a movie full of children, it's really not a movie for children. It's a movie for the introspective realist. Life isn't fair or balanced. It's a lovely dose of nostalgia for childhood days, lost youth, friends who have passed and adventures shared.
________________

It's August 8th, and our society officially debuts today with Stand by Me.  First released to theaters, not coincidentally, on August 8, 1986.  We hope that you, too, will watch this classic movie and join in our discussion. Please sign on to the list below:
Posted by Cherdo at 12:29 AM