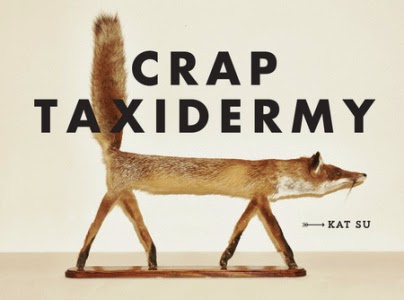 "To my Tiger Mom, Wendy Su.
See? I told you I'd publish a book one day.
Wait, this isn't what you had in mind? Dangit."

Kat Su's ode to the worst possible taxidermy in the world gets my vote as the best of the worst. Crap Taxidermy ventures where no man dare go: good taxidermy, bad taxidermy, and the extremes of what Su describes as "weird-as-hell" (excuse me). Actually, that pretty well sums it up.

In 2009, an empty apartment in Brooklyn, New York, sent author Kat Su in search of uplifting dead animal decor. The internet provided more than Su bargained for in the way of weird wall hangings, and the Crappy Taxidermy Tumblr site soon followed. Readers with a keen eye for the stuffed lunacy soon supplied photographs of their own crazed creations, and the foundations for Crap Taxidermy, the book, were in place.

Weird humor is much appreciated; the pictures creeped me out, however.

In ninety-six pages, Su pulls you along through all levels of taxidermic indecency and award winning feats - if the award is for absolutely insane efforts. The book is a pictorial guide to the amateur taxidermist, and thank goodness. You wouldn't believe most of the examples actually existed without a picture. The image of "the happiest cat in the world" and his bug eyed friends is funny, then disturbing, then funny...whoops, we're back to disturbing.

Plastic googly eyes adorn bears and mermouses (or should that be mermice?) hold court, uninhibited. Attempts at improving on nature fail with freakish flair. If your humor style could be described as "sick and somewhat twisted" - this may be the book for you.

The last chapter has a helpful How to Stuff Your Own Mouse guide, a step by step process for home taxidermy. I pray it's tongue-in-cheek.

I received this book free, from the Blogging for Books program, in exchange for my honest review. Then I hid it from public view, till the next weird teenager visits and I force him to take this book home with him.