A Nightmare on MY Street 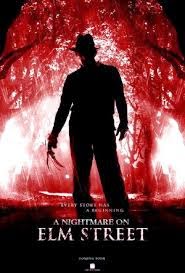 It's a week before Halloween, and I'm looking for good, scary movies to be rerun on the old boob tube. Sometimes it's fun to have a good scare...or a bad scare! Perhaps it is similar to the adrenaline rush some folks get with thrill seeking activities. All I know is that I have always been a fan of scary movies.

When I was young, I'm ashamed to admit that Barnabas Collins on Dark Shadows really held my attention. I look at those reruns now and I realize I must be mentally challenged, albeit undiagnosed. Maybe bright, shiny pieces of tin foil would have held my attention just as well. Nothing about Dark Shadows was scary except the quality of the screenplay. I take that back - the incredibly slow pacing of the show is frightening, too. Back then, commercials were an act of mercy.


As I became an adult (assuming you buy the fact that I did become an adult), I was disappointed in the lack of truly scary flicks. Gore and sadistic killing replaced a good plot. Lame! In my opinion, some of the best horror films wove the tale around things you never actually saw; the story contained elements the viewer could connect to and slowly - you were pulled. When that happens, you have the potential to be truly scared.

In 1984, Wes Craven's A Nightmare on Elm Street was released. I have to admit that the premise didn't sound all that enticing and so I didn't see it till a couple of years later.

When I finally did see it, I just happened to be visiting my Mom when it came on cable. While sitting in her living room with a house full of other guests, the television was on in the background and my mind wandered away from the conversation and I started to watch it when it came on. Very quickly, it was like everyone disappeared as I became engrossed in the story. It scared the jeepers out of me.

If you're unfamiliar with the story line, it involves a group of teens who are being stalked by the menacing knife-glove wearing Freddy Krueger. In their dreams, he taunts and torments them till it's all over, both in dreamland and in reality. Early in the film, the main character, Nancy, dreams about Krueger and awakes with slashes on her nightgown. Yow! Soon she figures out that her other friends are having the same frightening dream complete with the scarfaced Krueger and like the moronic screen teens of folklore, it doesn't occur to anyone not to go to sleep.

I was uber-empathetic, holding my breath, and grabbing the couch like no body's business while I obsessed over their fates. Afraid to go to the bathroom or down the dark hall, I sat there with the big eye. This movie was full-on creepy and scary. A disfigured razor gloved guy who stalks you in your sleep - and kills you! Run, kids, run! Uh, never mind, don't run! Drink a ridiculous amount of growth stunting, sleep depriving coffee! Do something or else you're doomed! Energy drinks, kids! Sleep in shifts!

One of the next victims is attacked in her dream as her horrified boyfriend watches. Invisible attackers slash at her and her body is pulled up the wall as she screams his name. Of course, he gets blamed and hauled to jail where Krueger gets to him, too.  Immediately, I knew that I was going to have a nightmare about that scene. And if I have a nightmare, and Freddy Krueger is in it, how can I be sure he won't do a number on me? Crimeny, this is gonna be bad.

Later in the film, Nancy's mother reveals that there really was a Freddy Krueger, a child murderer who got off the hook. Parents took matters into their own hands and burned him alive - and now he is out for revenge.

Looking around the living room, I remember thinking, "Why is no one else glued to the tube?"

You have to watch the movie for yourself. Truly, this was a scary flick that made me have my own nightmares for many nights, caused me to suspect something was in my walk-in closet (which I previously loved), made me think someone was looking in my bedroom windows and dang it, I may have peed a little during one of the scenes to avoid the dark walk to the bathroom. Would I lay another run-on sentence at your feet if it weren't absolutely necessary?

The nightmare was on my street now.

As bad as that sounds, I wish I could see more movies like that. Minus the pee part, of course.

What was the scariest movie you ever saw, peeps? Come on, 'fess up...it's almost Halloween!