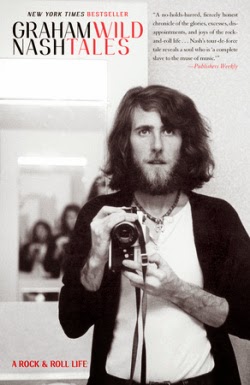 Graham Nash's Wild Tales is a biographical journey from his humble beginnings in Salford, England, to the heights of rock and roll. It is a tale only Graham Nash could tell and he does it with a staggering amount of detail about people, places and song.

Few bands exhibit the mastery of the craft of songwriting the way the Hollies or Crosby, Stills and Nash did. Nash's memories reveal the fascinating back stories from the vantage point of a member of that elite inner circle of talented artists and friends.  Each chapter reads like a who's who list of some of the greatest names in rock: Joni Mitchell, Gerry and the Pacemakers, Simon and Garfunkel, the Stones, and the Beatles, to name a few. It would be easier to say that anyone who made their mark on the music scene from the sixties to present day is likely part of one or more of Nash's anecdotes. With great attention to detail, he reveals the loves, losses, friends and foes, teetotalers and addicts.

In the words of Bob Seeger, "rock and roll never forgets."

The stories behind many of the iconic songs of Crosby, Stills, Nash (and sometimes, Young) interested me most, though I confess I was disappointed to find out that "Just a Song Before I Go" did not involve a sad loss of love and a last goodbye in an airport. Anyone who loves the music would enjoy hearing the inside scoop (no spoiler here).

The book is very much a Graham-centric tale that does not gloss over drug use, bad behavior and bitterness, but it is always told by way of Nash's own moral code, sensibilities and political views. At times, it was a bit too much confidence bordering on self-righteousness.

Looking at the present day Graham Nash revealed a dedicated family man enjoying the look back at his long, fruitful career. That's my favorite Graham of all.

[I received this book in exchange for an honest review from Blogging for Books.]