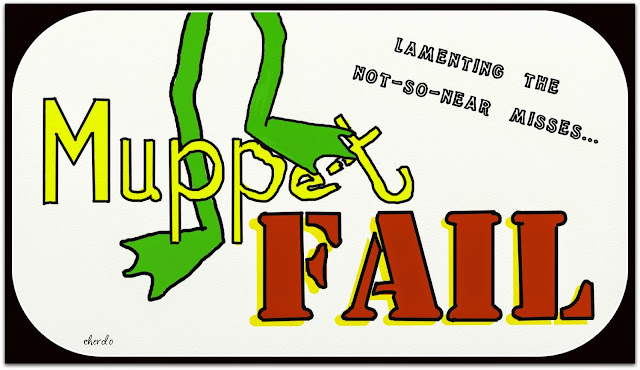 I saw a something on a sidebar that said "rejected muppets." The link failed to provide the twisted pleasure I expected, but it started me thinking about what a failed Muppet might look like. To be blunt, not everyone is a Kermit the Frog or Miss Piggy. It's the hard, sad truth - competition must be fierce. Are there long lines of puppets who want to take that next step and be muppets? It's surely a marionette mash-up, a virtual hand-all-up-in-there smack down.

Muppet Fails must be the lost souls of the Muppet World. I wondered: why would a Muppet Fail? Is there a prevailing puppet prejudice against hip, continental and ecologically aware felt creatures promoting education, or at least the first letter sounds?

Time for some investigative journalism... 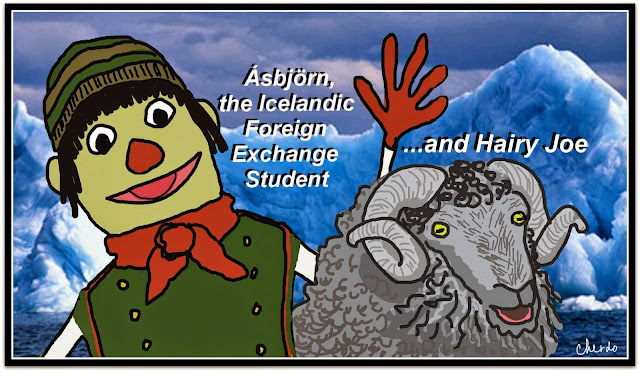 Ásbjörn the Icelandic Foreign Exchange Student seemed like a winner from the start. Obviously, the backstory was that this kid was a go-getter who valued education. As a foreign exchange student, he had committed to a challenging change of pace for a year as he studied alongside American students. Surely he had wonderful stories to share with the kids about his homeland.

With his pale, ethnically confusing pallor and jaunty Icelandic coat, you had to ask yourself: what's not to like? Even with the alarmingly realistic details about his lunch (sheep head, fermented shark, bread that's been buried near a hot spring to bake...and smells like sulphur), test audiences loved him. Observers imagined the smell of mackerel every time they observed his audition - he was that good.

So what went wrong? I'll tell you: Ásbjörn had a sidekick, Hairy Joe.

Hairy Joe never clicked with audiences. You either love  yellow demon eyes or you don't; it's a polarizing look. The twisted horns reminded people of...well, you know who. The look on his face never changed: yellow eyes, staring ahead, mouth gaping open...steam rising from his lips. Hairy Joe never met a comb. He had an odd smell, more like a real mountain goat that a felt covered prototype.

Ásbjörn tried to cover for him, but the constant awkward attempts were embarrassing and contrived.

"Hairy Joe is very pleased to meet you" or "Hairy Joe is so glad to be here in the greatest country in the world" proved useless. Come on...do you think the casting staff was björn yesterday?

Ásbjörn and Hairy had to go. They were MUPPET FAILS. 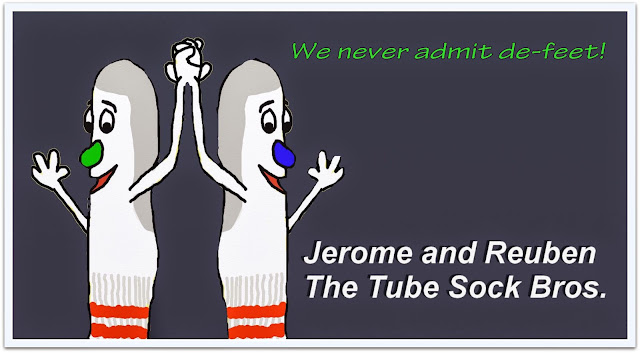 The next wave of potential muppets brought The Tube Sock Brothers, twins Jerome and Reuben. Their backstory was that they were boxers.

Everyone went nuts! Lawyers got involved. Apparently, you just don't tell people you are boxers unless you are underwear. It's confusing to impressionable youth and and the next thing you know, you have the lawsuits piling up. Kids and pre-teens start wearing socks for underwear while claiming they were misled and confused by Jerome and Reuben. It seems to me that when the kids were dressing they would be left with a pair of underwear that didn't have a job; perhaps that might even clue them in to the fact that the socks had another purpose.

In the cut-throat muppetry world, the sharks smelled blood. Ugly comments were directed at Jerome and Reuben daily:

"Why DON'T you admit de-feet? Isn't that what de socks are for?"

"Oh, for crying out loud, it's just a pair of tube socks!"

"Sock it to him and put him out of his misery - he'll never be a muppet."

Prophetic words; they never were. Another case of MUPPET FAILS.