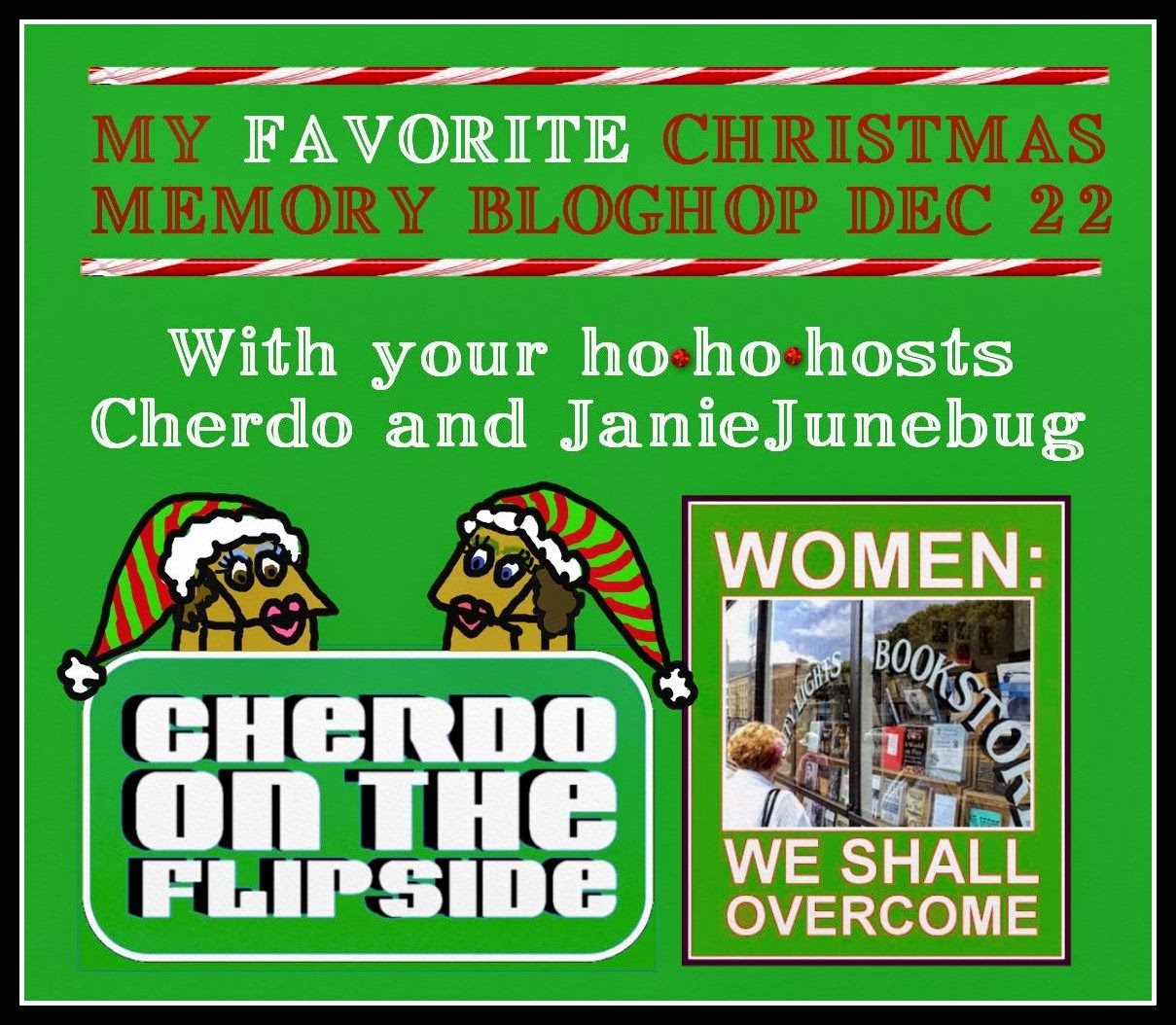 Janie Junebug and I (Cherdo!) would love to hear your own Christmas memories - it's not too late to sign up!  To join us, sign up below and then post your personal favorite recollection on December 22. Share the Christmas memory that has stuck with you through the years, and a little bit about what made it so special for you.

Was it happy, funny, sad, enlightening, or just plan weird?  Who am I to judge? It's your memory!

Ring the bells, write to Santa, put up the tree and wrap the presents early!  Our first bloghop won't be the same without our buddies - and we'd like you to invite as many of your own blog friends as you can! We want to blanket blogdom with holiday recollections, reflections and retrospection.

Christmases of my youth usually involved a trip to my great grandmother's house; we called her Nanny.

Am I crazy or have I become one of those old geezers who always goes on and on about how it was colder or snowed much more when they were young, because that it how I feel when I tell you it is true! I had the fear of snow getting in the way of the holiday trip but we left on time and I felt giddy all the way. That's saying a lot. Most trips for me involved unforgiving car sickness, but not this time. That, in and of itself, was a miracle.

As we drove down the long and twisting country road, my nose was pressed against the cold car window anticipating the first glance of "the farm" as we rounded the last turn. Snow covered the hills surrounding the cinderblock house and the meadow had a white blanket of powder without a single footprint. That would change soon, if I had anything to do with it.

Nanny greeted us at the door and announced our arrival to everyone. She was always so excited to see us and you immediately felt her love surround us. No hidden emotions for Nanny.

The kitchen table was covered with everyone's favorite cakes and pies. If you ever voiced a preference, she remembered it. Actually, my Dad made the mistake of telling her he loved her lemon cake and she made him his own cake year after year. He confessed to my mother that he was "just being nice" when he complimented her baking skills. Bad move on his part.

Soon, all the other relatives arrived. We chuckled at Nanny's Christmas tree, as usual - it resembled a Charlie Brown Christmas tree. It was odd shaped - always. Usually, it was a little sparse because those trees were easy to chop and carry down the hill. I'll remind you, this was my great grandmother, but she knew how to swing an ax, apparently.

As Nanny busied herself in the kitchen, I joined her. My uncle, Roy, came in to get a drink and chat. Out of the blue, Nanny smiled widely and commented, "Roy, did I tell you that Cheryl is the family historian?" (Cheryl is my actual first name.)

On this Christmas, she had dubbed a thirteen year old me "the family historian" and made it known that I was the keeper of the stories about the collective "us." In typical grandma-style, she gave me an affectionate nudge and added, "She writes pretty, too."

That makes me laugh, even now. I guess good handwriting is the cherry on top.

For all my childhood, I would ask Nanny to tell me about every relative she could remember and she would give me names and personal anecdotes. Fascinating stories came forth when pressed for details: like her grandmother seeing Indians in her field, and how they asked for food. Nanny told me that her grandma said they looked poorly and she shared biscuits and leftover ham with them as they told her, "Missus, we will never do you harm...we're just so hungry."

As she told these stories, you could tell that she was transported back by the memories and I was absolutely hanging on every word. We both were mentally there, standing outside of the log cabin of her grandma and watching the tale unfold. I loved those stories! And so, when I was about twelve, I started writing them down and that thrilled her. Later, I learned how to do pedigree charts and I would fill in everything I could remember and make extra pages of notes about each tidbit of information she shared.

Something about those few moments in the kitchen with Nanny is burned in my brain for all time. I didn't realize it then, but she was giving me a gift at that very moment. By assigning me the family historian role, other relatives would begin to tell me stories and I'd get to interview them and write it in on my chart. Most of the time, I wouldn't even have to ask; you could sort of tell that they were reminiscing with a purpose. Their story needed added to my collection.

As the years rolled by, I'd get bits and pieces of shared memorabilia, too - wonderful things. Some of the items I was given seemed like they should have been given to the relatives' children rather than me. A beloved great aunt sent me a picture of her deceased husband from the forties; there he was in his military uniform looking so young and handsome. A crease ran down the middle and she explained that he gave it to her before he went to Europe in World War II and she promised to always carry it till he came back to her - and she did. She folded it to make it fit in a little pocket in her purse.

"This is too personal; surely you want to hold on to this," I told my aunt.

"But you're the one who loves the family's history; so you should have it," my aunt stressed. Smiling, my great aunt began a story about her childhood home and added that Nanny had told her that I needed to know about her side of the family, since she had "married in."

My great grandmother died in 1984, but every time I get a letter with family stories or pictures, I think about her once again and the gift she gave me that Christmas: it was her faith in me to carry our family stories with me until I can pass them on to another family historian - maybe one that isn't even born yet.

My favorite memory as an adult occurred after Hubzam and I married.

We had purchased a ranch style house in a nice neighborhood and all the kids still lived at home. Juggernaut and Magoo were in school and Gonzo was about four. It was a Christmas when we had decided to stay home and I was so grateful! School activities, shopping, fighting the crowds, bathing the dogs, wrapping gifts secretly, getting the food for Christmas dinner - I was tired.

In my humble opinion, my living room looked especially fine that year with my teal and rose Queen Anne furniture and our decorated fireplace mantle. I'd never had a fireplace before - or a room full of matching furniture, for that matter. The Christmas tree sat in front of our bay window and it just looked perfect to me.

Juggernaut craved all things musical and had become a bit of a guitar whiz, so his gifts followed that path. Magoo was crazy about handheld electronics and had gotten the latest gizmo. Gonzo got a child sized vacuum cleaner - of all things! He had seen one at a friends house and thought that was the coolest thing in the world. The vacuum cleaner was the first gift he opened and he had to be coerced into opening anything else, as he explained he already had the gift he wanted (did he think he had to choose one from the bunch?). Hubzam sat in a fireside chair with a new book and our dog, Cleo, and our cat, Stumpy, on his lap. Our second dog, Ginger, lay at his feet.

As I entered the room to call them to dinner, the family scene of peaceful contentment touched my heart.

I was born in West Virginia and most of my family lived there. School years were spent in Ohio, but we always went back to "the hills" for holidays and frequent visits. In 1990, I moved south, but I still felt like home was Ohio or West Virginia.

Isn't it weird how adults hang on to that feeling? Are we mentally hot-wired to cling to our original homeplace?

At that moment, looking at my family as they enjoyed our home and our Christmas together, I fully felt our place on a new branch of the family tree. I felt the roots that had anchored us. And through thick and thin, even when I wanted to saw away at the branch as I sat on it, I still remember that this family is the center of the mark now - all things in our life ripple outward from it. A switch was flipped on in my brain and the light came on: this is home.

(This Christmas memory is all because of Hubzam; my best friend, the rock, the most loyal and loving of men. But that will have to wait till Valentine's Day...stick with the theme...)