A somber anniversary occurred yesterday, I didn't remember the date, but the event is forever with me - and all Americans. Social media sites were abuzz with memorial posts and a question: where were you? Much like the assassinations of John F. Kennedy, Bobby Kennedy or Dr. King , the Challenger tragedy unites us in sorrow and loss.

It's not hard for me to remember the details of that day. Working on a nursing unit, I had just parked the medicine cart after making the 11:00 a.m. rounds. A lounge for patients was located across from the station and we'd take patients who needed help with feeding there. That way, we had everyone together and there was less chance that a meal would be cold or a patient might be rushed.

The television sat high in the corner of the room and the newscast was on. All eyes were on the Challenger as we awaited lift off. The cameras panned the crowd and identified some of the attendees. Christa McAuliffe's parents looked on excitedly; her students were nearby. Christa was a teacher from Concord, New Hampshire - not an astronaut. Or perhaps I should say she wasn't before she was chosen for this flight. She was upbeat and inspiring; the media loved her. I remember thinking that her mom probably dressed up - she was wearing a light colored coat with a fur collar and her excitement showed. Her dad wore a newsboy cap, I believe. Funny how you remember details.

In addition to Christa, the crew included Commander Dick Scobee, Pilot Michael J. Smith, Mission Specialists (and Akron's own!) Judith A. Reznik, Ronald E. McNair, and Ellison S. Onizuka. Payload specialist Gregory B. Jarvis completed the crew. The knowledge base and training contained in that ship was impressive; these were pilots, scientists, researchers...the best of the best and one lucky teacher that seemed well suited for the role of astro-hitchhiker.

Finally, the Challenger fired up her engines and we had a lift off. My eyes were on the rocket and trails of white vapor, but I held my breath from sheer excitement. As I fed the patients on either side of me, I gave them a play by play of what was happening. They were elderly and some had difficulty grasping the concept that we were watching a live event. The other nurse working with me, Sandy, kept saying, "Just look at that, sis. Oh, that makes me proud to be an American." Sandy called everyone "sis."

And then, it happened. All our hopes and daydreams exploded in the sky.

Sandy whispered, "What just happened, sis? What is going on?" In our gut, we knew exactly what was going on. I froze and kept watching the screen waiting for someone from NASA to break in and say there was nothing to worry about; all that smoke was normal. But that never happened.

Oh, no. They can't make it. Their poor families; their children. This can't be happening. We're helpless; there is nothing we can do.

A little, tiny lady named Mildred grabbed my hand and in a tiny, weak voice said "Hey, I want to eat that." She smiled and pointed to the spoon of food in my hand. That bit of normal snapped me back into reality. Sandy began to cry.

On the television screen, the camera watched the parents of Christa McAuliffe once again. Watching her mother's face, you could tell that she knew that the worst possible outcome of this journey had just happened; her father seemed to be grappling with it. Maybe he, like us, was still in the what-just-is-going-on phase. Her students were all looking skyward but you could tell that the loss didn't register with them at all. In the background, the voices became more animated; the moan of raw grief began and you could hear crying family members.

Standing there, it seemed like everything should stop, but the activity of patients carried on as if nothing had happened. Everyone in the room with Sandy and I was confused to some degree or another; that was a sweet mercy for them.

I'll never forget where I was or what I was doing. I can even tell you what food was on the spoon as I fed Mildred. 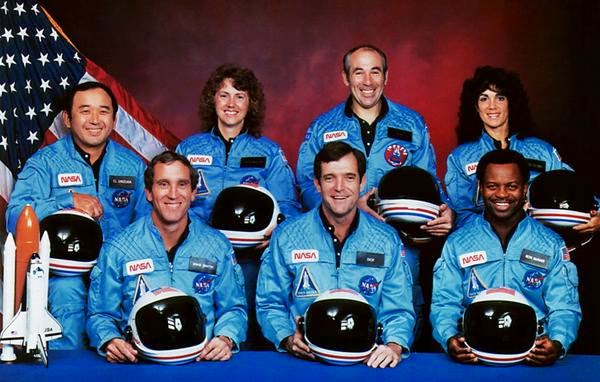 Just look at the picture of the crew one more time. Look at their faces; so happy and excited for the adventure that lay ahead.

How could anyone forget them?