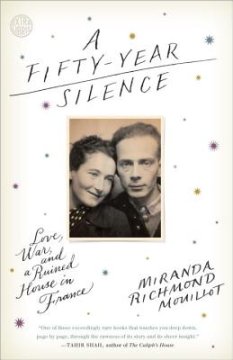 Miranda Richmond Mouillot has taken a family mystery and turned it into a compelling non-fiction tale. A Fifty-Year Silence follows the author's research into the question of her grandparent's relationship and their baffling separation. Part memoir, part autobiography, the story weaves itself between the war-torn European landscape her grandparents called home and her present day search to find her a place to plant her own roots.

Grandmother Anna was a physician who found herself caught in the maelstrom of Nazi-occupied France but somehow managed to maintain her resourcefulness and hope in the face of loss. Husband Armand miraculously survived, albeit more scarred and burdened. War consumed many of his family members in the horror of a "final solution" and his own life followed a twisted path that led to the Nuremberg Trials, where he would act as a translator.

In the aftermath of the war, the life and love that Anna and Armand knew disappeared and was not spoken of for the next fifty years when their granddaughter, Miranda, took on the task. Returning to their abandoned house in the French countryside, she steps into the past and becomes ever more entrenched in her search for answers. Piece by piece, she slowly extricates bits of information from each grandparent and tries to assemble a story that makes sense of their history.

A Fifty-Year Silence is well-written discourse, full of longing and heartbreak that is all too real. Mouillot's skill as a writer and researcher is impressive. Clearly, she was divinely equipped with the persistence and determination necessary to honor her family's past by telling their heartbreaking story with love.

[I received this book free, from the Blogging for Books program, in exchange for my honest review.]