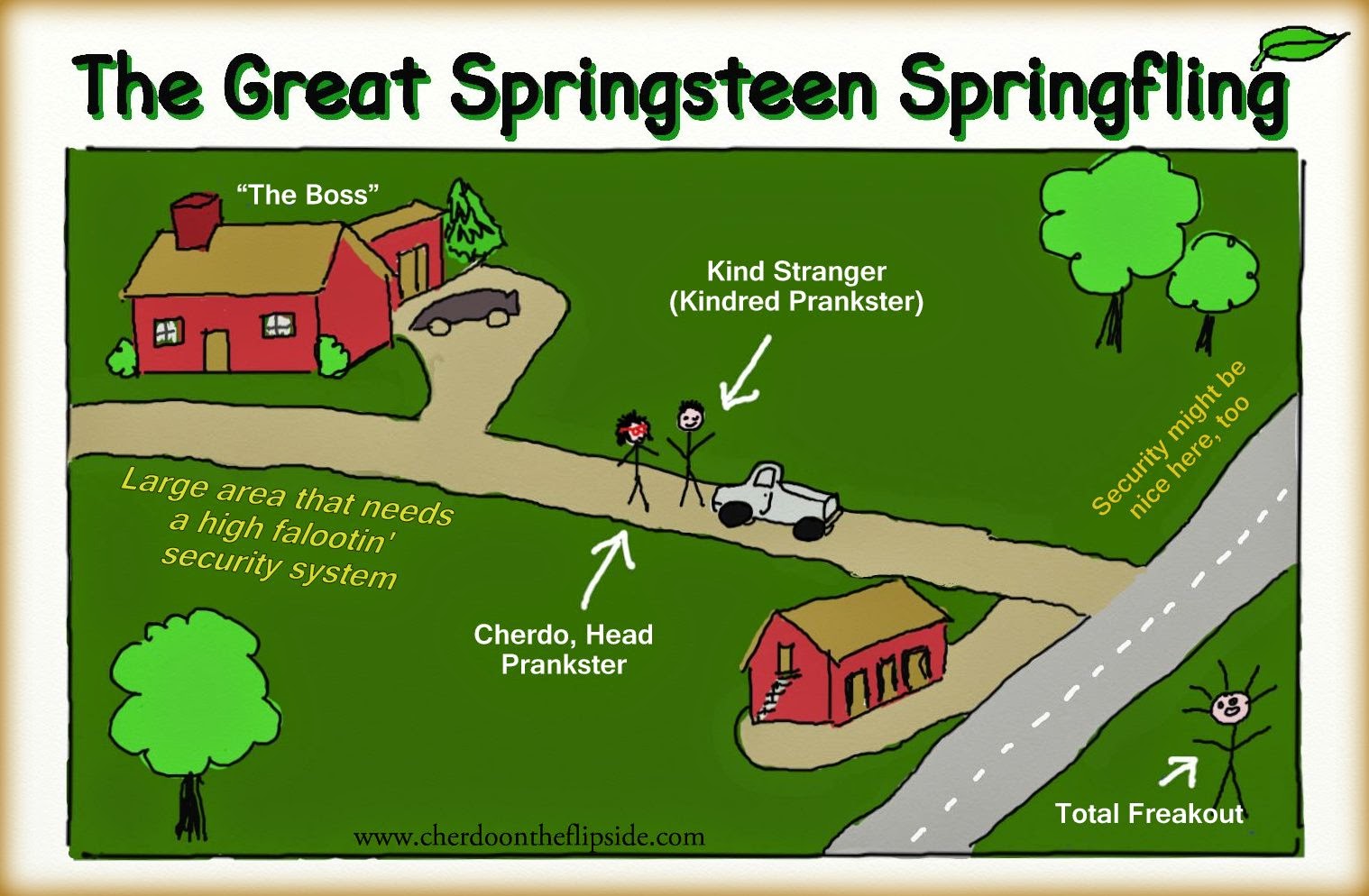 This post is in response to requests from my friends to tell "the Springsteen story." It's a tale that is too crazy not to be 100% true. The names are changed to protect the totally guilty and after I thought about it, I realized I couldn't use my real pictures. More about that later.

In the late 80s, I hung around with a friend I'll call Sally, mainly because that isn't her name at all. Her husband was a huge fan of Bruce Springsteen. Actually, he wasn't any larger than any other Springsteen fans, so huge may not be the right term. The man was obsessed with "The Boss". His dog was named Clarence Clemons, after Springsteen's sax man. Sally and I worked together and visited on weekends, so I was well aware of his fan-dom and the fact that he was generally hilarious.

MTV was running some sort of Springsteen marathon that included daily interviews and videos of his recent song releases. The Tunnel of Love album had just came out and I'm sure this series helped album sales along. Sally's hubby and I watched all the Springsteen interviews. I'm pretty observant; somewhere along the way, I remarked, "Hmmm...if you watch all these interviews, you could drive to his house. How weird; you'd think they would be more careful."

"Naw, you'd never get close to it," Sally's husband responded.

Never? Au contraire mon ami. Never is an awfully long time. Challenge accepted. Now to find a good time to pull it off (I was in Ohio).

Because I've always been about 50% geek, I lusted after the traveling exhibition of the Dutch Masters that was at the Philadelphia Museum of Art. The Dutch Masters, people. Together, Sally and I had planned a trip to Philly and Atlantic City; the unspoken challenge of finding Bruce Springsteen's house was too great. The starting clue was that he lived in Rumson, New Jersey;  just a hop, skip and a jump from Philly.

Let me just say that as much as I love Bruce Springsteen, I'm not normally this kind of "fan" nut. I am, however, the person who would do anything for a laugh or a dare. Sally started the journey thinking I was basically full of beans; there's no way I had enough information from the broadcasts to locate the Springsteen house.

This is where the Flipside gets cautious. I'm not a twenty something now; and I've seen real nuts in my lifetime. I, on the other hand, am harmless. My story clues are going to be intentionally vague; I don't want someone to repeat this little escapade for reasons other than my personal goal of smarty pants redemption and acquisition of  the combination laugh/great story.

Arriving in Rumson, I told Sally that the Boss had said he did a fundraiser for a local business. In a later episode in the series, he mentioned that his house was across the street from it. The phone book didn't list the business. The thought occurred to me that it might be "game over" already. Sitting at the traffic light, Sally lamented the fact that I was basically dead in the water. Just then, a bicyclist pulled up and stopped next to the car. I rolled down the window and asked him the location of the business. We were two blocks from it. Bingo.

Driving past the property, we were totally excited by the presence of a car that The Boss had mentioned in interviews - it was parked in the back of the house. Suddenly, it hit me that we were really looking at the Boss' house. Another thing Springsteen had mentioned was the fact that he had a recording studio above a garage at the Jersey residence. Separate from the house was a large garage; it was actually very close to the road. Anyone could easily see that it had an upstairs - potentially, a recording studio.

"I'm going to look in the window of the garage, " I informed Sally.

She started to freak-out a bit. The thing about Sally's freak-outs was that they were so funny. She'd get nervous, and fidget; her voice would go up in volume and her eyes doubled in size. Occasionally, she might let out a mini-scream. I was going for the full blown freak-out and anything I could do to bring it on...let's just say I was willing. At this point, I wanted a great story, too. I got out of the car and started to walk toward the garage, camera in hand.

In my mind, I thought that there was a good chance someone would say, "hey, private property!" There was an equally good chance that it would be a police man - but hey, then I'd have the ticket as proof!

This story just gets better and better. Looking in the window, I saw the car from the front cover of the Tunnel of Love album. I was practically giddy at the thought. Sally was at 75% freak-out capacity; but she had the presence of mind to ask me to take her camera with me, too (that still cracks me up)! I think I actually told her she could have copies of my pictures, assuming it wasn't in the evidence lock up at the local police station.

The house lay ahead, far from the road. I had to walk down the long, lonely driveway to the house now: I'd kick myself forever if I didn't try. I'll knock on the door politely, I thought.

A little voice in my brain wondered what it might be like to be tasered; somehow, I knew it would be bad but I was a gal on a mission.

I kept looking back at my friend to gauge her excitement. Sally was at 93% freak-out capacity and unable to sit still. She alternately encouraged me and whisper-shouted, "NO...Come back!!"

Just then, a silver pickup pulled up behind me and stopped. He got out of the truck. Politely, the gentleman asked if he could help me.

"Is this Bruce Springsteen's house?" I asked. You know, the kind of thing any run of the mill stranger would ask another stranger.

The man explained that Bruce really wasn't home; he had seen him leave a few days earlier. He looked like a security guard, but he was actually a gardener/landscaper. I have nothing to lose at this point and so I shared my plan to knock on the door and we laughed together at the audacity of the plan. He told me that the maid didn't ever answer the door - she just called the police.

Sally is in 98% freak-out mode; she had no idea who the guy was or what he was saying to me. The realization of that fact got my creative juices flowing and I was really appreciating the kindest of this gardener. There would be no Springsteen contact today, but all was not lost as I enlisted him on the next phase of the new plan - the Sally-prank. He was totally game.

"Pretend you're arresting me and putting handcuffs on me," I whispered (Sally had no idea who this guy was and couldn't have heard any of our conversation from her safe spot at the main road). We both began to laugh and struggled to keep it in, which just makes it worse, as anyone knows. Our faces were turned away from the now fully flipped-out Sally; it would have been obvious that we were in hysterics.

Sally couldn't see the details of what was going on, but I leaned over the hood of the truck and he pretended he was 'cuffing me. After a slow count of three, we turned and looked at Sally and enthusiastically gave her a thumbs up. Seriously, I think a part of her brain melted as she tried to figure out what just happened.

It was a date that will live in infamy and we had pictures.

After scanning ten or so pictures to add to the blog tonight, I became worried that he might still live there. I exclude them due to my flipside tendency for caution.

A few month's later, we were in town again and we drove by his house. A security system had been installed and signs dotted the yard. Wonder why?

A pizza guy chatted me up and told me where John Landau, John Bon Jovi and Julian Lennon lived. I resisted.

[I met Hubzam at Sally's house...the rest is history. Now he's the Boss.]