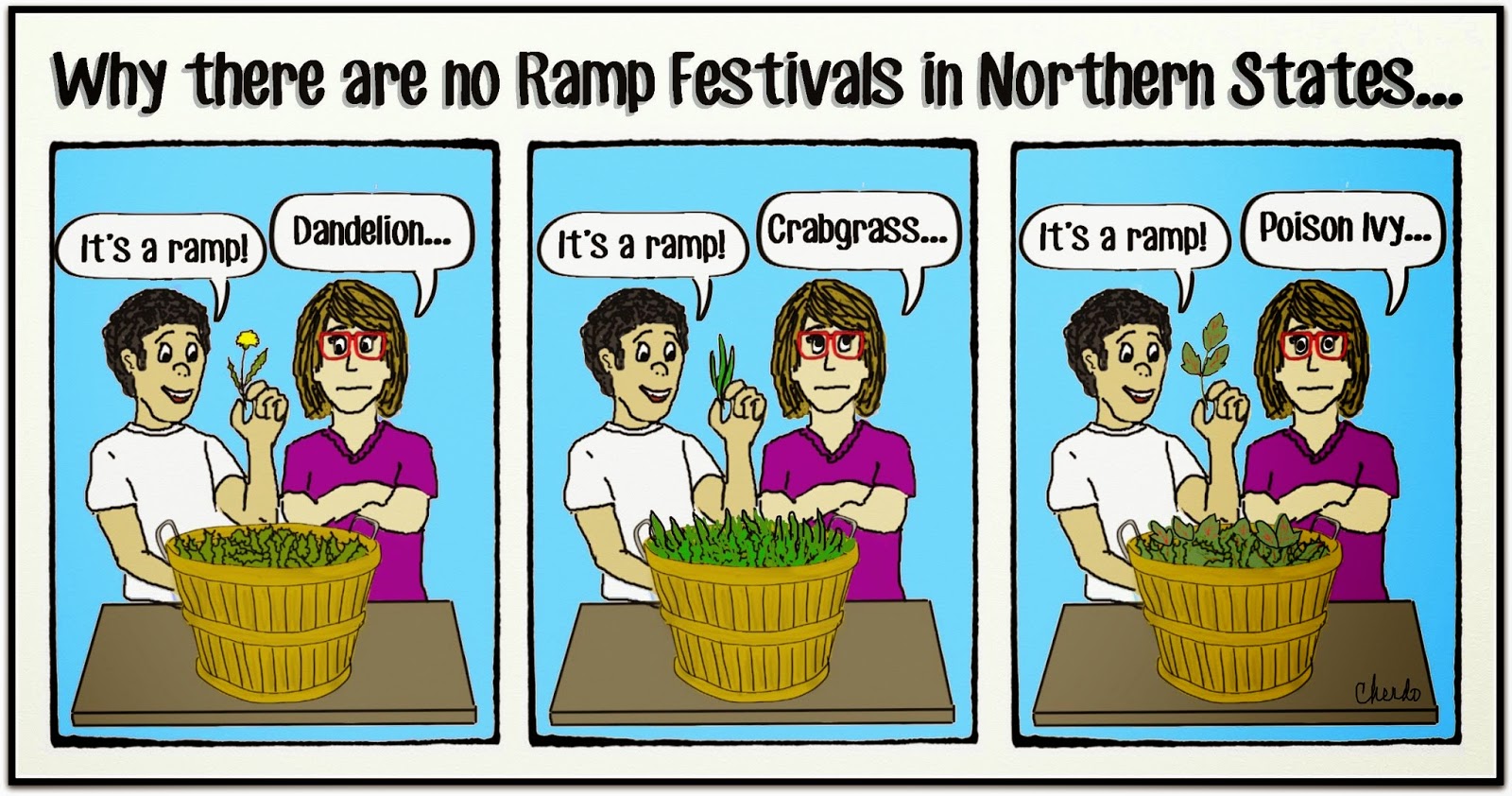 Yesterday, a friend posted a picture of a delicious looking meal he had made that included grilled lamb loin chops, a spring salad of asparagus, ramps, peas and snap peas with poached egg and lemon zest vinaigrette. Needless to say, they're eating well at his house; the man is a virtual gourmet. Note that I'm not saying what Gonzo and I ate last night. Hubzam is on a business trip and we get pretty basic while he is gone.

One thing jumped out at me: the word RAMPS. Ramps and I have a sordid past.

If you're not familiar with ramps (Allium tricoccum), they are a wild leek that grows in higher elevations of eastern North America. Let's be more specific: Appalachia loves ramps and the proof can be found in their Ramp Festivals. I happen to have been born within the parameters of Appalachia and frequently returned when my relatives were mainly above ground. My first mother-in-law, Mary Beatrice, lived smack dab in the middle of ramp country in southern West Virginia and it was there that I experienced my first ramp festival.

In the beginning, I was intrigued. I knew about ramps, but they were never a big thing in our neck of Appalachia...we were more "Ohio Valley" West Virginians. My grandmother had pointed them out and I'd picked some, but never really ate them. They smelled great - like a garlicy onion. So when I heard about this festival, I was kind of excited at the prospect. I could imagine all these wonderful ramp experts dusting off their best recipes and showing off their country culinary skills.

When the day of the festival arrived, the whole county smelled like ramps and I'm not even joking. I also learned that every church in town had their own version of the ramp festival going on. Wow, I thought, this is going to be great. I'll bet they're all doing something a little different. How interesting!

On the drive to my mother-in-law's church, she told me about the bushels of ramps that all the men of the church had collected and described the outdoor set-up for cooking. Casually, I asked her what kind of dishes they made?

"Mainly eggs and ramps, " she replied.

"No, just scrambled eggs and ramps."

No variety? Okay, I can accept that. But scrambled eggs? Really?  That didn't sound appetizing at all.

In spite of the initial impression, I tried them.

There should have been a bar chart of "ramp appeal": first bite, 95% appealing. Second bite, not as much: 85% appealing. By the third and fourth bite, we were in the thirty percentiles, at best. Never has an opinion gone down hill so quickly. I started eyeing the cook and the garbage can, my eyes darting between the two. I didn't want to hurt his feelings, but the can and the plate were about to meet. As soon as he turned his back, I dunked that thing like Meadowlark Lemon. Darn if that didn't raise a ramp stink. Everyone move slowly! The less air movement, the better. Trust me!

In the spirit of community, we visited some other church festivals whose sole offering was - you guessed it - scrambled eggs and ramps. My stomach was crying foul and I wondered if I had terminal car sickness from the twisting and turning road or possible ramp-n-egg poisoning, a deadly but misunderstood disorder.

For the next week, my mother-in-law brought home leftover ramps. I passed.

Which brings me to another point I want to make about one of the great things about living in the North. Southern friends would debate whether or not there is anything better (stop it! I'm right here, for crying out loud!) but I can tell you with road-tested certainty that once you get north of the Mason-Dixon, most people are ramp-ignorant. They couldn't identify a ramp if you paid them. For the record, I'm not paying them. EVER.

One of my Euell-Gibbons-wannabe (linked, just in case that name is not familiar) friends was fascinated by the idea of ramps and constantly brought wild plants to me and asked if they were ramps. He never got it right and his efforts created a running joke amongst my friends. We'd pick up anything and ask out loud, to no one in particular, "Is this a ramp? Can anyone confirm whether or not this is a ramp?"

My first mother-in-law has passed away now; she was an angel. If I was smart, though, I'd have divorced my first husband over the family's ramp affinity - but no! I hung around till he really gave me great reasons to leave him.

NEWS!! NEW!! NEWS!!
The Bonehead Blog Hop date has been changed to May 5th! Click on the link (over there...you see it...on the right) and join me for a heart felt confession of your favorite bonehead memory, whether new or old. Come on, you can do it! Thanks, peeps! 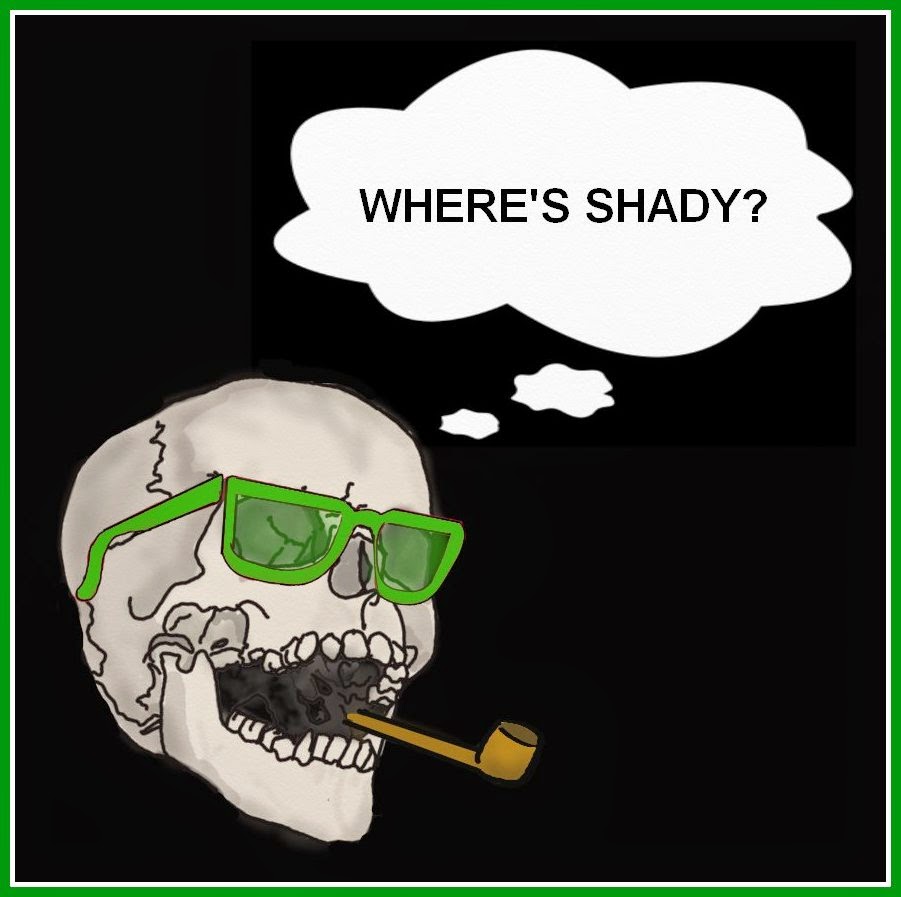 Better Late Than Never:
My A-t0-Z Blog Challenge theme comes a day late - I just signed up!
My theme is musicians!