C is for Cat 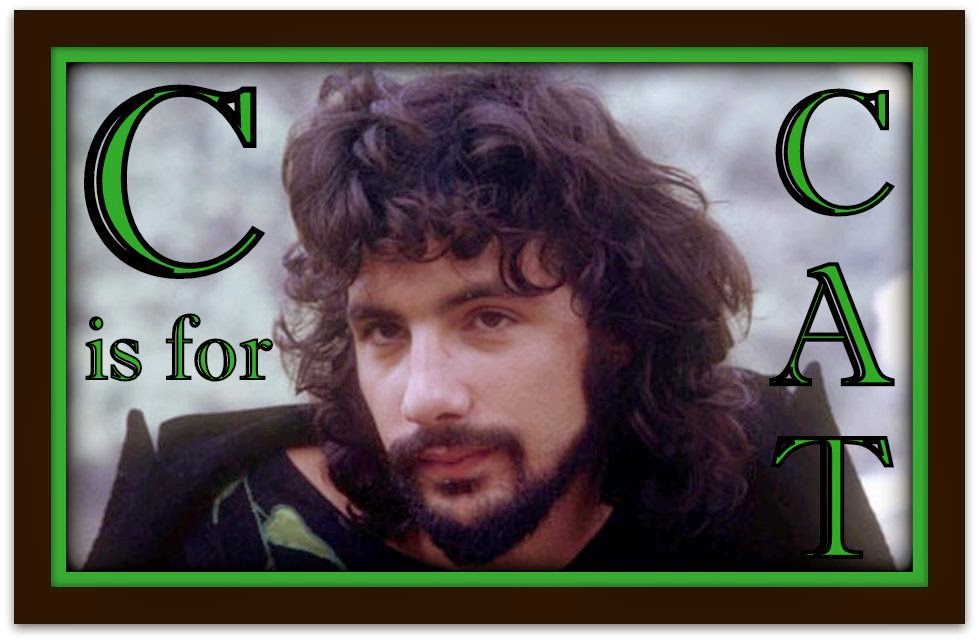 In 1948, Steven Georgiou was born in London. He showed an early interest in music, making an attempt to teach himself piano. At age 15, he picked up the guitar and later took a stab at art and cartooning. Personally, I'm glad that he decided to focus on the music because Master Georgiou was destined to become Cat Stevens.
His first hit was I Love My Dog and we all know there's nothing wrong with that sentiment.

Where do I start? There are so many Cat Stevens' songs that I love. One of his early hits was The First Cut is the Deepest. Every time I hear an artist cover that tune, I marvel at the lyrics and the depth of emotion those words convey.  Lines like:

I would have given you all of my heart
But there's someone who's torn it apart
And she's takin' almost all that I've got
But if you want, I'll try to love again

Peace Train, Two Fine People and Father & Son got heavy play on my old cassette player. Hardheaded Woman and Moonshadow - we can't forget those ones! As a matter of fact,  Morning Has Broken was played at my father's funeral. Cat gets around.

As an older fan, I developed a habit of looking up biographies of musicians. Maybe it's some tangible maturity on my part.

Cat Stevens had several turning points in his life: a deadly diagnosis of tuberculosis that kept him hospitalized for months made him reflect on his life. He always seemed to be looking for something, even when it looked like he had it all. His intense spiritual pursuits were said to have begun after a near drowning in Malibu, California. Fearing for his life, he cried out to God: "If you save me, I will work for you!"

For a period of time, he abandoned his music but reappeared last year for his Tell 'Em I'm Gone Tour and in December 2014, he performed live for an American audience. It was the first time since the seventies.

It's difficult to tell his story in 100-300 words (which happens to be my target size for the A-to-Z). Plenty happened between stardom, conversion, and reappearance; a little controversy, love & loss, a bit of touchy diplomacy. But this is about the music that touched me and my appreciation for the musician. After all, we all know that it's a wild world...

Here's Cat/Yusuf's induction into the Rock and Roll Hall of Fame:

Make sure to visit some of these great bloggers who are participating in the challenge!
Click on the banner link above - I'll see you tomorrow!