W is for Warren 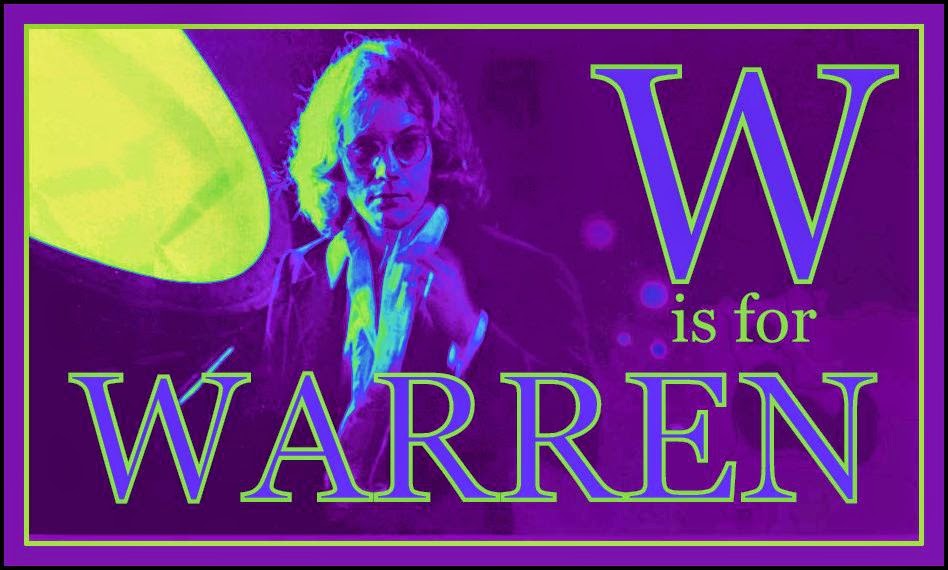 Cynics and snarkazoids unite in praise of the great Warren Zevon. In all of music, there are few composers more daring with lyrics and themes. Mr. Z was a bit outlandish, at times. "Dark" and dismal worked for him, but he was not limited to that - no sirree! Warren's musical talents spread far and wide.


Is there a musical symbol for tongue-in-cheek or smug? There should be - and if life is fair, that symbol is called a Zevon.

Warren was born in 1947 in Chicago, Illinois. His Russian Jewish immigrant father loved to gamble and it's been said that he handled the dice games for mobster Mickey Cohen. Warren's mother was a Mormon of English descent who, by all accounts, was devoted to her family. They moved to Fresno, California, when Warren was a child.

His musical talents would evolve early on; soon he was studying piano and guitar. Igor Stravinsky (yes...THAT Igor Stravinsky) invited young Warren to him home occasionally to study modern classical music. The boy was serious about music and chose it as a career when he was just hitting puberty. By the time he hit 16, he left California for New York to be a singer.

Zevon honed his craft in New York and released his first albums. A song called "Follow Me" made it to #65 on the Billboard charts in 1966, but I have to confess that his first albums came and went without being noticed by yours truly. In the early 70s, he toured with the Everly Brothers as a pianist before the brothers duked it up and went their separate ways. A few years later, I started to take notice of songs by a certain "Warren Zevon" that were recorded by other musicians, like "Poor, Poor Pitiful Me" by Linda Ronstadt.

With the release of Excitable Boy in 1978, Zevon had arrived for the masses. That album produced the classic "Werewolves of London."

If you want a laugh, google Zevon's full discography, if only to read the titles, which include: Bad Luck Steak in Dancing School, Sentimental Hygiene, Mr. Bad Example, Learning the Flinch, and My Ride's Here.

Like most of the musicians I've addressed in the A-to-Z, he remained prolific and collaborated with the best the business; I've even seen him as band leader on Late Show with David Letterman when Paul Shaffer was away.

In the Fall of 2002, Warren was suffering a chronic cough and frequently felt lightheaded. A fear of doctors had kept him away from regular check ups and maintenance. Soon pain and shortness of breath sent him to the doctor. The prognosis was grim: he had cancer of the abdominal lining. The doctors held out little hope that he would live more than a few months.

Rather than submit to the debilitating (and rarely successful) treatment, Warren went to work on his last album. The Wind was released in August of 2003 and reached #12 on the US charts. As much as I loved the early stuff, this last album blew me away. If you only get one Warren Zevon album, get The Wind. Posthumously, it received five Grammy nominations and won two: Best Contemporary Folk Album and Best Rock Performance by a Duo or Group for his duet with The Boss, Bruce Springsteen, "Disorder in the House."

A documentary about the making of The Wind is a gem. [Link]  Fellow musicians surround him and it's apparent that he is still a force of nature, in spite of the obvious deterioration and debilitation as the disease takes it's toll on the man. Mixed emotions get dredged up when I watch it; all that sadness is wrapped in beautiful music as Warren Zevon does what he loved to do most, one last time.

Proving the doctors wrong must have given his pleasure; he lasted longer than "a few months" - he hung on for a year. Warren died in his home on September 7, 2003.

Let's keep him in our hearts for a while...


"Keep Me in Your Heart"

"Disorder in the House"

"Gorilla You're a Desperado"