Z is for Zappa 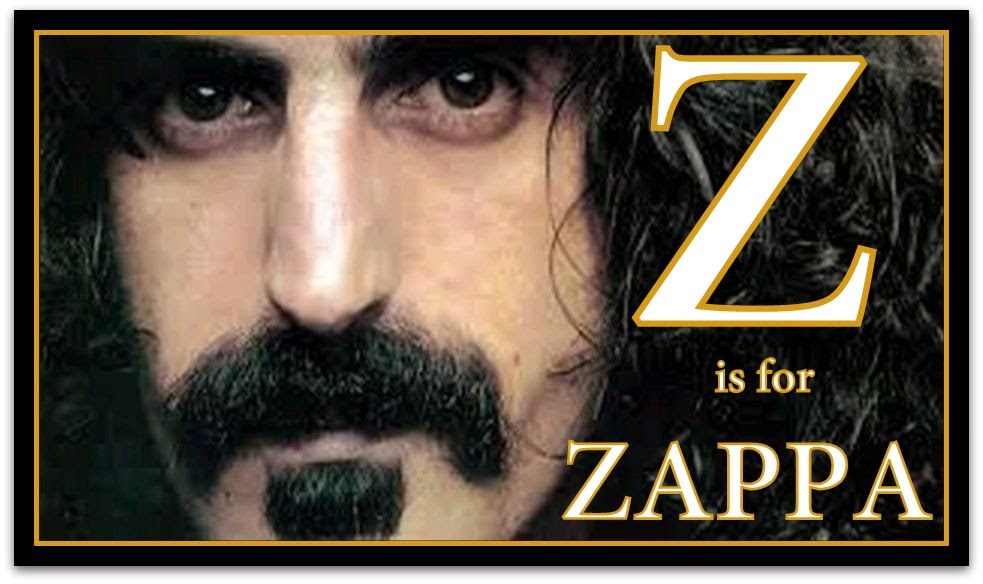 There's no telling how many people saw the Warren Zevon post and wondered why I didn't save him for Z. The answer: he'd crowd out Frank Zappa! We can't abide by that.


Frank Zappa did it all and with flair. I've yet to see a label that truly fits his talents and range. Jazz, rock, orchestral, film, production and actual talent for guitar, check. He could write lyrics that were unforgettable and music that worked in new and complex ways. Frank loved freedom of speech as much as he hated censorship. Religion and politics were criticized and lampooned. On his son Dweezil's birth certificate he stated his religion was "music."

Self-education, social awareness and intelligence was lifted up like a beacon of hope. You always knew what Frank thought about issues.

Zappa was born in Baltimore, Maryland, in 1940 to Francis and Rose Zappa. His father was a chemist and mathematician who worked for the Department of Defense. The family moved often, following Dad's job, eventually landing in California.

Two incidents from his childhood seemed to have an affect on Frank's views. His father worked at an arsenal where mustard gas was stored; the family lived near by. Due to the potential for accidents at the arsenal, the family had to keep gas masks in the home. Young Frank suffered from asthma, sinus problems and earaches. To treat this, a doctor insert radioactive pellets in each ear. It was a different time and radiation therapy was in the early stages. Frank blamed the mustard gas plant for his childhood health issues. Many of his later albums have art work that includes nasal imagery. Mistrust of those in charge isn't so hard to imagine in light of such events.

By high school, he was composing and arranging his own music. In the early 60s, he created music for others and began experimenting with multi-track recording, overdubbing and constant experimentation.

By 1964 or 1965 (sources vary), Zappa had assembled a group and persuaded them to play his music. With the Mothers of Invention, his serious recording career took off. His lyrics expressed his opinions with smart-snark; non-conformity, anti-establishment and anti-authoritarianism viewpoints were the clay he worked in. Frank embraced the musical avant-garde. Though they produced some gems, in-fighting and a rumored lack of effort on the behalf of the band members led to Frank disbanding the group.

Though I'm in awe of his musicianship, I love the funny side of Frank Zappa, too. One of my favorite television clips concerns Frank's appearance on The Monkees, where he changes places with Mike Nesmith. The "jabs" they took at each other are funny. A smarter person would edit this video and just show the Zappa portion...if you know someone like that, I guess I need their number. If you want to see it, click on this magic LINK.

As I looked for clips, I realized I'd forgotten that Frank Zappa really was an excellent guitarist, in my opinion, equal to the greats - like Santana (I'd say Vai, Malmsteen, Homme or Bonnamassa, but I'm not allowed to be relevant or contemporary, according to everyone under 25...cause I'm a geezer). Check out this duet with Steve Vai:

Two songs address tragic events in Frank's life. The first involved a fire onstage that destroyed all their equipment during a performance in Switzerland. The song "Smoke on the Water" by Deep Purple was inspired by the event. The second event occurred in London during another performance when an audience member pushed Frank offstage. This time, the damage was to Zappa personally. A hard landing on concrete resulted in head trauma, as well as multiple fractures of the back, leg,and neck. His larynx was crushed and changed his voice. He spent a considerable amount of time in a wheelchair and when he was finally ambulatory, he discovered that one leg was shorter than the other. The Zappa song, "Dancing Fool" memorializes that terrible accident.

Frank continued to record, produce, write and stir the pot till his death from cancer in 1993. He left behind his wife, Adelaide, whom he had been married to since 1967. He was old fashioned about something, it would appear. They had four children: Moon, Dweezil, Ahmet and Diva.

A blog post can't come close to describing the legacy of this creative genius.

Frank was not just another disco boy:

"I believe that people have a right to decide their own destinies; people own themselves. I also believe that, in a democracy, government exists because (and only so long as) individual citizens give it a 'temporary license to exist'—in exchange for a promise that it will behave itself. In a democracy, you own the government—it doesn't own you."

"There is more stupidity than hydrogen in the universe,
and it has a longer shelf life."


"Art is making something out of nothing and selling it."

"Music is always a commentary on society."

The 2015 Round of
Blogging from A-to-Z
is done! Thanks for visiting!