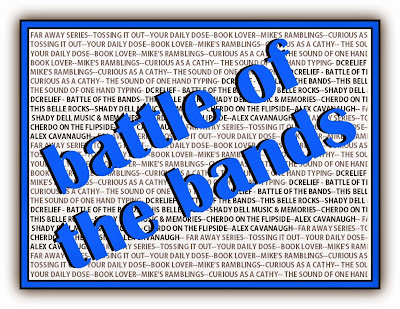 No one has ever taken poor little Cherdo by the hand and explained the colorful history of the Battle of the Bands blog hop, but I believe it was started by Far Away Eyes and Stephen T. McCarthy. Arlee Bird, I think you're in the mix, too! Rather than pretend, I'm just making this feeble attempt to give credit where credit is due.

Let's get with it!

The song "Superstar" was written by Bonnie Bramlett and Leon Russell. Originally, it was titled "Groupie (Superstar)" The group, Delaney, Bonnie & Friends, naturally had first crack at it. In December of 1969, the song was released by Atlantic Records on the B-side of their record "Comin' Home."

Next, Rita Coolidge got her time at bat while singing back up on Joe Cocker's Mad Dog and Englishmen Revue tour.  Dear Rita is best known for "We're All Alone." Leon Russell was the bandleader on that tour - coincidence that she'd use a song he co-wrote? I think not. But Rita couldn't lay claim to the final version of the song...not even close.

As a Tonight Show regular, Bette Midler performed "Superstar" circa 1970. Bette's version echoed the loneliness of the song; it was almost spoken at the beginning. She repeated this tune on a Bert Bacharach special, if you'd like to see it on YouTube. Eventually the song appeared on her 1972 debut album titled The Divine Miss M.

Meanwhile, back at the ranch...

Richard Carpenter heard the Bette Midler version and couldn't wait to do his own arrangement of the song. Karen Carpenter heard Rita Coolidge's earlier arrangement but it didn't really jump out at her as a "must-sing" piece. Richard's treatment of the song won her over. In 1971, the Carpenters recorded "Superstar." Richard hastily wrote lyrics on a napkin for her to follow, tweaking the line "sleep with you" and replacing it with "be with you."  Karen nailed it in one take.


Ladies and Gentlemen, The Carpenters:

Luther Vandross knew a good tune when he heard one. In the 80s, this R&B crooning phenomenon performed his rendition of "Superstar" on tour, frequently stretching it out and turning it into a production in its own right.

The song appeared on the album Busy Body in 1983.


Many artists covered "Superstar," but you just have to chose between these two. Vote in the comments below.

Wait! You're not done till you vote in these epic battles! Check back for results on the 7th and 21st of the month. Let the games begin (of course, I alphabetized it).

CHERDO ON THE FLIPSIDE

CURIOUS AS A CATHY

DCRELIEF - BATTLE OF THE BANDS

STMcC PRESENTS BATTLE OF THE BANDS

THE SOUND OF ONE HAND TYPING