I Go Crazy (The Soundtrack of My Life) 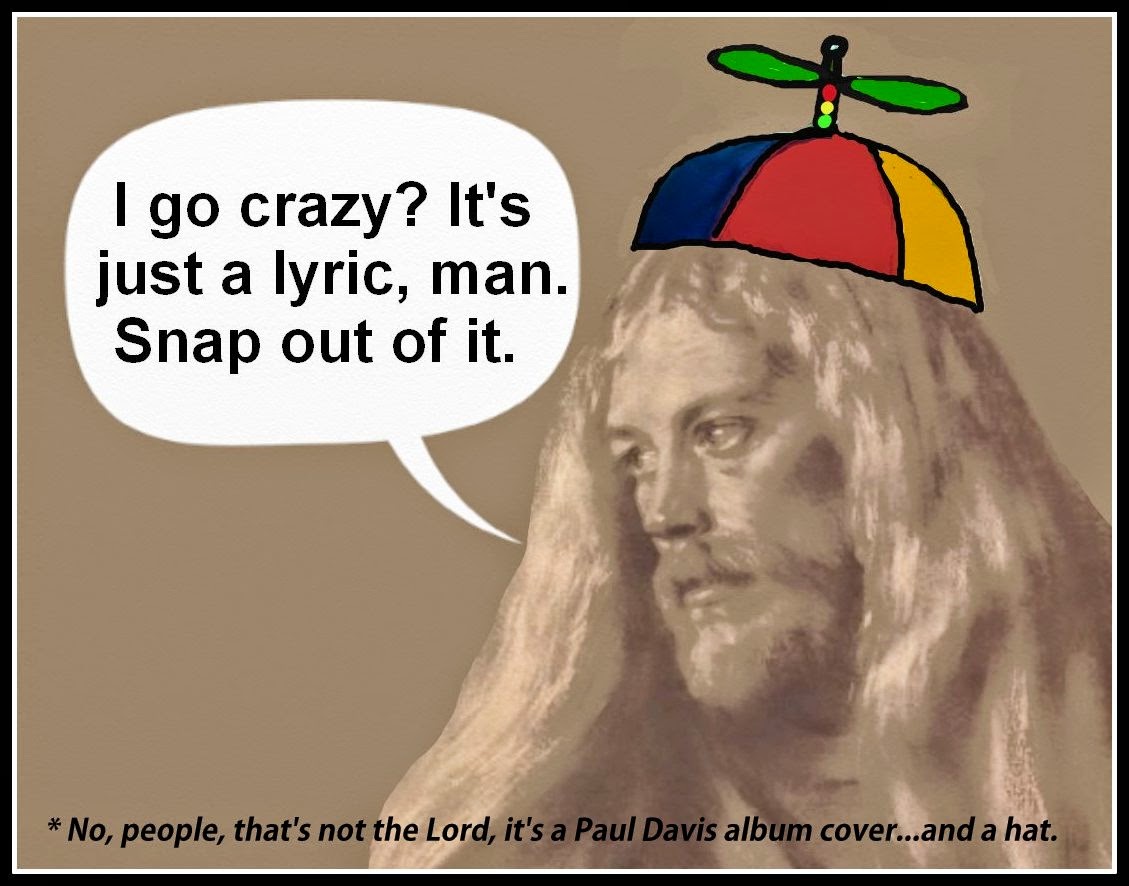 My blog buddy, Robin, of Your Daily Dose (check it out, people!) has been encouraging me to do "the soundtrack of my life" - a theme she does on her blog. I have to admit, I really like the idea. In fact, I've done one similar to it with The Armchair Squid, Cygnus and Suze when they hosted Songs of Summer last July. The specific song I wanted to address eluded me, possibly because I'd just spent a month totally devoted to song. Cherdo does love the tunes.


Then, it hit me. A memory of a bygone time. A little tale of love...er, no, not love...and loss...well, kinda about loss. More on that part later. It happened when I was a young single person. Single days, don't you love 'em? I dated some great guys 94% of the time. I've done the math.

I met a fellow I'll call Jerry (because that isn't his name) when I was out with a friend one night. He was attractive, funny and charismatic. Lo and behold, he asked me out and at the time, I was thrilled and flattered. We went out a few times; it was fun.

Then I realized that he looked familiar because was a member of a band. Duh. Not only that, I had a friend that had several of this band's albums. He would freak, I thought, if he knew that I was dating this guy - we actually went to see him once. I think he got a kick out of it and I have a fond memory of Jerry and my other pal sitting in the living room singing songs from an album of Jerry's.  Man, I thought, I hit the jackpot. Unfortunately, that was one of the last fond "Jerry memories" I would have for a while.

At the risk of being indelicate, Jerry was nuts. It seems that somewhere between the last album and the first date, Jerry had some sort of break with reality. As a mature adult, I would never mock a person with "issues," but as a young person experiencing a very real person going down the wackadoodle rabbit hole while holding my hand, I didn't know what to do or think.

Jerry would ramble on about how he was a new prophet; in fact, he told me, he had a big part in the Second Coming. He might be the Antichrist. I'm not a biblical scholar but I've read the good book and though it doesn't say it specifically that you shouldn't date the Antichrist, I think it's a given. I'm gonna go out on a limb and say my concerns were not unfounded.

In desperation, I called his father (whom I had never met at that point). Apparently, Jerry had talked about me and his Dad referred to me as a "stabilizing factor." Stabilizing factor? That was not what I shoot for when I date; in fact, I was buying into de-stabilizing in a big way. Jerry started to scare me a bit with his delusional ramblings and I began to think that I, personally, couldn't help this situation. My presence might even aggravate it. I'd informed his family; that was the right thing to do and they were the people to handle the situation - not some girl he dated a while.

Dad called me. Would I consider staying with Jerry? I stressed the fact that I'd actually just gone out with him for a few months and really - he scared me now. Dad confessed that Jerry had been in a high dollar mental health institution. Oh, for crying out loud, that was a gem you didn't want to keep to yourself, did you, Dad?

Using every cliche I could muster ("Let's be friends," "It's not you," "I'm not looking for a serious relationship, " yada yada yada), I let Jerry know that I was calling it quits, best wishes, if the phone doesn't ring - it's me.

Jerry wasn't necessarily down with that but he did back off - until Christmas Eve. If you're going to guilt trip someone like me (you know...a sap), call me on a holiday and tell me how you're housesitting, all alone on the holiday, and you just want to give me this small gift. Coward that I am, I took a friend (male!) with me and he sat in the car, waiting.

It was freezing and the snow was blanketing the whole neighborhood. Jerry asked me to step inside out of the cold while he got the gift. I could tell it was a record album and as he started to hand it to me, I saw the wackadoodle expression slowly appear. He started talking crazy and at the same time, opening the present. Walking to the stereo, he was jabbering about this song that expressed exactly how he felt."

He argued the point: it's Christmas, just three minutes to hear a song, what's the harm?

Then the album started to play: it was Paul Davis' song, "I Go Crazy." This can't be happening, I thought. My face started to contort in a way that only happens when I am trying not to say something snarky. Keep. Snark. In....Not. The. Time. Or. Place.

"Goodnight, Jerry. Merry Christmas - I have someone waiting in the car." I beat feet out of there. I left the album.

The soundtrack of my life. You can't make this stuff up.


Postscript:
Years later, I am a divorced mom with two very young children, living in a duplex. A little market was about a hundred feet from my front door. As I went to my car one day, I saw Jerry taking out the trash - he was working at the market. I froze; I didn't know what to expect and the thought occurred to me that he might not realize it was me. A broad smile appeared on his face and he announced that he was so thrilled to find out I lived there! We could have lunch and talk about old times!

That's how I roll.