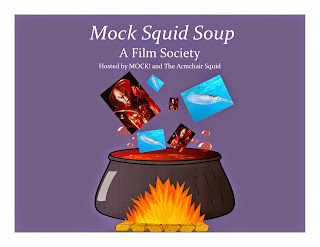 MOCK! and The Armchair Squid are the proud hosts of Mock Squid Soup: A Film Society.  Each month, on the second Friday, they host a bloghop devoted to a particular movie.

Last week, all the participants posted trivia and encouraged our readers to guess the movie we chose. My pal, Mike, from Billions of Versions of Normal guessed Forgetting Sarah Marshall.  Good job - it was a herculean feat! 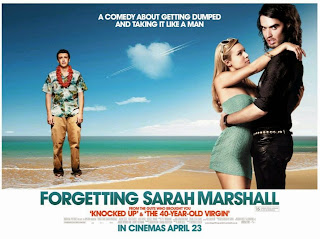 Sarah Marshall (Kristin Bell) is known far and wide for her television series, Crime Scene: Scene of the Crime.  But her less successful boyfriend, Peter Bretter (Jason Segel), is in a career slump. He lays in bed, watches television, eats cereal and neglects his projects. Can it get worse? Of course it can when Sarah unceremoniously dumps Peter and breaks his heart. 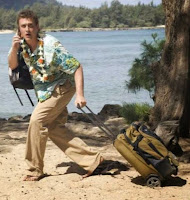 With a little push from his brother (Bill Hader), Peter decides to take a vacation in Hawaii to recover and forget. Unfortunately, Sarah and her new boyfriend, rock star Aldous Snow (Russell Brand), are at the resort, too. Desk clerk Rachel (Mila Kunis) takes a shine to Peter and helps him score an expensive room at the resort. When he arrives at his room, he discovers his noisy neighbors are the amorous Aldous and Sarah.

Rachel digs Peter and the flirtations begin. While meeting in the hotel bar, Peter reveals his plans to write a musical about Dracula and have puppets for the cast. It's painfully bad.


Meanwhile, Aldous drops the bomb on Peter: he and Sarah had actually been seeing each other for over a year. Peter can't help but confront Sarah about this betrayal and she offeres the weak excuse that she was feeling disconnected in their relationship and that was the reason she strayed and eventually left. In the midst of Peter's angst, his relationship with Rachel is heating - but he has not totally moved on from his relationship with Sarah.

In a gesture of civility, the two couples attempt to have dinner together. Note that I said attempt; it's  a study in awkwardness that leads to a competitve love making phase that's hilarious. Aldous realizes that Sarah is not over Peter and decides to leave.

Peter attempts to console Sarah and makes an ill-fated move on her. He still thinks he has feelings for her, but as things start to heat up - he realizes his mistake. Rachel has replaced Sarah in his heart, but when she hears about Peter's encounter with Sarah, she is hurt. Thinking they're through, he returns to Los Angeles to work on his Dracula musical.

Unsure of her response, he invites Rachel to L.A. for the opening night of his musical, A Taste for Love. Rachel flies in to see the performance and meets with Peter afterwards. The spark is still there...awwww....

Why do I love this movie? There are too many funny one-liners to count and the awkwardness just makes me guffaw. Lastly, it is oh-so-quotable, which always wins the big points.

Jonah Hill plays the waiter, Matthew, who is obsessing over rockstar, Aldous, and wants him to listen to his demo CD. Once he has it, he pesters Aldous about it.


Aldous: Oh, I was gonna listen to your CD, but then I just went on living my life. 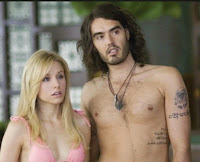 Aldous (After spilling something on his shirt): Oh God, please take my eyes, but not the shirt! 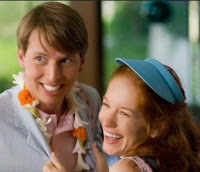 Darald Braden (Jack Brayer) is a newlywed at the hotel with his bride. Their intimate troubles are an ongoing subplot, and Jack Brayer was the perfect actor for this role.

Darald: Lemme just say that, if God was a city planner, he would not put a playground next to a sewage system! 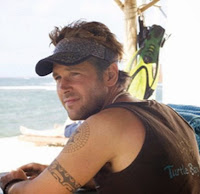 Peter Bretter: Are you Chuck?
Kunu: Oh man, you know, they won't change that flyer. That's my mainland name. My Hawaiian name is Kunu!
Peter Bretter: Oh, cool, sorry man.
Kunu: Nah, it's all good!
Peter Bretter: Does Kunu have some, like, cool Hawaiian meaning?

This movie never fails to make me crack up.

It's not too late to be part of the Mock Squid Soup party. Sign up below!