Tuesday Newsday - Give It a Swat! 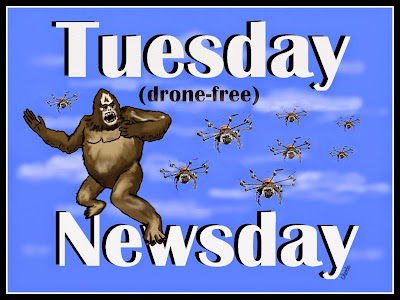 Animal news stories that caught my eye this week. Not the human-animal kind, though I'm sure there was plenty of that sort of news.
1. If you don't like something, knock it down:

Chimps at a zoo in the Netherlands didn't like a drone intruding on their monkey business, so they swatted it down. The drone was equipped with a camera that captured the ingenuity of the chimp, as well as the destruction of the drone.


I'm wondering if we couldn't train these chimps to monitor our skies. After all, they got it right the first time around. You can't argue with 100% success.

2. If you don't like weeds and underbrush, chomp it down:

Hillside brush is a nuisance, so some communities (including mine) have been creative with weed wacking work by abandoning it completely and letting goats do it for them. It's a great idea until you tell the goat, "Stay!"

Apparently, a community in southern California hired a free-spirited herd of goats for two weeks and gave them the task of clearing away weeds and unwanted plants.The problem was that they took a break (union goats) and wandered all over the roadway.

Ventura County Policemen were said to be "severely outnumbered."

Cherdo Trivia: I used to raise, breed and show Nigerian Dwarf goats. I think I know a thing or two about them. Let me clue you in...
Armed with that knowledge, I wonder if the people who stopped to help are feeling like they are accomplishing anything? Spoiler alert: The goats will go back to the hillside when they feel like it, and in the meantime they will just stare at you people and...well, you know the answer now.

Michael Duffey was sleeping "down below" on his boat at the San Diego Yacht Club one night, only to awake to the sound of snoring and heavy breathing. Thinking it was one of his friends crashing at his place, he went back to sleep.

Later, he woke and once more heard the snoring. He looked over at the other bunk and saw a 35 pound sea lion pup curled up on the bed and getting his beauty rest. Duffy speculated that the pup might have been looking for his mother and so he shoo-ed it away, back into the sea. He remarked that it seemed very calm and used to humans.

I love animals. I'm jealous of Michael Duffy. I would have crawled into the sea lion bunk and taken a seal-fie.

This is my new holiday wishbone wish: I hear loud snoring and heavy breathing every night; I'm hoping to one day wake to a sea lion.

Sorry, Hubzam, but a girl gotta have a dream.