Games on the Brain 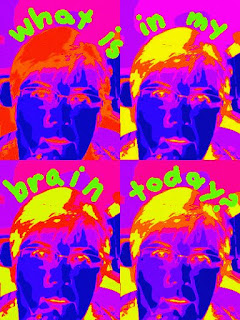 On June 15, Sage had something on his blog that I thought was interesting. If you haven't read his Musings blog, you're missing out. His pictures are like a mini-vacation at your desk - I love them.

Rather than try to explain it, I'll just quote Sage's site and do the ole' cut and paste of his list:

"...On another matter…  I am curious if my blog titles play a role in enticing you to read what I say?  I learned of a new program and decided to analyze my last ten posts and found that when it comes to titles, I’m not exactly hitting them out of the park.  Here are my scores according to CoScheduler’s Headline Analyzer."

HEADLINE HISTORY (WITH NUMERICAL SCORE)
26Going to Ground
52Paddling Open Water to Ossaba Island
61The Man with Six Typewriters
26The River Home
52Talking about the weather a few other things with some photos added for good measure...
53An interview with Chrys Fey
64Don't think that I've forgotten: Cambodia's lost rock and roll
64Things that I don't understand, a rant by Nevada Jack
60Things that I don't understand
41Paddling to Daufusaki Island

"Almost all of my blogs received a letter grade of B+.  Today's title received a C- and a score of 15!  (I  had previously considered using "A hot weekend on the water and pondering blog titles" which received a rating number of 65, but I thought that to be too long).  How do you chose a blog title?  What kind of title catches your attention? "

Okay, I looked at the titles on Sage's list; I would have read all of them. In fact, I think I did.

But this started me thinking about loading some titles in the analyzer and seeing what they ranked. The site even had a pdf of key words you can use to improve your titles.

So I started loading titles and looking at scores. Sage, I'm not hitting them out of the park either, but I don't care because this has turned into the best free game ever. I think only three of the real titles I loaded broke a score of 70 or more. I started making up titles from their key words on the list. The titles got more and more ridiculous and my son and I howled at some of the results.

The highest real titles from my blog that I checked still got me no credit. They were the name of two books I reviewed. "I Go Crazy (The Soundtrack of My Life)" was the best I did on the actual titles I've used in the past.

Nothing we did could break 84. Here are some of the titles that I've cut and pasted from the list (and framed, 'cause I'm a fancy pants girl): 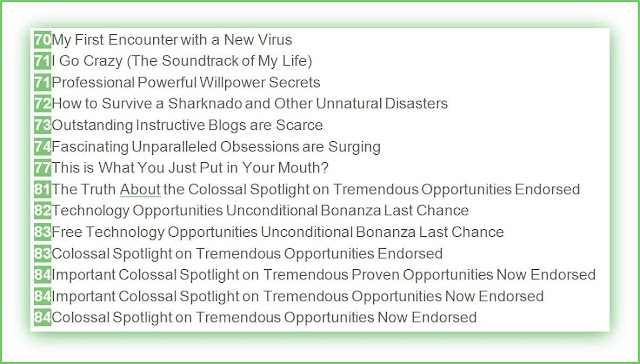 Only four of the titles were real, of course.

Everything I about this screams "great challenge!!" So, let's play!

Go to the analyzer. Enter some titles or (much more fun) make up one. Make up twenty! See if you can beat my 84. The analyzer obviously favors the terms on the pdf list. Then post the title and the score. I'm betting that someone can beat it, it just won't be me.

And to answer Sage's original question:  I read what interests me and if I follow a blog, I'm interested. You can put any title on it at that point and I'll try to get to it. If I don't read it, it's probably because I'm busy and out of the house.

I can almost guess who will do this and who will break a leg to beat 84...and that makes me smile. Good luck!