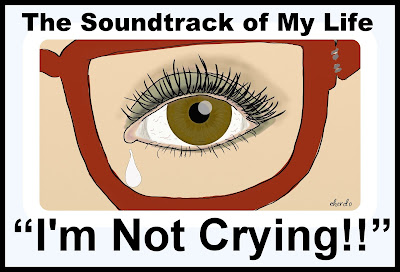 My friends have my back and frequently, they suggest posts from stories they have heard. In a feat of blogger frugality, I realized it could be a Soundtrack of My Life post, too. Sweet....

When I was in my late teens and early twenties, I had a lot of oral surgery. You'll never guess why...really, you won't. My dentist used to say my mouth was way too small for the amount of teeth I had. If you ever feel the need to say, "Cherdo has a big mouth," I'll stop you in your tracks with medical proof that is not the case at all. I even had a third set that had started to form on the right lower side of my jaw. You know, just in case I needed more than average.


Now, I'd never have something simple that could be done in an office...nooooo! Each procedure had to be done in a hospital, under general anesthesia and I never reacted to that well. Anesthesia made me sick as a dog and I usually woke up with a terrible headache, to boot. No one would ever read past notes, I guess, because I kept getting the same thing over and over.

The final surgery I had done in my early twenties was a painful extraction of a wisdom tooth that somehow ended up in a sinus. My theory is that right before I was born, and angel took my head off and shook it like a maraca...again, it's just a theory.

When the surgery was complete, I woke up in the Recovery Room with my old friend, the Killer Headache. There was a new twist to this, too - one side of my head was covered by a huge ice bag and inside my mouth, I had a crazy amount of gauze packing on the right side. I thought the ice bag was leaking because my face and pillow was soaking wet. Then I realized that my left eye, on the opposite side of the surgical playground, was tearing like there was no tomorrow. It didn't hurt, it just turned into a faucet.

Major grogginess still had a grip on my when a nurse came around to take my blood pressure and check the facial ice berg. Noting the tearing, she leaned in close and said, "It's all over now, honey. There's nothing to be afraid of..."

I realized she thought I was crying.

"Ahhmmm naw cwrywing," I said. The English translation of that mess would be "I'm not crying," if I could pronounce my words clearly with that bed-pillow-sized wad of gauze and Titanic-sinking ice bag.

It was shift change and I overheard the nurse tell the next shift, "That lady over there had a rather involved oral surgery...she is really upset and scared." Great.

Florence Nightingale walked over to the cart where I lay immediately after report. She began to rub my back and say, "It's okay...it's over...don't be scared...you're fine..."

"AHHHMMM NAHHTTT QUYING, NAARSE," I said. She smile kindly and said something like "yes, dear...I know" - all evidence to the contrary. She had no idea what I was saying but she wiped away the waterfall on my face repeatedly.

I drifted off to sleep and as I awoke, my new nurse was telling another nurse that I was even crying in my sleep.

"AHHHHMMMM. NAWT. CWYING, MAAAAM!" No one believed me. It was irritating and I still had the killer headache.

They decided to put me in my room and as they wheeled me upstairs, I'll bet they told me ten times that everything was going to be fine. Meanwhile, my second worst anesthesia side effect was kicking in: I was super nauseated and starting to think this would not end well. My stomach was not on my side and I knew that hurling was imminent. I had to get their attention; I didn't know what to do about all that packing in my mouth and I was really getting worried that the arrival in the room wouldn't happen soon enough. Now, I did look like a crazy person as I clawed at a washbasin as they transferred me into a bed.

My worst fear happened. Ouch. The orderly almost honored me with a sympathy hurl. Goodbye, packing and ice bags. But at least I could say, more clearly, "Ah ahm nawt crywing. Ma ah is tearwing."

"Let us pull you up in bed, " said the orderlies. With one hand under each arm, they simultaneously put a side rail down on my hand. Yowza! That hurt! And now I had real tears running down my face as I cradled my throbbing hand.

Every time I hear this song, I think of that little visit to the hospital. At least it makes me smile when they say: "I'm not crying..." They look like they're on the brink of insanity at the end. I can relate.

Any one of these fine friends can do a better "soundtrack of my life" - so check them out, and often!

StMcC Presents BATTLE OF THE BANDS

Cherdo on the Flipside