In Case of Emergency...I'm with The Rock 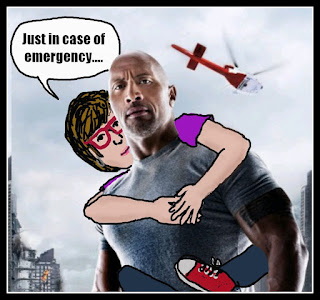 If there is ever a natural disaster and we pair up for maximum chance of survival, I'm with Dwayne Johnson: The Rock. Last Friday, I did a case study to help me choose my partner when I saw San Andreas, his new movie. Forget about 2D or 3D - I saw it in 1D... D as in Dwayne.


Now, Paul Giamatti was pretty much the "hero seismologist" in this flick, but I don't see me and Paul outrunning an earthquake any time soon. It feels so wrong. There's no way Paul Giamatti would let me ride piggy back and, if it gets too scary, that is my assigned seat.

Don't get your britches in a knot; I'll make sure Hubzam is relatively safe ('cause he is a relative) and then I'll tell him, "Wait here! The Rock and I are going for help!"

Here are a few of my observations:
The Rock makes mayhem look good. One more time, peeps: if there is a disaster, I got dibs on The Rock.
Posted by Cherdo at 12:00 AM