Mock Squid Soup: What We Do In The Shadows 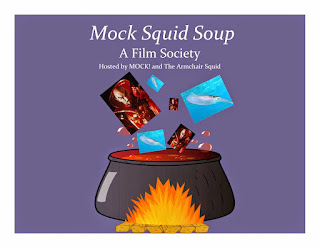 MOCK! and The Armchair Squid are proud to present
Mock Squid Soup: A Film Society!

How could your old pal, Cherdo, possibly pass up any
opportunity to frolic with Mock & Squid?

You can jump in the cauldron, too!  Sign up below!
This month, everyone gets to throw a movie of their own choice into the pot.  Here's the wrinkle for June, a fabulous idea from Mock:  the week before our gathering, a trivia challenge on Friday!  Everyone was invited to post three clues about his/her movie for others to guess (there's some smart movie buffs out there, starting with author Alex J. Cavanaugh who NAILED it!). 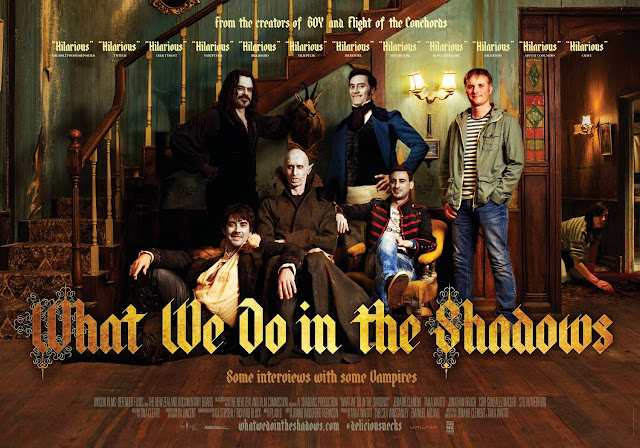 What We Do in the Shadows (2015) comes from "Flight of the Conchords'" Jemaine Clement and his long time collaborator and friend, Taika Waititi - the brilliant writers, directors and actors of this funny mockumentary based on a short film they did of the same name. This film is rated R, but I'm not sure why (fake blood?). There's a bit of language. Initial reviews have been great and the film was well-received at Sundance and the SXSW festival.  It's currently available on iTunes and Amazon.

I love independent film and this one does nothing to change my mind about that. I'm also a huge "Flight of the Conchords" fan and the deadpan comedic delivery. Jemaine Clement is one of my favorites. Taiki Waititi's film, Boy, was also pretty impressive; this had to be a match made in heaven.

Android slave that I am, I had to wait for this to hit Amazon. Cruelly, I was taunted by it's much earlier appearance on iTunes until finally, my wish came true and I could rent it online.

As the legend goes, vampires live forever. That's not as easy as it appears with all the adaptations one must make over the centuries. Vampires Vladislav, Viago, Deacon, and Petyr live together in the town of Wellington (NZ). I use the term "live" loosely and quite possibly incorrectly. These four undead flat mates open their home and lives to a documentary crew to reveal the reality of the burdens on the modern day vampire in society.

The vampires couldn't be more different in personality and habits. Vladislav (Clement) is the dark, sinister and oversexed 862 year old vampire who can turn into an animal...but he never gets the face right. One of the funniest scenes in the film has a black cat with the face of Vladislav frightening frantic "dinner guests" being chased through the house.

Viago (Waititi) is a 379 year old vampire described as "an eighteenth century dandy" and acts as a bit of a tour guide of their activities.

Deacon (Jonathan Brugh) is the 183 year old bad boy and youngest of the group and 8000 year old Petyr (Ben Fransham) is a dead ringer for the silent movie character of Nosferatu. Deacon has his own female slave, Jackie (Jackie Van Bleek) who does all his cleaning and errands - she desperately wants him to turn her into a vampire, but Deacon is stringing her along.

Just like most roommates, they fight about chores and experience frequent clashes of egos. 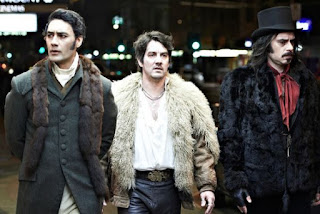 The camera crew follows the group as they get dressed for a night of clubbing. Trying on clothes is complicated when you can't see yourself. Then there's the issue of getting in the club - vampires have to be invited.

Nick (Cori Gonzalez-Macuer) joins them as a new vampire, somewhat accidentally, and his human friend, Stu (Stuart Rutherford), soon becomes everyone's favorite at the flat. Stu's knowledge of modern technology comes in handy as he schools the vampires on such things as selfies and online shopping. Nick's enthusiasm for his newly acquired vampire state irks the others; while they instruct him to keep it on the down low, Nick is walking past nightclub patrons shouting, "I'm a vampire!"

Later, Nick gets banished from the house when his enthusiasm leads a vampire hunter to the flat and Petyr is killed when exposed to sunlight.

The vampires encounter a pack of werewolves while out and the two supernatural gangs exchange typical insults. Werewolf leader, Anton, is played by New Zealand comedian Rhys Darby. As the leader, he is the moral compass of the pack who tries to keep the other werewolves in check. "We're werewolves, not swearwolves," he admonishes.

The guys are going to Wellington to attend the Unholy Masquerade Ball at the Cathedral of Despair - a gathering of witches, zombies and "The Beast" (Vladislav's name for his ex-girlfriend, Pauline). The discovery of the human film crew leads to an altercation and a narrow escape. On the way home, they encounter a group of werewolves and Stu is attacked. Later, he reappears as a werewolf. Anton extends the olive branch and the two groups become friends.

I highly recommend this flick, if you want a giggle and a smirk.