Throw Up..Er, Throwback Thursday: The Temple of the Pink Bandanna 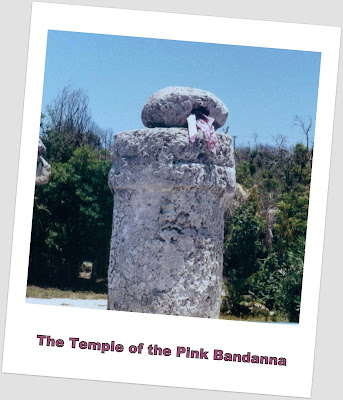 Once upon a time, I used to travel a lot more than I do now. Cruises were my favorite. In later years, my Mom would start to travel extensively and she told me that it began with her living vicariously through me. That cracks me up.

The night before I was leaving on a cruise to the Western Caribbean and Mexico, I visited my Mom because she had announced excitedly that she made me a present for the cruise. In fact, she made several just to sure that I got the color I wanted. Proudly, she held out her handiwork.

I froze. There was a moment in time when I wondered if she was kidding as my peepers gazed upon the worst of the worst: crafty fashion. She had made three bandannas; each one was "fringed." On each strip of fringe, she had added plastic beads. To me, this atrocity was quite possible the tackiest thing I'd ever seen and you wouldn't want to lay odds on whether or not you'd ever see me wear it.

My gaze went back to my Mom's face; dear Lord, she was serious. Mind your manners, Cherdo; I acted thrilled.

The next day, I showed my buddy Jack and he laughed and laughed. Dang it. In spite of all that, I took it with me. On the first day of the cruise, I told my buddy, BH, about the bandanna and she shared my horror but we made a concerted effort to shake it off. We decided we'd get the bandanna in as many pictures as possible.

The pink monstrosity found it's way into the shower...the deck chair...draped over the arm of a waiter delivering a drink. It was the place mat at a meal. A showgirl let me tie it on their feathered headdress.  We started calling it Pinky Bandanna and reminded each other: "Hey...who has Pinky? Don't forget Pinky!"

We took Pinky on a shore excursion to Playa del Carmen. About twenty children were at the pier selling "Chiclets." Not one of them would take the scarf as a gift. We offered to pay them AND give them the scarf - they said no. If it came to light that they reported us as American weirdos bugging kids, I wouldn't be surprised. My picture might be on the Yucatán's most wanted list. Not that we did anything that bad; I'm basing that at the horrified look they gave us when we offered Pinky as a gift.

Walking back to the ship, I still had Pinky and about a hundred Chiclets. For the record, Chiclets are as difficult to give away as pink beaded bandannas.

The bandanna went with us to ancient ruins and we actually tried to put it on an iguana. The number of humans that were willing to put it on was a solid "one."  BH's husband, Joe, actually donned the craft fail and pretended he thought it represented the height of fashion.

By day five, the bandanna had kind of grew on us. Imagine sharing a pet that went with you everywhere.

On the last day, I went to the back of the ship and tied it on the rope right under the cruise line flag. My brilliant plan involved a picture of our gang with our new official mascot, Pinky Bandanna. My knotting skills were sub-par and a brisk breeze sent it off into the Caribbean. Immediately, we all ran to the railing and gave a collective, "Awwwww! Piiiinnnkkky!"

Every time I see an article about sea life migrations in the Caribbean, I look at the spot where the creatures WON'T go. I think Pinky is there - scaring fish.
Posted by Cherdo at 12:25 AM