"God Give Me Strength" BOTB 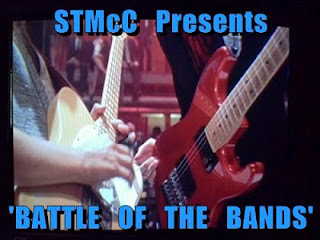 It's the first of the month and that means it's time for
Stephen T. McCarthy's Battle of the Bands!


Okay, band connoisseurs, it's time to look at an original and two covers. Today's choice comes from one of my all time favorite artists, Elvis Costello. Though Declan McManus (his real name) never needed any help writing songs, he does collaborate with a long list of noteworthy performers.

Elvis Costello wrote "God Give Me Strength" with none other than Burt Bacharach. Not too shabby. The song appeared on Costello's album, My Flame Burns Blue, released in 1996. It was featured in the movie Grace of My Heart where a lip-syncing Illeana Douglas sang (lipped?) it.

Hey, it got a Grammy nomination, so why I am poking fun at Illeana Douglas? I don't have a Grammy (not any more - my dear grammys have passed away, God rest their souls).

Most people who recognize "God Give Me Strength" connect it to the movie, but many artists have tried to make it their own.

Burt and Elvis, show us how it's done...

The first contender is Kirsten Vigard; it's only fair. She was the real voice behind the lip-syncing Illeana in Grace of My Heart.

On a side note, I've often wondered if Illeana Douglas was part cat by the motion her feet make as she sings. My cat, Mittens, used to do that when she found a sweet spot to lay down. I keep waiting for Illeana to purr and lay down. Meow.

It's always good to have an oldie but goodie chime in to the battle - how about Bette Midler? Let's hear what you can do with it, Bette...

BOTB occurs on the 1st and 15th - then check back for results on the 7th and 21st of the month. Let the games begin (of course, I alphabetized it). If I missed a new participant, I'll add you as we go along.


ALEX CAVANAUGH
ANGELS BARK
BOOK LOVER
CHERDO ON THE FLIPSIDE
CURIOUS AS A CATHY
DCRELIEF - BATTLE OF THE BANDS
FAR AWAY SERIES
HOLLI'S HOOTS & HOLLERS
J.A.SCOTT
JINGLE JANGLE JUNGLE
MIKE'S RAMBLINGS
NOVEL BREWS
QUIET LAUGHTER
STMcC PRESENTS BATTLE OF THE BANDS
THE DOG LADY'S DEN
THE SOUND OF ONE HAND TYPING
THIS BELLE ROCKS
TOSSING IT OUT
WOMEN: WE SHALL OVERCOME
YOUR DAILY DOSE
Posted by Cherdo at 12:17 AM