Last week, I included Juggernaut (my oldest son) in a post and I thought I might as well even out the field and talk about my wonderful middle son, Magoo. Gonzo, the youngest, is the only one who still lives at home and consequently, he pops up more often right now. I'm pleased to say that all my boys live nearby and I get to see them frequently.


Magoo has a huge heart and is "all in" for anything he finds interesting. Hyperfocus and obsession is apparently a genetic trait I've passed to all my love puppies. As a child, he was a huge fan of the movie Ghostbusters. Marketing, being what it is, flooded the airwaves and toy store shelves with toys that tied in to the movie. That was all Magoo wanted for birthdays or Christmas. He literally wore out toys and we replaced them. Not broke them...wore them out. The boy was serious about his Ghostbusters obsession. I admire passion; I really do. He had (and has) it. 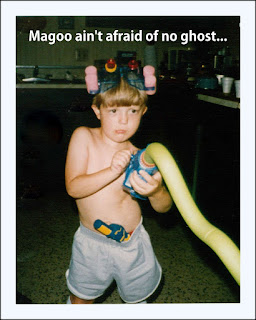 As a child, Magoo was the kid who would give a friend a cookie and take one for himself. Then, when his friend gobbled down his own cookie, Magoo would feel bad eating in front of him and give the friend half of his own cookie, too. A few times, it set him up to be taken advantage of but his heart was always in the right place.

When people spoke about the young Magoo, they always mentioned that he was the most sweet natured and pleasant kid around. Hey, that's the stuff Moms want to hear, right?

The boy had his own sense of style. And yes, that is another Ghostbusters' toy in his hand.

A few years back, Magoo and his girlfriend, Lady L, started doing balloon characters and face painting as a side job. For Mother's Day, I got a balloon bouquet - because they can't just do poodles and swords. That's not their style. Magoo added a magic act that is pretty impressive. 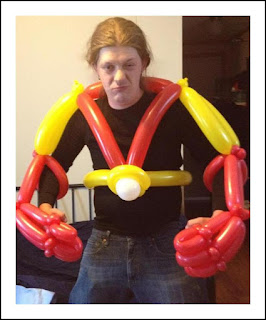 Magoo has the thickest hair (again - all the boys do). He grew his hair out and donated it to Locks of Love. Such a sweet gesture! I couldn't believe how long it got! He kept it pulled back neatly and it just sort of snuck up on me.

As an adult, he has maintained his kind nature and I love to hear his voice on the phone saying, "I had to check on my little Mommy." He makes the kid-voice legendary. Occasionally, I fantasize about moving to the beach and Magoo will say, "Just let me know because I'm following you."