When Gonzo was about five years old, he had an opportunity to appear in a movie as an extra. Filmed locally, all of East Tennessee turned out to try to be extras. Both Gonzo and Magoo got a chance to do it (Juggernaut and Magoo would be in the next movie in the series; double whammy).

Gonzo thought the extra gig was so cool, but not for the reasons you might think. The boy didn't care one iota about movies or television specifically. He really loved the costume and the potential to earn money. To him, they were paying him a million dollars. Actually, I think he got a little over $100, but when you are used to getting $1 for allowance when, and if, your Mom remembers to give it to you ...$100 might as well be a million. Magoo wasn't making $100 a day doing anything in high school, so...yay! As I recall, he was pretty psyched, too.

The day of the shoot arrived and I got Gonzo up early (5 a.m.)  to shower and get out the door. Magoo was bleary eyed, having watched television a little too late the night before. We arrived at the set early in the morning and he went straight to the costuming people. The first thing the costumer did was to dirty up his hands and nails; he gave me a disapproving look. He's a bit of a clean freak.

The heat was stifling and shade was nowhere to be found once they got to the set.

In this particular movie, set in the early 1800s, there was a town near a river and Gonzo got to be on a barge on a river in his "scene;" the same barge that you see on the cover above. A lady played his mother and they both boarded the barge and it began to float down the river. The director told him to run to the front of the boat and climb up on the bales of cotton. The ledge on the boat looked so narrow - and the water was real! I questioned my maternal instincts and thought about The Twilight Zone and Vic Damon. Meanwhile, Magoo was an extra who walked the street (over and over again). Not nearly as exciting for Magoo, but I was still excited for them.

In between shootings, Gonzo and Magoo would sit with me in the hot sun. Gonzo was wearing a linen shirt and a wool jacket and cap; Magoo was dressed similarly but not in a wool jacket. Gonzo was red faced and sweating, so I told him to go ahead and take off the hat and jacket. The boy would not take them off because "the lady told me I had to wear this." He is that literal and has always been so. A kind staff member gave them popsicles (or else both boys would have melted).

We had hoped the guys would both have at least a minute in the final product but that didn't happen. There was a single time we saw Magoo, but no Gonzo. Still, it was pretty exciting to see them film and to have the kids be a part of it. All in all, they were on set about ten hours.

On the way home, the casting director called and asked if Gonzo could be in a Kenny Chesney video. I asked what the song was going to be so I could look up the lyrics first. I know she thought I was a nut but hey - I'm the Mom.

Filmed at a local school, the part of the video Gonzo appeared in involved a playground. Three boys were on set and they became instance buddies for the day. This was a much more intimate group and Gonzo was pretty intrigued by the camera job or boom...I can't tell the difference and either can he. It was a camera lowered over the spinning merry-go-round.

At one point, the director asked which boy was willing to sit on the center pole of the merry-go-round with outstretched arms while it was spinning. A camera was poised to film it from above. They all shook their heads in a mutual "no way!" Eventually, one brave soul's mother talked him into it. Gonzo still thought it looked dangerous and the kid seemed a little freaked out by his facial expression.

When the video was released, we were once again glued to the tube looking for Gonzo. His 15 minutes of fame was about 14 minutes and 45 seconds short - but we did see him. Boy, it doesn't take much to keep us happy. Grandma got a kick out of it, too. That's all we really wanted, in the end.

Come to think of it, if something makes a good story, THAT'S all we want from it. 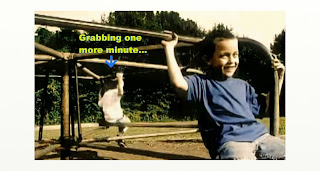