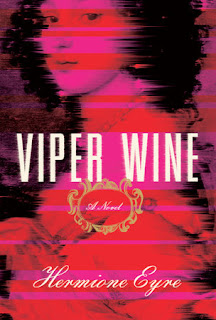 In the time of Charles I, the dazzling Venetia Stanley was a  beauty that turned heads and inspired such notables as the painter Van Dyck. Viper Wine, by author Hermione Eyre, is a postmodern piece of historical fiction that follows the real-life Venetia Stanley's desperate quest for eternal youth and her mysterious death at age 33.


Venetia Stanley has money, love, and court influence, but her beauty is the trump card. With such beauty came power and an unhealthy addiction to the adoration and attention she garnered. Time, however, is not on her side and she fears the toll of normal aging on her good looks. The arrival of coarse hair and the sagging skin of middle age makes Venetia frantic. When she hears of the mysterious "viper wine" that can restore and maintain her beauty, she presses her devoted husband, Kenelm, to provide it.

Sir Kenelm Digby, is a celebrated personality in his own right armed with intelligence, the ability to time travel, court diplomacy and the necessary alchemy skills to provide Venetia with the potion. Premonitions haunt him and make him cautious. Though he could grant Venetia her wish, he has no compulsion to do so. To Digby, none of Venetia's beauty has diminished. While Eyre's characters reflect the court intrigue of the time period, she allows Digby to tap into the future in a fascinating and somewhat surprising way through his premonitions. “Kenelm was haunted by the future, which announced itself in echoes and pratfalls, in twitches as his body fell asleep, or hypnagogic visions as he daydreamed, when ideas from the future sounded to him as if they came from the past.”

When the physician Lancelot Choice secretly provides the potion, Venetia's beauty is restored and soon other ladies of the court seem to be supernaturally renewed. But, like everything in life, there is a price to pay and an integrated layer of treachery involved in getting exactly what you desire.

[I received this book from Blogging for Books for this review.]
Posted by Cherdo at 1:08 AM