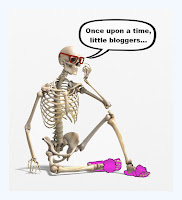 Welcome to the Bonehead Blog Hop!
Our motto:
"Confession is good for the soul...it may not

be your soul, but trust me - it's good for someone's soul."


Thanks to all the participants who are joining us today. They're the bravest of the brave!  While others strut and build up their egos, we look in the mirror and ask "what was I thinking?"  Pulling off a truly bonehead move requires skill and so, fellow boneheads (novice or pro), I salute you.

Let's get the ball rolling...

When I worked as a nurse, I loved patient care; it's a good place for my extra dose of empathy. That comes in handy when you work with people who sick. As the profession became more and more about paperwork and avoiding litigation, I liked it less.

A promotion redirected me to administrative nursing jobs and I found I was pretty good at compliance, quality assurance, and tedious research. As time went on, I kept going up the ladder (it was a step ladder, truthfully) till I managed a department at a state level government program. I loved, loved, loved it and poured myself into it.

My husband seriously thought my career would lead to my death - I'm one of "those" who obsess and get lost in work. With the duties of mom, wife, teenager wrangler, housekeeper, dog slave, cook and laundress to also attend to, there was a bit of truth to it. I kept pushing myself.

One day, I came home and told Hubzam that my job was starting to get to me. That afternoon, I had totally zoned out and I just couldn't get myself going. That is very unlike me; I can always get a second wind. Maybe I was getting the flu, I thought. But no...no flu. I felt better after a few weeks and I was back to my old self.

Then that sluggish feeling returned. You have to understand that I have gone to work with a broken leg and waited till my lunch hour for an x-ray. I'm the employee the boss wants on payroll. If I say I'll be there - I'll be there, no matter what. Anyhow, the last thing I wanted to do was go to the doctor and say "Uh...I feel vaguely funky." Besides, every nurse on the planet knows that there's a hypochondriac on every corner that is on their way to the doctor to do just that.

Finally, my Hubzam insisted I go to the doc, so off I went (after work, of course). My favorite doc was a woman at that time and since we worked in the same field, we chatted and joked. While examining me, she had the weirdest look on her face.

Maybe it was because I was a week shy of being 6 months pregnant.

I'm a nurse, people...and apparently, a bonehead. All the "symptoms" fit but I chalked them up to working too much. My doctor started laughing and didn't really stop till I left. I almost told her to put her prenatal vitamins where the sun don't shine, but they don't come in a suppository.

Gonzo kicked for the first time on the way home. He could have clued me in sooner! I thought I heard him whisper in a baby voice, "You have 13 weeks to get used to this idea."

In my defense, I'd been told I couldn't have another child due to some problems when I had Magoo...and I believed it.

ANSWER TO YESTERDAY'S TRIVIA: Mike of Billions of Versions of Normal got it right! It's Bobcat Goldthwait.

It's not too late to join us! Sign up and tell you tale. Confession is good for the soul.

The NEXT Bonehead Blog Hop will be October 5th (we're doing it bi-monthly...six times a year, peeps). That's plenty of time to do something new or remember something old. Stake your claim on the Bone Throne; but first, you'll have to top these folks: