BOTB: "Take Me to the River" 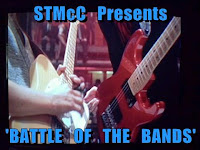 It's that time again; get  your crazy train ticket in hand!

WELCOME TO
the
BATTLE OF THE BANDS!! aka, BOTB.
Our battles take place twice a month ~ on the 1st and 15th.
The results come six days later ~ on the 7th and 21st.
That's when I return, add all of the votes, including mine,
and announce the winner. Feel free to return and see if your choice won!

I like to dip into the classics and here we go - are you ready to referee this battle?

The song "Take Me to the River" was written by Al Green (the Reverend Al Green!) in 1974 and has been covered by artists such as Levon Helm, the Commitments, Syl Johnson, FogHat, Tina Turner, Grateful Dead, Courtney Love...you get the picture. Never let it be said that Big Mouth Billy Bass didn't do his part, either. But he is not in today's competition!


Part of the Al Green legend included his humble beginnings, gospel singing with his brothers...and the fact that he was kicked out of the family home for listening to Jackie Wilson. He started another group that later became the Soul Mates and took his music on the road.

Al Green was an enormously popular soul singer in the 70s and had a mondo hit with "Let's Stay Together." At the peak of his success, he was born again (1973) and chose to abandon his career for a higher calling. Later, he became a minister and focused on Gospel music. By the late 80s, Al was beginning to do some of the old hits and duets with contemporary artists and eventually becoming comfortable with the music that made him famous and his gospel roots.

In March of 1995, Scottish singer Annie Lennox (formerly of the Eurythmics) released the album Medusa which consisted of mainly cover songs. One of those songs was...you wanna guess?  Maybe you can just listen.

David Byrne definitely has a style all his own - just like Al Green and Annie Lennox.

This Scottish born "American" artist is best known for his work with the band Talking Heads from 1975 to 1991. Solo work followed, but I'm stubborn and I always considered the Talking Heads to be his best stuff. The band reunited one last time in 1991 to play for their induction into the Rock and Roll Hall of Fame. I wish I was there.  :-(


Who will get your vote - Annie Lennox or Talking Heads?

Just look at all those wonderful blog buddies listed below (of course, I alphabetized it). If I missed a new participant, I'll add you as we go along. Let me apologize in advance...


ALEX CAVANAUGH
ANGELS BARK
BOOK LOVER
CHERDO ON THE FLIPSIDE
CURIOUS AS A CATHY
DCRELIEF - BATTLE OF THE BANDS
FAR AWAY SERIES
HOLLI'S HOOTS & HOLLERS
J.A.SCOTT
JINGLE JANGLE JUNGLE
MIKE'S RAMBLINGS
NOVEL BREWS
QUIET LAUGHTER
STMcC PRESENTS BATTLE OF THE BANDS
THE DOG LADY'S DEN
THE SOUND OF ONE HAND TYPING
THIS BELLE ROCKS
TOSSING IT OUT
WOMEN: WE SHALL OVERCOME
YOUR DAILY DOSE
Posted by Cherdo at 12:02 AM