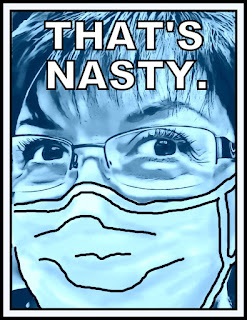 If I'm to survive, I've got to stop looking at the sidebar on YouTube. Its potential for absolutely disgusting information on video is endless. It takes a lot to turn my stomach, but all of the things that will result in a spontaneous rainbow yawn are probably on a YouTube video right now.

This started with the Battle of the Bands; oh, sweet irony. Searching for great, beautiful music and equally great covers of songs and one side glance and OH SWEET MOTHER OF SHERMAN WHAT IS THAT? Couldn't the icon picture be something...neutral? Like a caduceus with a plain colored background?

As much as I would like to get the government's hands off of mostly everything, I think I would be more than willing to make a nice exception in the case of the gross video. Someone should be writing a ticket and fining some of these jokers or creeps, depending on how you look at it. I'm thinking the "second hand smoke" argument could work here, too. It's affecting me negatively and I can't get away from it.

Funny pranks? I'm down with that. In fact, there's a whole show devoted to funny, harmless videos (I think...is America's Funniest Videos still on?).

But gross? I'm talking universally gross. Who wants to watch that?

Pull out your book of tickets, officer, and start writing. Instead of quoting a specific law, it would suffice to hand stamp it with big blue letters that say THAT'S NASTY.  Fine: $50.

The government may be too busy looking out for us (that was a joke...). Vigilantes may be necessary.

If you want to be part of this video policing vigilante group or avoid getting ticketed and fined, let me spell it out:

America, this could ease our deficit and put a lot of people to work writing tickets.