BOTB: "The First Cut is the Deepest" 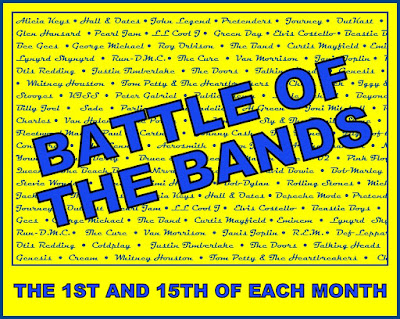 Jump on before crazy train leaves without you!

Our battles take place twice a month: on the 1st and 15th.
The results come six days later: on the 7th and 21st.
That's when I return, total all of the votes, including mine (if necessary),
and announce the winner. Feel free to return and see if your choice won!

This music blogging event first introduced by our friends
and I'd like to give them a heartfelt "thank you":
Fae @ Far Away Eyes
Stephen T. McCarthy presents...


You're on the train, the music is waiting - the question is:

He was born July 21, 1948, in London, England, and given the name Steven Demetre Georgiou, but that would change. From 1966 to 1978, he was known as Cat Stevens. Religious conversion came after 1978. With his passion to know God and learn more about the Islamic faith, he was reborn as Yusuf Islam and disappeared from the music scene for many years.

But miracles do happen. In 2006, he was recording once again and in 2014, he played for American audiences once more.

"The First Cut is the Deepest" was written by Cat Stevens in 1965 and recorded by American soul singer, P. P. Arnold in 1967 - but it wouldn't be the last time.

Cat still has IT, by the way. Time cannot diminish the impact of his sweet, heartfelt rendition.


Roderick David Stewart was born January 10, 1945, in North London, England. In the ranks of rock and roll royalty, Rod Stewart might be a prince...or maybe the court jester. With his unique raspy voice and custom gyrations, there's no one like Rod the Mod.

Stewart took his turn at recording "The First Cut is the Deepest" in 1976. Oh, peeps, you KNOW I was loving Rod back in the day.

This video also shows the standard Rod moves...I hope I get to ask him about those one day.

Sheryl Crow is a versatile and talented artist with a career that is shocking in it's depth. Music teacher, jingle writer, back up singer (Michael Jackson Bad Tour - not too shabby), guitarist, songwriter...she's a big bunch of wow.

"The First Cut is the Deepest" was one of her big hits. Not only does SHE still have it, but I don't really think she ever lost it.

Who did it better: Rod or Sheryl?  Does one of these able contenders jump off the page at you or is it close? Vote, peeps, vote!

And then, head over to the other participants' blogs and take part in their battles.