Thursday, September 10, started off as a relaxing day for Hubzam and I. He'd taken a few days off and we had armed ourselves with a "to-do" list and a general goal of trying out a new lunch spot.

Gonzo was reviewing his school work before leaving for classes at a local community college. Hey, wasn't this the toddler afraid of trick or treaters just a moment ago? Time has been flying by at a ridiculous speed. Hubzam and I have been especially proud of the college classes he was taking; get a jump on those courses, son! Technically, he is still in high school. He tapped into a scholarship that allowed him to take them for free. Mommy likey.

With a shout of "see ya later", we were off. That "to do" list was doomed to be reduced to zip.

An hour later, a received a call on my cellphone from a number I didn't recognize. Usually, I wouldn't even answer an unknown caller but for some reason, I did.

"Mom! Mom! I've been in a accident!" Gonzo shouted. I envisioned a frightened teenager standing next to a fender-bender on some unknown side street. The boy was so proud of his Honda Accord and a careful driver to boot.

"Tell me where you are, calm down - we're coming," I replied.

Soon Hubzam and I would discover that the intersection he directed us to was not the site of his accident. Grabbing my cellphone, I re-dialed the mystery number and asked for Gonzo again, telling him that he should look around for a street sign.

For a moment, Hubzam and I froze. We didn't know where he was - and he was trapped in a car. In all actuality, only a few seconds passed before we had the presence of mind to jump on the usual route to school and just trace his path till we got to him. As it turned out, we were only five minutes away.

What greeted us up ahead was shocking. Two large firetrucks blocked the road; an ambulance and an EMT vehicle were beyond the trucks and the highway patrol was present with lights flashing. With all the blocked traffic, we couldn't drive right to the accident. Being the bossy, frantic woman that I had become in that moment, I told (not asked...see what I mean?) Hubzam to park the car and let me out...he may have even stopped the car before I opened the door.

Running down the road, it occurred to me that my efforts probably ceased to look like running ten years ago - thus is the genetic betrayal that is my BMI. As I passed a rubberneckin' gentleman in a red pickup truck, he commented, "There's a dead body in that car."  He was pointing at the back of Gonzo's car.

"That's my son," I gasped as I passed him; I prayed the man was wrong.

Meanwhile, Hubzam had used his superior brainpower to figure out a way to drive closer to the wreck site. Rounding the firetrucks, I saw a car that had clearly ceased to resemble a Honda product. It looked like it might have exploded. A drape covered the driver's side and I could see a Spiderman shoe sticking out at the bottom, trapped in a halo of metal. I shouted him name and immediately I heard Gonzo's voice as he replied, "Mom!" 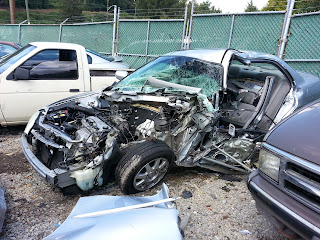 A fireman in the backseat of his car flipped the drape forward and I could see he was holding Gonzo's head in a brace and steadying him as they prepared to use the jaws of life to extract him from the car. Blood caked the left side of his head and ear. Time now crept by at an immeasurably slow pace as I watched them pull him out and overheard their comments to one another: "...broken legs...internal injuries...head injury..."

As they loaded him into an ambulance, I asked if I could ride with him.

"Not as fast as I'm going to drive, ma'am," the paramedic replied firmly and then smiled and told Hubzam and I to please drive carefully. 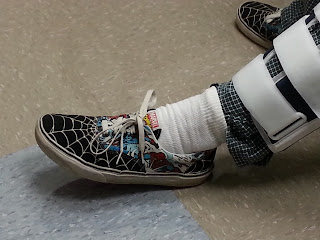 That drive seemed to take forever and I quickly contacted prayer buddies. Hubzam told me that wasn't important but I knew that both Gonzo and I would put someone on a prayer list for a whole lot less, fully believing in the power of prayer to change things. If you must ask to receive - then I was asking.

At the trauma center, we awaited the news and the chance to see him. And then the miracles began to stack up.


That's not to say that he did not get hurt; unfortunately, he did. Both knees were mangled and one was so deeply lacerated that glass and debris was found between the joint and patella. An opening in the surgery schedule allowed them to take him right in to the operating room and clean both knees up; another miracle.


Meanwhile, our pastors, friends and brothers filled the waiting area. Real brothers - you know, the Juggernaut and Magoo! Gonzo's best friend, who I shall call Not-Gonzo (they share the same name in real life), and his parents waited patiently with us long into the night. The presence of these angels had a calming affect on a tense situation.

Juggernaut and Magoo entertained the group and I prayed, "Please, God, let these boys remember three of these people are pastors..."

Finally, Gonzo was in a room and the next phase of healing began. After a round of IV antibiotics, they removed a drain from his knee and sent him home in a wheelchair. A few days later, as he reached for a bookbag, something snapped in his arm and we went back to the hospital to find that his arm was broken (also a result of the crash).  A lovely purple cast memorializes the trip. 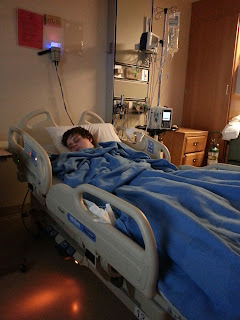 The EMTs and firemen made it clear that they had never taken a conscious person from an accident like that one. This could be a much, much worse story. Two bad legs, one broken arm, pain, discomfort, multiple surgeries, but he is trying to keep a good attitude, in spite of it all.

I have my boy.

He didn't miss church on Sunday or Scouts on Monday. He had all his homework done for the co op classes on Wednesday. It wasn't easy getting there, either, peeps.

I'll bet you thought I was using the LOAF coupons.

Today, Gonzo returns to surgery. It may not be the last one but each step takes him closer to recovery and I'll go with that for now. If you're a prayin' man or woman, send some his way for healing and pain relief; it will be appreciated.

Blogging and comments will be sporatic, friends, but I'm around and I'll be back to regular posts in the future. To everything there is a season. Don't forget me till then.