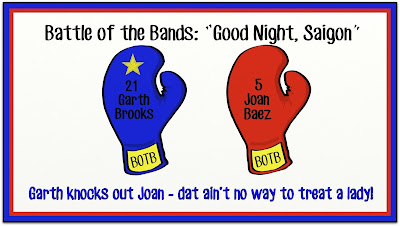 Whoo-ah! That wasn't even close. Perhaps it was the serious Kennedy honors staging, the elderly reflective Billy Joel in the audience, or the jaunty cowboy hat - but Garth won it, fair n' square.

Seriously, though: anything that calls attention to veterans and their sacrifices gets a thumbs up from me. This isn't Billy Joel's personal story anymore than "Downeaster Alexa," but the man knows how to use song to tell a story. Love him or hate him, he has undeniable talent. He's the piano man, right?

But there was a steady flow of "Billy owned it" and so, I'm gonna let a younger piano-man-Billy sing us out...

Our battles take place twice a month: on the 1st and 15th. The results come six days later: on the 7th and 21st. That's when I return, total all of the votes, including mine (if necessary), and announce the winner.

Check out the results of the other battles!!