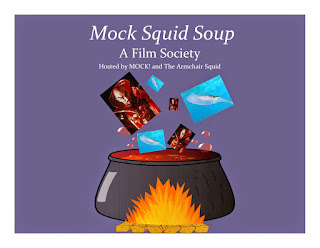 MOCK! and The Armchair Squid are the proud hosts of Mock Squid Soup: A Film Society, with meetings on the second Friday of each month.  Last week, society members posted three clues as to their chosen film for the month.  Today is the big reveal!

These were my clues:

1. There's a marriage proposal...but she has to refuse...
2. An amputee blames the guy who proposed for his woes.
3. Lunar influences on humans fuel some of the events.

Did you guess it? If you were Nancy Mock, the Armchair Squid, Mike, or Alex J. Cavanaugh and guess Moonstruck, then YES, you did guess it! 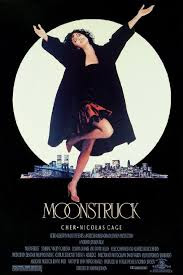 Released in December of 1987, this romantic comedy really struck a chord with me (and Hubzam). It's a favorite of ours and so quotable (a requirement of all the movies on my favorites list).  It Cher, Nicolas Cage, Danny Aiello, Vincent Gardenia, Olympia Dukakis and MY favorite: Feodor Chaliapin, Jr. More about him later.

Cosmo (Vincent Gardenia), Loretta's father, isn't too keen on Johnny and doesn't want to pay for the wedding.

Widowed accountant, Loretta Castorini (Cher), is an Italian-American living in her parents' Brooklyn Heights home and contemplating marriage to her boyfriend, Johnny Cammareri (Danny Aiello). Johnny is rushing off to Sicily to the side of his dying mother. Johnny is a bit of a mama's boy.

Before he leaves, Johnny asks Loretta to invite his estranged brother, Ronny, to the wedding. Superstitious and fearful of any bad luck pre-wedding, Loretta agrees. Her first husband had been hit by a bus and surely that was because of something they did wrong, right?? RIGHT?

Ronny (Nicholas Cage) is quite a weird, mysterious character. A baker by trade, he blames his brother, Johnny, for distracting him and causing his hand to be mangled in a bread slicer. Loretta wants desparately to fix this relationship and get Ronny to come to the wedding. In his upstairs apartment, she cooks a meal for him - and the sparks fly between them.

The full moon is inspiring romance all over town. Cosmo's brother, Raymond (Louis Guss) and his wife, Rita (Bovasso), meet Loretta's parents for dinner and Raymond tells the tale of Cosmo's great love for his wife, Rose (Olympia Dukakis) and how the great moon represented his love for her. In Raymond's mind, the moon has a little sumthin'-sumthin' to do with all this romance.

One thing leads to another, yada yada yada...the next morning, Loretta realizes she has made a huge mistake. Ronny, however, is not convinced and agrees to leave her alone if she goes to the opera with him. Loretta gussies herself up with a new hairdo and dress and meets Ronny at the opera where they run into (egads!) her father and his mistress, Mona.

Meanwhile, Rose is eating alone at the neighborhood restaurant when she sees a local college professor get dumped by his much-too-young-student-date (methinks that is not a word...but it needs to be one). She invites him to her table to talk about the ups and downs of men pursuing women. As Rose says, she thinks they do it "because they fear death." The professor walks her home and makes a lame move on her, too, but she stands her ground because she knows herself.

[Side note: Any husband of mine who would consider chasing women should fear death, though perhaps not the way she means. Back to our story...]

Cosmo's father (played by Feodor Chaliapin, Jr.) sees Rose with the professor and gets the wrong idea.

Back at Ronny's place, the plan to leave Loretta alone if she goes to the opera fails miserably and once again...yada yada yada...next morning...

The whole gang ends up at the breakfast table back at Cosmo's - including Ronny. Everyone has something on their mind: Loretta and Ronny sorting out their yada yada, Raymond and Rita looking for a deposit lovestruck Loretta never made, adulterous Cosmo facing his daughter, suspicious grandpa giving Rose the evil eye, and last but not least - Johnny is back from Sicily.

It's one of my favorite scenes of all the movies I've ever watched; especially grandpa's reaction to all the hubbub.


If you haven't seen Moonstruck - get with it, peeps! I love this film and I've talked myself into watching it again.

The next meeting of the Film Society is March 11 when we will pick a movie from one of our film-mates long list of reviews and give it a shot ourselves. New insight? Interesting commentary? How could it be anything but fun? Join us!

Now, check out my fine film peeps, too, and thanks for stopping by!