BOTB Results: "Come As You Are" 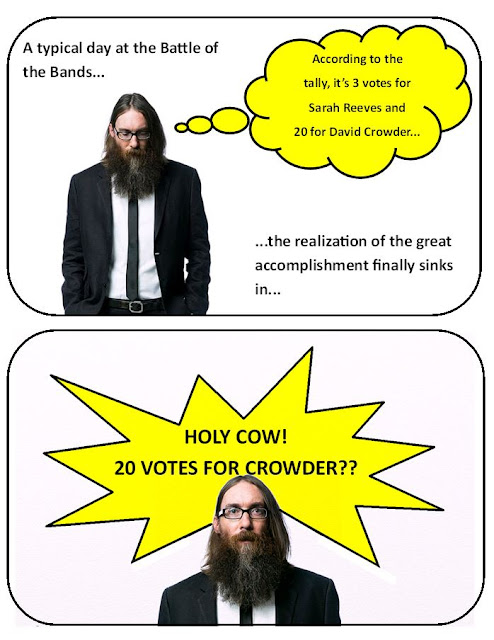 That's right, friends! David Crowder ran away with this battle and that is notable! Sarah Reeves' version of "Come As You Are" was beautiful and moving but in the end, I side with the majority.

David Crowder started his career in music in an non-typical way while a student at Baylor University. Realizing that more than half of the students at this Christian university didn't attend church, Crowder and Chris Seay started the University Baptist Church in Waco, Texas. As a pastor there, he also led worship (plus music) and was soon approached about sharing his musical gifts with a wider audience. An album, Pour Over Me, followed in 1999 and the rest is musical history, as they say. After nine albums, the original David Crowder*Band disbanded and he went on to record as just Crowder.

One reason I like the David Crowder story is that he started a church while a student at Baylor. He pastored, he sang. He saw something lacking and didn't just "think" about doing something; he actually DID something. Regardless of your particular beliefs, I think we can all agree that we need more young people like that. It's inspirational.

So, let the humble victor sing us out with another song - the first one that brought him to my attention. Hope you like it!


Now, don't forget my friends and fellow Battle-mongers of the musical modes, and I'll see you back here on the 15th: